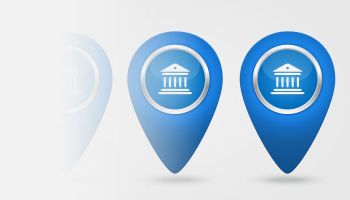 Since the start of 2007, Citigroup Inc. has been trimming the U.S. branch network it spent years rapidly building in the early-to-mid 2000s.

Since the start of this year alone, Citi has closed 54 branches across the U.S., compared to 37 last year. The bank has sold 64 branches over the past year, all in Texas, and Bloomberg reported earlier this year that Citi is looking to sell about 50 branches in California and all 16 of its remaining Nevada branches. 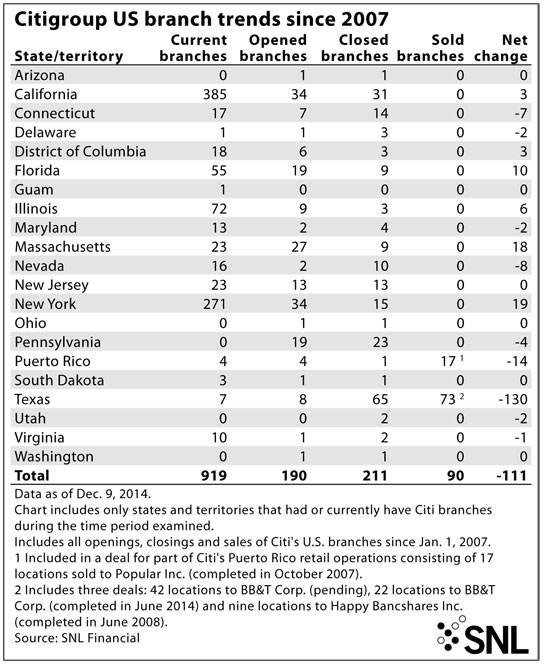 Citi gets ahead of the trend

Among the top five U.S. deposit holders as of June 30, Citi, at No. 4, is by far the smallest by branch network size, with only 919 branches as of Dec. 9. The other four institutions among the top five deposit holders, Bank of America Corp., JPMorgan Chase & Co., Wells Fargo & Co. and U.S. Bancorp had a combined 20,139 FDIC-insured branches. Total bank branches in the U.S. have declined every year since 2009.

While branches have been shrinking at Citi, deposits grew between the 2013 and 2014 third quarters, although deposits were down slightly between the second and third quarter of this year. Citi grew its total deposits to $466.8 billion from $447.6 billion, or 4.29% year over year, in the most recent quarter.

During Citi's most recent earnings call, CFO John Gerspach responded to an analyst's question on flattening deposit growth by stating that the company feels it does not need to grow its balance sheet much more in order to serve the bank's clients, according to a transcript of the call.

Gerspach also stated earlier on the call that the bank has, "continued to resize our North America Retail Banking business in the third quarter, taking costs out of our mortgage operations and rationalizing the branch footprint, all while continuing to grow our franchise."

Citi's largest "branch rationalization" efforts have taken place in Texas. Citi's footprint within the state has had the largest net decrease in branches among any state since 2007. The bank reduced its branch count in Texas by 130 in fewer than seven years, opening only eight branches, closing 65 and selling 73.

As of Dec. 9, Citi had only had seven branches remaining in Texas. 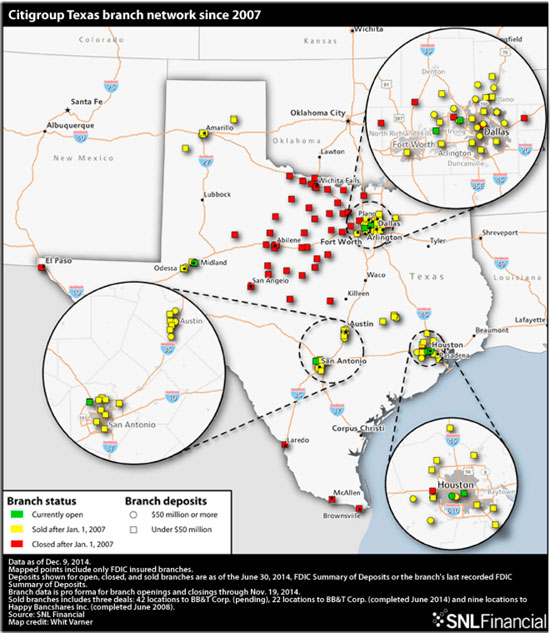 The 73 branches sold by Citi in Texas make up most of the bank's branch M&A activity in the U.S. and its territories since the start of 2007. Only 17 other branches have been sold by Citi in that time frame, all in a deal with Popular Inc. which was completed in October 2007.

The Texas branch sales occurred in three separate deals, one deal with Happy Bancshares Inc. in 2008 for nine branches, and two recent deals with BB&T Corp. for 64 branches. Citi completed one deal with BB&T in June for 22 branches and has a second deal currently pending for 42 branches.

The demographic profiles of the metropolitan statistical areas (MSAs or metros) where Citi holds, sold, and closed branches have stark differences. All of the branches that Citi has retained in Texas are in major MSAs, while the branches they sold and closed are spread out in less populated and less affluent metros across the state. Since 2007, Citi's Texas branch network breaks down as follows: 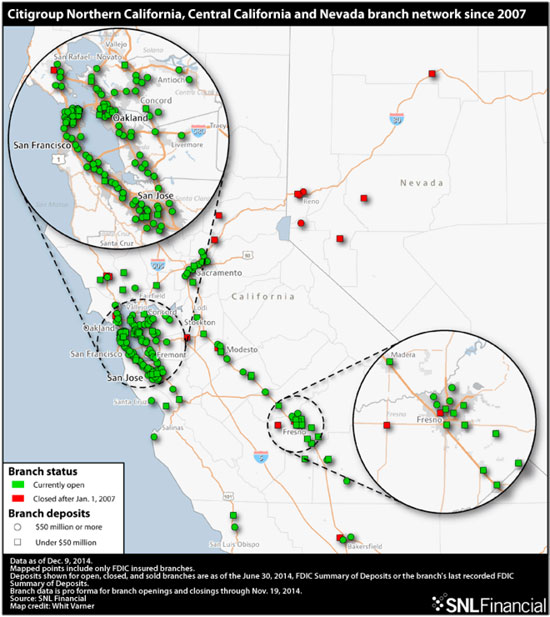 Citi's California network has had its days in the sun

Unlike the heavy branch activity in Texas, the bank's California branch network remained relatively unchanged over the past seven years, adding a net of three branches in the state to bring its total to 385.

However, between a report by Bloomberg in April that Citi is looking for a buyer of about 50 branches in the Central Valley area and the company's continued efforts to focus on its core affluent metropolitan areas, there may be a number of Citi branches closed or sold within the next couple of years.

The targeted branches, which hold some $3 billion in deposits, were said to be in the rural areas from Sacramento to north of Los Angeles. Their sale could bring Citi more than $100 million. Bloomberg's sources added that the sites in Los Angeles, San Francisco, and San Diego would likely be kept.

The demographic and geographic profiles of the six largest metros where Citi is likely to keep branches, the 16 less populated metros where Citi may be looking to sell branches and the metros where Citi has closed branches since 2007, practically mirror the trends in Texas. Citi's California branch network breaks down as follows: 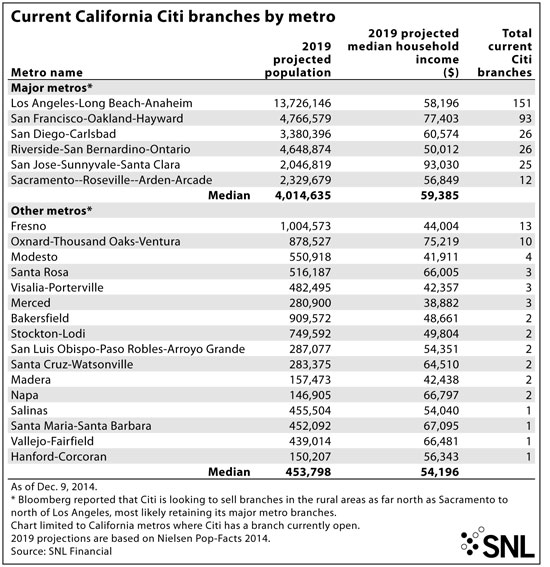 Citi no longer willing to gamble on Vegas network

Citi's Nevada branch network has had a similar geographic trend to Texas and California over the past seven years. The company has closed its branches in the less-populated parts of the state, including the branches connected to its 2008 sale of customer account relationships to Wells Fargo in Reno, Sparks, Carson City, Elko, Winnemucca, and Yerington, Nev. The deal also included customer account relationships in Auburn and Grass Valley, Calif.

According to the press release, Wells Fargo acquired approximately $500 million in deposits and $60 million in loans. No physical branch locations were exchanged; however, Citi closed its branches in the locations included in the deal.

Citi has retained only its branches located in the Las Vegas metro.

• Located in the Las Vegas-Henderson-Paradise MSA

Earlier this year Citi reportedly planned to cut 160 jobs in Las Vegas in its banking and loan transaction operations. This follows approximately 760 layoffs by the bank in Las Vegas during September 2013, mostly in mortgage sales, underwriting, fulfillment and default positions.

According to the April Bloomberg report, Citi had been looking to sell its remaining 16 Las Vegas area branches but was unable to find a buyer.

Editor’s note: SNL reached out to Citi for commentary on this story but did not receive a response. 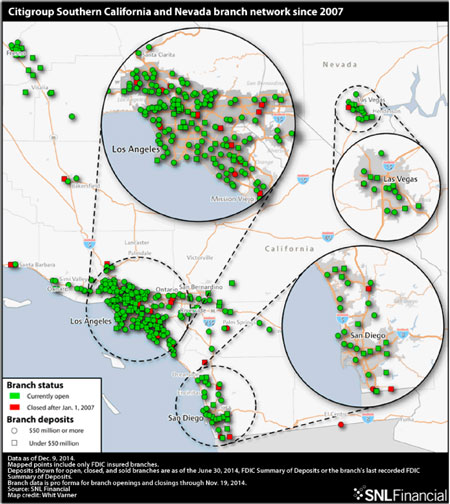