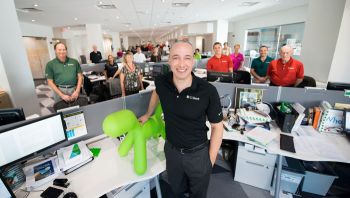 CEO’s space is like everyone else’s at C1 Bank. Green dog statues, bought as a toy for Trevor Burgess’s young daughter, are now in every location.

Ten years of doing IPOs at Morgan Stanley gave Trevor Burgess a desire to run his own business. It also exposed him to a wealth of innovative ideas, which, along with his own, he’s bringing to bear at a Florida bank he now runs.

Burgess, now 42, left Wall Street in 2007 and joined with one of his Morgan Stanley clients, Marcelo Lima, a Brazilian entrepreneur and investment banker, to explore entrepreneurial opportunities. In 2009, in partnership with two other investors, they invested $70 million to acquire Community Bank of Manatee, a bank on Florida’s Gulf Coast with assets of $260 million.

Since then, Burgess, who became the bank’s chief executive, and Lima, a director, have acquired three more banks. Now called C1 Bank, the St. Petersburg-based institution has grown to $1.5 billion with 31 branches, most of them on Florida’s west coast, with a handful in the Miami market. It is the sixth fastest-growing bank in the country, and had first-quarter net income of $3.2 million. The bank went public last August.

Burgess and his team have fashioned C1 Bank to be the bank for entrepreneurs. One of the companies Burgess helped to take public was Chipotle. A lesson he learned from Steve Ells, founder of the restaurant chain, was to do a few things and do them very, very well. So the bank largely focuses on business loans—large and small (it is a big SBA lender)—and overall has a limited range of products.

C1 Bank is a beehive of innovation, with a tech lab and a headquarters office set up like a Wall Street trading floor.

The three reasons that clients choose to bank with us are speed, service, and certainty. Not being a banker before was very liberating. I got to design an entire [loan] operation where the appraisal is the longest step in the process.

While big national banks can take three-plus months to close a large commercial loan, we’re trying to do that in three or four weeks. And if we need to say “no,” we do it quickly.

The next leg is service. Too many banks have hired ex-telco sales people to become hawkers of loans. That’s not our shtick. We hire very smart, very capable loan officers—relationship managers who are able to actually give old-fashioned banking advice to clients.

Leg three is probably most important, and that is certainty—doing what we say we’re going to do. We hear from clients all the time: “ABC Bank promised me X, but when I got to closing, it was different.”

We’re not going to be as cheap as a big bank. They have a much lower cost of funds. But we can have greater certainty because when we say we can do something, we are able to actually do it. But the proof is in the pudding, right? So last year, we grew new loans by nearly half a billion dollars. A billion-five bank adding $500 million of new loans means a lot people are choosing us.

Q2. With that kind of growth—plus expansion in southeast Florida—how do you retain your three attributes?

The number one challenge of growth is maintaining your culture. We are focused on hiring the right people. So when we went into Miami, I didn’t start by opening up five branches there. I literally started by hiring one person and setting up a loan production office.

After a year, I saw that we could get the type of clients that met our risk profile, and then we decided to open one branch. That went very well, so we added a second, third, and a fourth branch. Over 75% of our loans now were originated by C1 Bank as opposed to being from one of the four acquisitions.

Q3. Why did your focus shift from acquisitions to organic growth?

Simply because of the amount of organic growth opportunities we have. My whole infrastructure exists already. If I go and buy a bank that has $300 million to $400 million of loans, I’ve got all their branches and all their people, plus all of their problems and contracts and their costs. As long as you have your own growth, the economics of doing an acquisition doesn’t work when people want a premium to book value.

In a slower growth market, though, acquisitions may be the best way to grow.

Sometimes you need acquisitions to get to the right scale. One of the reasons we did four acquisitions was to get to the scale where we could make money and have all the compliance people we needed and be able to afford a high-quality chief credit officer and others like that.

Q4. As a former investment banker—and a bank investor—are you surprised that nobody is starting up banks?

I’m not surprised. The prospects are limited by several factors. One is the level of regulations. Dodd-Frank and CFPB didn’t exist ten years ago. Number two, with Basel III, capital requirements and regulators’ expectations about capital are higher. Except in markets that are clearly underserved—which is hard to fathom—it’s difficult to imagine a new bank is the best investment opportunity available.

If you read FDIC’s Quarterly Banking Profile, the number of institutions is dropping by between 75 and 100 per quarter. That rate may slow down a little bit with fewer failures, but consolidation is winning out over de novo charters.

We either need very large regulatory relief and/or a higher interest rate environment for a whole sector of community banks to thrive.

Q5. Do the so-called neobanks—tech-driven startups that offer a niche banking service—concern you?

But I think the long-term trend is in the application of technology. The banking industry will need to innovate rapidly in order to make sure it can do business in the most productive way, and in the way that is easiest for our clients to do business with us.

That’s one of the reasons why we have one of the only fintech innovation labs within a bank, which we call C1 Labs. We had an organic need for products that did not exist in the marketplace—tools we felt were required to run our bank in a first-class way—so we started building them ourselves. One, called Smart Loan Express, helps banks estimate the profitability of the next loan they’re doing. We’re now offering it to other banks. [C1 Bank partners with CenterState Bank of Florida, N.A., to distribute Smart Loan Express.]

Q6. You’ve been opening branches. What’s your view of their role?

I view the branch as a billboard. If you look at some of our branches—Google “C1 Bank Wynwood” or “C1 Bank Sarasota”—you’ll see they are designed to say something about who we are and something about the community we serve. So in Miami-Wynwood’s Arts District, we opened a branch that looks like an art gallery and has original art by Andy Warhol and Keith Haring—on loan from a client—hanging on the wall.

But I think that, long term, branch profitability has fundamentally changed. When we move into Fort Lauderdale, we will open one branch, maybe two—not 20, or even five.

I would rather have one very vibrant branch than dilute my brand with branches on random corners.

Q7. You’ve taken an unusual approach to your headquarters office—space without walls. What was behind that?

My inspiration was, in part, my Wall Street experience working on a trading floor at Morgan Stanley and, in part, technology companies. Meeting our speed and service and certainty requirements to our clients required a different sort of set-up at our headquarters. So we have, basically, a large trading floor with 110 identical desks. If you’ve ever been on a trading floor, there’s a lot of energy, a lot of information interchange. Problems are solved immediately; there’s no need to make an appointment with somebody. You just yell, and you get the answer.

We do have many glass-walled conference rooms. But the main set-up is right in the middle of the floor—and open. I can see everybody and they can see me, and we have no secretaries, and we have no offices. If you want to solve a problem, you can come talk to the CEO any time.

I’m trying to do something very different—bringing an entirely new energy and enthusiasm to an industry that over the past five years has been pretty dejected.

This article originally appeared in Banking Exchange magazine in the Seven Questions department.