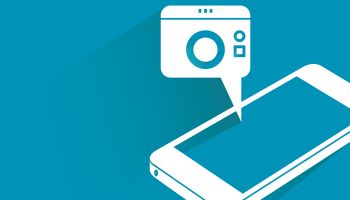 The camera is key for businesses looking to engage with millennials, according to a survey by Mitek and Zogby Analytics.

The firms’ poll of more than 1,000 consumers aged 18-34 clearly show that millennials want to digitize all commerce through their mobile camera.

Further testimony to the camera’s centrality” The survey also found that millennials, who represent 90% of smartphone users, love to take selfies. More than one quarter of the respondents take more than five selfies daily.

Overall, and more seriously, “millennials love the convenience of taking a picture for data capture and they want to be doing more of it. In fact, 68% said that they would rather always use mobile capture instead of manually typing information on their smartphone. Businesses need to take notice and add mobile capture to their apps, because just being mobile isn’t enough anymore,” says James DeBello, president and CEO, Mitek.

The survey found that banking is the top industry where millennials wish there was more mobile capture functionality (40%). More specifically, when asked what they’d like to do in the future:

• 19% said pass funds between friends by taking a picture of their debit cards.

• 21% said they’d like to establish a budget by taking a picture of their paycheck, bills, and bank statement to allocate where funds should be distributed.

• 39% said they would like to verify their identity with a digital ID instead of showing a driver's license during in-person transactions.

What millennials do with their cameras/phones

Additional findings from the survey include:

• 86% of respondents make purchases and conduct transactions from their mobile phones, with 11% doing so daily.

• 42% have made a decision on where to spend their money, or switched companies based on what the organization allowed users to accomplish with a mobile device.

• 68% would prefer to always use mobile capture instead of manually typing information on their smartphone.

• 28% percent want to enroll for everything from a new credit card to a gym membership by snapping a picture of their driver’s license.

• 68% of millennials had their first exposure to mobile capture with mobile check deposit.

• 54% said that security trumps convenience when using a mobile device.

• Top barriers stopping millennials from using their smartphones more are concerns about data security (53%) and concerns about identity fraud (52%).

• 30% have never abandoned a mobile data entry process, but of those who have, the primary reason was that the function was “too slow” (31%).

• 54% said that security trumps convenience when using a mobile device and 86% are willing “to take a few additional steps to verify (their) identity when opening an account or enrolling in a new service”.

• When it comes to providing proof of identity, 61% prefer the fingerprint, while they’d also accept newer forms like facial recognition (32%) or voice recognition (29%), or the old signature validation (21%).

• Their top concern with this method of exchanging money with friends has little to do with the personal reluctance: 67% worry about the money getting to the person it’s intended for.