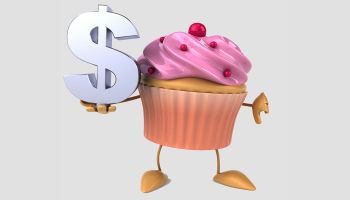 For much of its recent history, $301.3 million-assets Federal Savings Bank of Dover, N.H., has been a different kind of small thrift than the usual. It has been running loan-to-deposit ratios much higher than 100%—typically in the general area of 120%, give or take—as it has enjoyed a steady state of asset growth. And in recent years, as the New Hampshire seacoast has enjoyed growing prosperity and an influx of new banking brands anxious to grab a share of that, it had sat out the accompanying battle for local deposits.

“We hadn’t been a player,” explains James Brannen, executive vice-president and CFO. The bank had held onto the deposits it had, through the loyalty of a long-term customer base, but decided to stay out of the bidding war—its market has seen a major influx of competitors. Instead, the bank did a great deal of wholesale borrowing from the Federal Home Loan Bank of Boston, using short-term, low-rate borrowings to fund its growing loan base.

With talk going back several years now of an “impending” Federal Reserve rate increase—regulators have been warning of the risk of rising rates for a long, long time now—Brannen says that management knew it couldn’t rely on the cheap short-term money forever. Plans were formulated for laddering this funding out in longer-term forms available from the home loan bank, to preserve some of the lower-rate advantage.

That is, plans were made, but “we held off as long as we dared,” says Brannen. Management kept watch on the pulse of its asset-liability mix and on the Fed, with the assistance of Darling Consulting Group advisors, and, with the central bank continuing to hold off, benefited from several years of a continuing lower cost of funds with resulting better margins.

As the likelihood of a Fed increase began to look more and more certain, the bank began to get ready to activate the plan to extend the terms of its borrowing. This was back in April and May of 2015. Meanwhile, the consulting firm began running simulations to see how the bank’s nonmaturity deposits would behave with a rate hike.

Then the bank and its consultants began to wonder if Federal Savings could replace the borrowings with cheaper deposits. Some experimentation with various offers occurred, and then the bank spotted a unique opportunity: The bank was turning 125 in 2015.

Federal Savings began scouting around for what local and regional competitors were paying for deposits and realized that a money market deposit account offer priced at 1.25% APY, tied to the bank’s anniversary, would be very attractive and also cheaper than where the blended rate of the laddered borrowings would amount to.

The bank launched the offer in later June, promoting it through print and radio ads as well as social media channels. New customers who brought in a minimum of $75,000 for their MMDA could receive the special rate, and existing customers could qualify if they brought in $25,000 in new money.

The results were stunning. The special MMDA offer appealed to savers—only retail customers were eligible—and the “Milestone Money Market Account” brought in $22 million in new funds, according to Kelly Glennon, vice-president of risk management and retail banking. Glennon says that the offer brought in $145,000, on average, in new money from existing customers. In addition, among the new customers, 78% signed up for ancillary services when they opened their new deposit accounts. And nearly half of the accounts opened under the MMDA promotion represented customers who were new to the bank.

This worked well towards the bank’s strategy of replacing wholesale borrowings, but its success didn’t stop there.

To attract longer-term funding, the bank doubled the offered rate to 2.50% APY for a five-year CD or IRA, with a minimum deposit of $1,000. This offer brought in $12.1 million in new funds.

“Our timing was good,” says Brannen. “We found that retail customers were growing frustrated, waiting for deposit interest rates to rise. And our competitors weren’t as hungry because they weren’t as liability-sensitive as we are.” 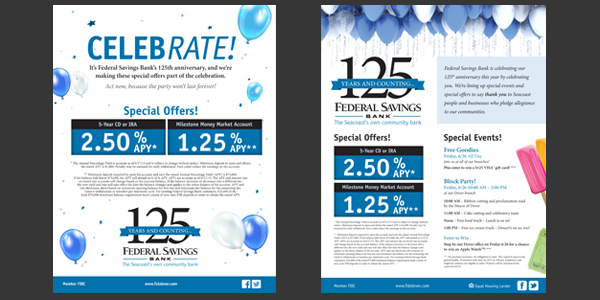 Brannen estimates that the bank will wind up saving 22-40 basis points by shifting over to deposits, raised through the dual offers, instead of going with the laddered borrowings.

“This has materially improved our interest rate position,” says Brannen. Wholesale borrowings have already been cut in half, even as the bank’s high loan-to-deposit ratio, with continuing asset growth, has held steady.

Glennon says that the bank took the deposit offer and the anniversary as an opportunity to reemphasize the local bank’s connection to its market, which had seen so many new, competitive brands encroaching to take advantage of seacoast prosperity.

The city of Dover declared June 26th “Federal Savings Bank Day,” which helped put the bank on the local calendar. The bank marked the day with festivities including a free lunch provided at the Dover branch by a food truck and free dessert, coming from an ice cream truck. Prize drawings were held, including one for an Apple Watch.

The bank had already been planning to increase its live customer calls, and this was emphasized with a “feet on the street” day. A team of Federal Savings bankers fanned out through the bank’s market and made 125 sales calls to promote the two higher-rate deposit offerings, as well as the full range of bank products. Prospects included both retail and commercial customers. The calling team included commercial lenders, business development officers, retail branch staff, retail lending staff, and bank executive officers.

Glennon says the outreach was quite effective, accounting for a good share of the offers’ success.

Of course, it is one thing to bring in deposits. The challenge is to keep customers in the bank. Federal Savings has been taking steps to improve its appeal to the community.

One step is remodeling branches, with all but one converted thus far to a café-style layout, to create a more consultative format. The bank’s offerings are increasingly electronic, but management is convinced that branches remain important.

“Customers still need a place to come and beef to, if something goes wrong,” Brannen says. “And even if they don’t come to the branches that often, they want to know those faces at their branch.” The shift in branch style is intended to demonstrate that the bank remains current, even as it proudly points to 125 years of local history.

Another is a stronger emphasis on sales. “We want to make sure we have a presence on the streets,” says Brannen. So the bank has put together a sales group of calling officers lead by a sales director, to increase familiarity with the bank. A sales lead and referral system has also been put in place.

This all is meant to build on strong customer loyalty that the bank already enjoys, being a local player.