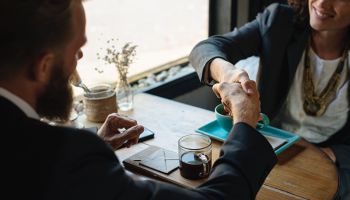 The nature of small business finance may be changing more than many realize, based on a recent speech by Randal Quarles, Federal Reserve vice-chairman for supervision.

Quarles, speaking March 26 at a HOPE Global Forum, told of recent meetings he had had with owners of very small businesses. He noted that their comments jibed with trends the central bank has seen. A key one is that small businesses still face gaps in available credit although more than two-thirds of those studied by the Fed request less than $100,000 and many less than $25,000.

Quarles said that the most frequently cited reasons for the denying these applicants were low credit scores and insufficient credit history.

This led Quarles to comment on related changes in small business credit sources.

“Large banks’ share of small business lending has grown,” said Quarles, “especially among the smallest loans. This represents a change from 20 years ago when small businesses relied more on a relationship with local community banks for access to credit.”

Quarles shared figures for loans under $100,000. He said that small banks of less than $1 billion hold 19% of such loans—versus 60% two decades ago. By contrast, he said, that 60% share is now held by banks with $50 billion or more in assets.

While industry consolidation may be causing some of this shift, Quarles said the nature of small business credit also has been changing.

“Our data suggest that the growing share of small business lending at larger banks may be partly due to their use of automated underwriting for credit cards,” said Quarles.

Quarles acknowledged that business cards expand the availability of credit to small firms, but that this form of credit lacks the flexibility of traditional loan forms and generally costs more.

“Personal or business credit cards may be suitable for purchasing supplies, but not for payroll,” said Quarles. He added that such credit, frequently evaluated by automation, may not fit business borrowers who don’t match standard lending criteria.

Community bankers frequently point to their ability to get to know small-business customers, enabling them to make loans that don’t fit the filters of automated credit evaluation.

Quarles next discussed nonbank alternative lenders. This included fintech specialists as well as large technology firms that extend credit to merchants who are part of their customer bases. (Quarles did not mention names, but examples of the former would include online lender Kabbage and the former would include Amazon, which grants credit to small firms that are part of its base.)

“Several of the businesses I met with mentioned they had turned to nonbank online lenders after being turned down by banks,” said Quarles. “Some online lenders obtain access to a prospective borrower’s accounting software, merchant accounts, shipping, and payroll data in real time in order to underwrite business. Business owners can receive funds in a couple of days or even hours.”

Some community banks have reported in conversations with Banking Exchange that they often find that they can refinance customers of online nonbank business lenders at significantly lower rates. Some banking organizations have been building online business lending platforms to compete with the speed and access features that fintechs specialize in, as well. Banks large and small have also partnered with fintech lenders of various types.

Quarles referred to ongoing Fed efforts to study the impact of fintech players and said that such firms were part of the reason regulators have been exploring modernization of Community Reinvestment Act regulations.

“The arrival of new financial technologies, along with significant industry consolidation and other structural changes, has changed the way that financial services are delivered to consumers and the ways in which banks lend in communities,” said Quarles. “We continue to study these shifts, and share the common goal of improving the current supervisory and regulatory framework for CRA to further the statute’s core objective of promoting access to credit and financial inclusion.”

A word on fair-lending and the Fed

Quarles, a Trump appointee to the Fed board, spoke of many aspects of consumer protection and credit accessibility during his speech.

One other area he covered was fair-lending examination and enforcement, recapping very briefly some of the cases the Fed has referred to the Justice Department for potential prosecution. These have chiefly concerned redlining and mortgage-pricing discrimination.

“In our redlining referrals, the Federal Reserve found that the banks treated majority-minority areas less favorably than non-minority ones, such as through lending patterns, marketing, and Community Reinvestment Act assessment-area delineations,” said Quarles.

In mortgage pricing, he continued, the Fed found cases of banks charging higher prices to African-American or Hispanic borrowers than it charged to non-Hispanics white borrowers. He said the higher prices could not be explained by legitimate pricing criteria.

In the context of his audience—Operation HOPE is a major advocacy and assistance organization for minority populations—Quarles comments would seem to add to evidence that fair banking enforcement will not go away under the Trump administration.

Read “How will fair banking fare?”