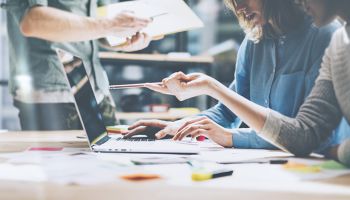 In our breakneck modern pace, we think we have it all figured out. As author Lewis Carroll once said, "The hurrier I go, the behinder I get."

See if this sounds familiar.

At BMO Harris, the marketing research team was launching creative without testing it. Why? As described in a case study on the website of Canadian data collection company Delvinia, this was due to time constraints given the volume and velocity of creative being produced for a variety of campaigns.

In addition, says Steve Mast, president and chief innovation officer for Delvinia, the lengthy cycle time and high cost of traditional market research projects contributes to the squeeze felt by many marketers in financial services and elsewhere. Without the ability to test quickly, they have no way to validate the creative in a timely way.

“We’re seeing some ill-informed decisions being made about product or creative,” says Mast, “because companies are not bringing the customer into the conversation.”

Mast quotes the chief marketing officer of a banking client, saying, “We want the customer to have a seat at the board table with us so when we’re reviewing a new marketing program, they have a voice.”

The market research industry, says Mast, is a proven one. It is very “church and state,” he says. By this he means that it strives to maintain the independence of a given project in order to provide accurate data even if it’s bad news. This model, however, runs smack into the increasing speed of change in business generally, and the need to quickly react to change.

“One of the challenges we find,” says Mast, “is that there are fewer researchers inside many businesses and they have more requests as business and marketing managers want that customer voice.” But the traditional market research approach takes four to eight weeks even for a simple concept test. Also the cost can be tens of thousands if not a hundred thousand to do a research program.

Under pressure, marketers may skip research altogether, only do initial research, or go around the traditional research firms and use do-it-yourself products like Facebook Poll or SurveyMonkey, according to Mast. These tools have their place, he says, but you can end up with “someone not trained in how to formulate questions using a tool that may develop leading questions and obtain wrong or misleading information.”

The resulting research, says Mast, could give a “thumbs up” for a product or campaign, which subsequently goes “completely sideways because they had the wrong data.”

Three and a half years ago Royal Bank of Canada, one of Delvinia’s long-time clients, was making major changes to its branch designs and wanted a “quick-turn,” less-expensive way to test various ideas. “They wanted a quick sense of what would work before they spent hundreds of thousands of dollars on implementing a change,” says Mast. In addition, the bank wanted access to the testing program so they could run it where and when they wanted.

“Basically we automated many of the steps that we would take working on a project like that, where multiple people would have been involved,” says Mast. The program worked and Mast says they thought, “Would anybody else want this?” The company subsequently launched an improved version of the original research platform called Methodify.

Mast describes what typically happens with a market research project and how Methodify changes that:

“Say I’m a marketing manager,” he says, “and I’ve got a new ad campaign. I walk over to my market research folks and say, ‘Hey, I want to test this.’ Market Research writes the questions or engages an agency to write the questions—this goes back and forth. Then Market Research engages a data collection company like Delvinia to use the questions to collect information from consumers. The results go back to Market Research and they develop their big PowerPoint presentation.”

With a platform like Methodify, says Mast, all those steps and organizations are compressed into one interface that gets the development and execution time down to 24 hours. A marketing manager who wants to test two or three product options can log in, he continues, clicks on audience he wants—say high-net worth individuals—and selects from numerous methodologies and other factors presented on the platform and uploads the concepts. When done configuring, the manager hits “send to launch.”

Mast says the software has many methodologies already set up—e.g. concept test, price sensitivity, product test, brand, in-market, out of market—about 30 of them, says Mast. Clients can also set up their own. Delvinia also partners with some market research companies to use their research methodologies under a licensing agreement.

So the Methodify platform doesn’t eliminate need for market researchers, Mast notes. “We’re almost ‘Uberizing’ them,” he says, “connecting them to brands they would have never connected to before.” Also, says Mast, “you sometimes need a researcher to come in and give you some more depth on the report.”

The program is not immediately sent to the consumer panels, however. Mast says Delvinia has an agreement in the contract that human eyes will always check the template before it goes live.

“We don’t want a rogue marketing manager uploading some inappropriate material,” he says.

The review takes five to ten minutes, Mast says, and then the research goes “live.,” meaning it is sent to one or more research panels. Delvinia owns some, some it has an arrangement to use. Delvinia’s U.S. panel, Mast notes, includes ten million people. Once launched, the marketing manager can log in any time to see the results.

The software selects a winner and allows marketing or business execs to dig in deeper to understand why, says Mast. When they do that, he adds, they may decide to take elements from one option and combine them with others and retest. The technology lets you test and retest easily and quickly for a flat fee of $5,000, says Mast.

“If you can do a test for $5,000 and get results back in 24 hours, you can run multiple tests for the same budget,” he says. That might prompt you to make changes to an ad or product before it launches. An agile process, in other words, much as tech companies do with their product development.