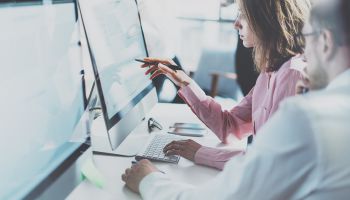 Marketplace business lenders frequently point out that busy small business owners’ lives often don’t synch with “bankers hours.” Being able to apply for credit with online players like Kabbage or OnDeck any hour of the day is a much touted advantage. It plays to the credit hungry who find their credit by Googling for it.

First Foundation Bank, an 11-year old $4.5 billion-assets bank headquartered in Irvine, Calif., gets that message. Lorrie Asker, senior vice-president, commercial banking, says she’s heard from many clients that they handle their finances and their banking between 10 P.M. and 2 A.M. In the Age of Amazon, everyone, she says, craves immediate online availability of services, including banking.

However, Asker adds, not every commercial banking question, nor every need, can be served through a website. That’s why as First Foundation has ventured into online commercial lending for small businesses, it has offered a platform that can be used directly by the user as well as in branches or in customer offices where branch managers or a loan officer can offer advice and answer questions as applicants seek credit. (Some marketplace platforms provide live counselors. See "Fintech business lenders evolving")

In addition to a human contact option, First Foundation offers something not always available through marketplace lending players: a bank interest rate.

“Our rates are more advantageous because we are looking at developing a full client relationship with these customers,” explains Asker. Small business marketplace lenders’ rates tend to be higher, and some banks pick up new customers by refinancing higher-rate online loans.

First Foundation has faced a double challenge as it works to increase its small business lending. While facing online competitors—Asker says Kabbage and OnDeck are significant rivals—the bank is a newcomer among banks, and has had to learn to be nimble to compete with established commercial banks.

As the bank continued to build out its business offerings, it brought in Asker and others to bring their C&I and small business banking experience to the bank’s markets. First Foundation is strong in southern California, but also does business in the northern part of the state as well as in Las Vegas, Nev., and Honolulu, Hawaii.

Working with Terri Hipwell, senior vice-president, commercial underwriting and processing, Asker came aboard several years ago to get the bank set up for business banking for both larger clients and small business borrowers. (Both had worked together in similar roles at Umpqua Bank previously.)

Online, but not everywhere

In April 2017 the bank set up its Small Balance Business Lending program, incorporating an online banking platform hosted by Mirador, a fintech provider, that customers can reach themselves through the bank’s website.

First Foundation saw online services as an adjunct to its community lending efforts. Users who enter out-of-market zip codes, for example, are quickly screened by the platform, which provides alternative means of reaching the bank if the would-be borrower has further questions. The bank at this point isn’t seeking to develop a lend-anywhere model, seeing online as another channel for serving its markets. The target for online loans is between $10,000 and $250,000.

Going into this, says Hipwell, the bank considered it important to have branch managers involved. At First Foundation they play an active part in developing the bank’s business market penetration, making calls. Part of the reason for acquisitions that the bank has made or has in the works has been to increase physical presence in markets it wants to serve with commercial lending and business services.

The online lending platform allows users to complete applications, including the ability to upload key documents or to link the documents from compatible electronic platforms in order to complete the loan package through the secure portal. Live bankers are available in branches during banking hours to answer questions or to assist applicants who need help with the documents or completing the online application. Just not at 2 a.m.!

Asker says that the bank can generally provide firm answers on the applications within two-to-three business days. (Marketplace lenders’ approvals are sometimes conditional, and this has caused complaints among some applicants who have thought they had been granted a loan only to find out that the “approval” was preliminary.)

“Our customers are getting met where they want to be met,” says Asker. The bank sees its approach as a combination of “high tech, high touch.” Making a personal connection easy to establish can also help the bank expand a credit relationship into a more-robust one, she adds.

Asker says that the bank has been working to establish its social media presence, which will help in reaching business owners who turn to the web to find lenders. As a newer player, she says, name recognition is a factor in growth. The bank has been enjoying steady loan growth over the last few years.

Given this trend, Asker says it’s likely that the bank will more than double the volume brought in through the platform in 2018. Beyond the credit production, she says, these openings have been built upon.

At present the platform’s applications rely on traditional credit standards, which first go through an electronic scorecard. This has already sped up the process for these smaller commercial credits. As the bank gets more experience, Asker says, alternative credit standards, perhaps more like those used by Kabbage and others, will be explored.