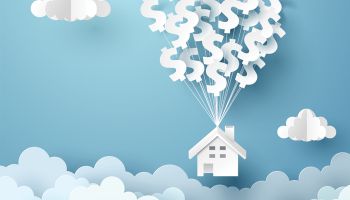 It’s a testament to the strength of the U.S. economy—and consumer confidence in that strength—that the housing market has remained strong, despite inventory and affordability issues and increasing interest rates.

In an interview regarding Freddie Mac’s weekly mortgage rate survey results, Chief Economist Sam Khater says that unlike other periods, such as 2013, when rising rates led to a decline in demand, “that’s just not happening this time, because the economy is doing so well. With an unemployment rate of 3.9% this is rare territory.” But the key factor is that consumer confidence is strong, and “confident consumers buy and sell homes.”

So the movement in rates, which are up about 50 basis points for the year, is not impacting demand at all, says Khater.

According to the Freddie Mac survey, the rate for 30-year fixed-rate mortgages for the week ending May 10 was 4.55% with an average 0.5 point—unchanged from the previous week. Nevertheless, rates have been moving up more or less steadily since the beginning of the year and before. During the same week a year ago, for example, the rate on 30-year fixed-rate mortgages was 4.05%.

Weak inventory and other headwinds

Higher rates have no doubt put pressure on the budgets of some home shoppers, Khater observes, but a bigger headwind that is keeping home sales from being higher than they have been is weak inventory levels.

The economist gives three reasons why the inventory of homes for sale is weak:

2. Shortage of buildable lots. Many small and medium-size builders and land developers went out of business during the boom and bust, says Khater, which pointed to how risky land development is. In addition, much of the demand for homes has shifted to urban areas, where very little land is available.

3. Rising costs and increased land-use regulations imposed by many municipalities.

Those three factors have put a huge crunch on home building. That’s why “we’re at historic lows in terms of inventory and why home prices continue to go up,” says Khater.

Despite these factors, Khater adds, home sales have continued to increase and demand will be strong.

“The market would be quite a bit hotter from a sales perspective if there were more inventory,” says Khater. There is a steady increase in supply, he adds, which is driving the market up, but the rate of sales is limited by the new supply that’s coming on. New inventory is getting snapped up as soon as it’s available along with existing homes that are being listed.

Slower-than-expected wage growth is another headwind limiting home sales, but Khater points out that interest rates, at 4.55%, “are still dirt cheap.” Income growth is modest and prices are up, he says, but still-low rates “have let buyers afford a lot of these properties.”

So far “the economy has overwhelmed the modest decline in affordability,” says Khater. But he acknowledges that rising rates are the risk in this equation.

Looking ahead on rates

With the Fed poised to raise rates one or two more times this year, and again beyond that, at what point do rates shut off home sales?

Khater says there is no particular level at which rates collapse sales. Indeed, he observes that even with double-digit rates in the late ‘70s, home buying continued strong because of the strength of the economy at that point. 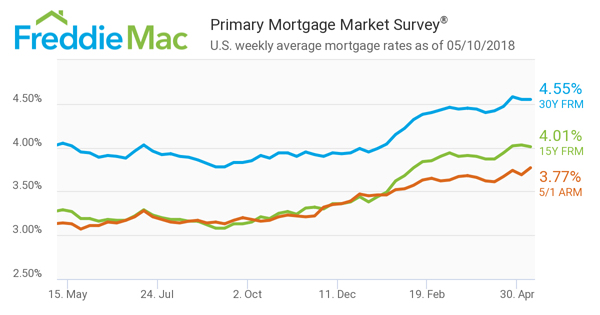 Rates for 30-year fixed-rate mortgages paused upward trend in the first week of May, as recorded by Freddie Mac.

The impact of the Fed’s rate hikes, Khater notes, falls mainly on the short end of the mortgage curve and on adjustable-rate mortgages. The Fed actions have “minimal impact on 30 year fixed-rate loan rates,” he says. The latter are more governed by supply and demand dictated mainly by the strength of the economy.

“Rates are rising now because of inflationary fears,” he says, “and the Fed is reacting to that—not driving it.”