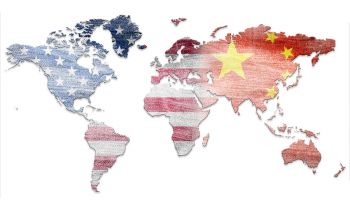 What was on top of the agenda at Davos this year? Concern over emerging technologies. Granted, the focus was more on the relationship between the United States and China, but it shows the link that the economy, geo-political risk, and financial institutions have when it comes to technology concerns. The link is not new. As reported by Banking Exchange, some analysts have speculated that the next financial crisis will likely come at the hands of a cyber attack as opposed to a traditional market downturn.

Worry is growing over how emerging technologies will disrupt financial institutions and thus the countries involved. In the midst of the technology concerns, two countries’ leaders were conspicuously absent from DAVOS: the United States and the United Kingdom. The UK’s Brexit problems go beyond technology, but do present specific issues surrounding their position on the world stage.

The United States has an even bigger headache in negotiations with a world economic power in China that continues to wage a global cyber war.  Just as the U.S. and China showed positive signs on a trade deal, U.S. investigators were putting pressure on  Chinese Technology company Huawei Technologies, accusing it of stealing intellectual property. While it is likely China and the United States will reach a major agreement on trade sometime in the next couple of months, President Trump will also have to reckon with other branches of the United States government putting pressure on China’s tech firms. The good news is that China needs the United States, in the end.  Their economy only grew by 6.6%, which means they need the U.S. as a trading partner.

What this Means for the Banking Industry

For the banking industry, this means that cyber security goes beyond simply compliance and avoiding fraud from sophisticated individual hackers, which is obviously extremely important.  Your bank is not just a target for the competitors in terms of market share, but also for other countries that would like to disrupt the American economy.

With that in mind, the banking industry can rightfully demand some federal aid to stop cyber-terror and demand legislation that defends the American banking industry.   It also means small and midsize banks need to make their presence known in Washington DC, as cyber attacks from abroad can come just as easily to smaller banks and they need a voice perhaps even more than the bigger ones.