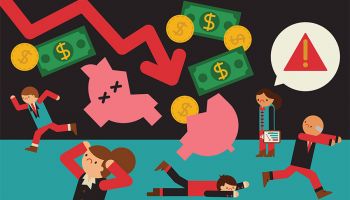 Analysts sighted falling interest rates when stating late Thursday that Bank of America will likely have a decline in profits and face tough times in 2020.

The concern came primarily from brokerage firm Raymond James, which downgraded the shares from an outperform status down to market perform. As other analysts have mentioned in recent weeks, Raymond James also focused on the shape of the yield curve. Since Bank of America is particularly focused on business lending and a deposit base, the bank is particularly susceptible to these signals.

Analyst Michael Rose wrote, “We now see its greater than peer asset sensitivity positing a greater challenge to net interest income given further flattening of the yield curve and the potential for several additional rate cuts from here.”

While the effects are particularly substantial for Bank of America, most banks will be troubled by slowing growth in net interest income. One thing, however, that could be argued against Raymond James’ move is that bank stocks have already struggled and are trading at reasonable multiples compared with other sectors.

However, the effect on slow growth from foreign economies could likely force further rate cuts and a slowing of the American economy. The brokerage firm also downgraded midsize banks due to the same trend.

Bank of America reported strong profits in July, beating analyst forecasts, yet the stock value barely budged. While the market went lower in August, Bank of America dropped in value by more than 7% without any negative indicators other than speculation.

The bank had warned earlier in the year of potential slowing of profits due to federal rate cuts. While lower rates do make lending for both consumers and businesses more appealing, the interest banks make on the loans get squeezed.

It is likely the forecast for Bank of America and its decline may say more about what Wall Street considers to be potential trouble ahead overall for the American economy that will affect large financial institutions.