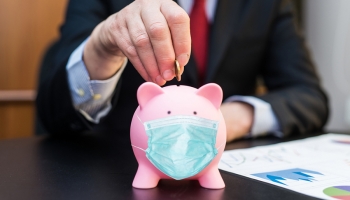 US banks’ income collapsed by 70% in the second quarter of 2020, compared with a year ago, according to new data from the Federal Deposit Insurance Corporation (FDIC).

Across 5,066 banks and savings institutions insured by the FDIC aggregate net income totaled $18.8 billion. This compared to $62.5 billion recorded in the same period in 2019.

The FDIC said the fall was “a continuation of uncertain economic conditions” due to the Covid-19 pandemic, which has led to banks significantly increasing their loss provisions in anticipation of a more difficult period ahead.

The net interest margin fell by 58 basis points from a year ago to its lowest ever level of 2.81%. Net interest income fell by $7.6 billion, or 5.4%, from the second quarter of 2019 – the third consecutive quarterly decline.

However, increased provisions and the banking sector’s healthy position at the start of 2020 meant that the industry remained strong and well-capitalized throughout the quarter, according to FDIC chair Jelena McWilliams.

“Although economic stress related to the Covid-19 pandemic continued to affect bank earnings, the industry has remained a source of strength for the economy,” she said.

“Lower levels of business activity and consumer spending – combined with uncertainty about the path of the economy and the low interest-rate environment – contributed to higher provisions for loan and lease losses, as well as a decrease in net interest margins.

“Notwithstanding these disruptions, however, the banking industry maintained strong capital and liquidity levels at the end of the second quarter, which will protect against potential losses in the future.”

The FDIC highlighted the effects of the Paycheck Protection Program (PPP), which saw banks and other lenders facilitate more than $482 billion worth of government-backed loans to small businesses to protect them from the worst effects of lockdown measures.

Total commercial and industrial loans increased by $146.5 billion, or 5.8%, during the quarter as a result of the PPP. Consumer loans fell by $67.1 billion as customers paid off credit card balances and spending fell dramatically.

In contrast to the collapse in net income across the sector, community banks reported an increase year-on-year, the FDIC reported.

“Despite a 273% increase in provision expenses to $2.4 billion and continued net interest margin compression, more than half of all community banks reported higher net income,” the FDIC said.

According to PPP data from the Small Business Administration, smaller banks and lenders accounted for half of all loans issued under the program – and even took market share off the country’s biggest banks in some areas.

Robert Strand, senior economist at the American Bankers Association, said: “Banks continue to shore up provisions to prepare for tougher times ahead in anticipation of additional losses stemming from the pandemic. The record surge in deposits in the first half of the year reflects the continued trust consumers and businesses have in their banks during these uncertain times.

“Looking ahead, banks remain a steadying force to support their customers and communities. America’s banks are highly capitalized, hold ample loss reserves, and have instituted strong risk management measures to ensure they can provide the credit needed to help the economy recover amid the evolving public health crisis.”