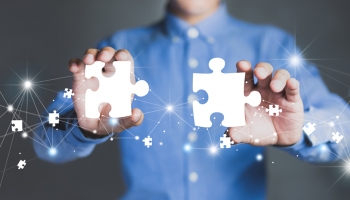 There were a record number of mergers and acquisitions in the global banking sector last year, although this did not translate into larger deal sizes.

According to data from Finaria.it, the number of banking merger and acquisition (M&A) deals hit over 1,300 last year, more than in 2018 and 2019 combined.

M&A activity in the banking sector since 2009 had been steadily decreasing until last year.

Figures from Statista and the Institute for Mergers, Acquisitions and Alliances (IMAA) show that the number of deals fell from 1,295 to 904 between 2009 and 2015 and continued falling in the following years.

Deal activity in the banking and capital markets sector slumped in the first half of 2020 as a result of the Covid-19 pandemic.

In the US, last year brought many smaller M&A deals but few large ones, in line with the Statista and IMAA data.

In December 2020, PNC completed the year’s largest deal for US banks with the acquisition of BBVA USA Bancshares and its US banking subsidiary BBVA USA in a deal worth $11.6 billion.

The transaction makes PNC the fifth-largest bank in the US with more than $500 billion in total assets.

Elsewhere, Bridge Bancorp, parent company of BNB Bank, and Dime Community Bancshares, which owns Dime Community Bank, agreed to merge in a $489 million deal last July. The deal completed at the start of this month.

The US banking sector is poised for a significant increase in M&A activity, according to a report from investment manager FJ Capital published in October.

It said community and regional bank M&A was already recovering quicker than expected and would improve further as the wider economy recovers from the impact of the pandemic.

The report suggested a sustained period of M&A activity could see the total number of banks in the US fall by as much as 50% over the next 10-15 years.