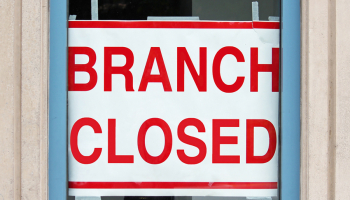 Despite bank branch closures nationwide and some banks’ networks shrinking, low-income neighborhood residents have the highest share of access to nearby bank branches, the association argued.

ABA researchers Hugo Dante, Veronica Carrion, and Tyler Mondres wrote in an article for the association’s website that it was promoting several initiatives to improve access to banking services for poorly served areas. However, the authors argued that these areas were “the exception, not the rule”.

The article was in direct response to an NPR report into the closure of bank branches across the US. NPR reported that US banks closed 3,324 branches in 2020, a record figure, citing S&P data.

It also stated that poor communities, rural communities, and areas with a large population of non-white people were most affected by closures.

However, ABA countered with its own data, which showed that low-income neighborhoods in urban areas had on average 18 bank branches within a two-mile radius, and 296 within 10 miles.

The data still illustrated that rural community access was poor, however: no economic group had access to a single bank branch within two miles.

“Analyzing branch proximity across racial and ethnic groups reveals similar results,” Dante, Carrion, and Mondres wrote. “On average, Hispanic and Black Americans are within commuting distance of 23 and 21 bank branches respectively, White Americans are near 26, and Asian Americans are near 36.

“While there is some variability across demographic groups, Americans of every background, across every income level, and neighborhood type, live in close proximity to a wide selection of bank branches.”

Banks have been reassessing their networks and physical premises for many years as technology has led to an increase in online and mobile banking. The Covid-19 pandemic accelerated this trend, as well as forcing branches to close to customers to slow the spread of the virus.

While the Office for the Comptroller of the Currency has stated that the pandemic was not a sufficient reason on its own for closing branches, several banks have still cut back on their locations, often citing the trend towards digital banking.

Midland States Bancorp, Five Star Bank, Byline Bank, and Colony Bank have all announced the permanent closure of multiple premises within the past 12 months.