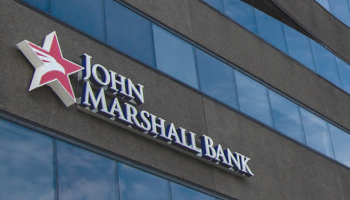 The parent company to John Marshall Bank said it planned to file the necessary paperwork with the Securities and Exchange Commission before launching its shares on either the Nasdaq or NYSE exchange.

In a statement this week the company said it expected the process to take 12-18 months.

Chris Bergstrom, president and CEO of the bank, said increased capital and better liquidity for shareholders would benefit the bank “as we embark on our next stage of growth”.

He added: “We believe that becoming a publicly-traded company and listing on an exchange will help us meet these objectives, including by potentially making our stock eligible for future inclusion in a stock market index. If included in an index, we would anticipate greater demand for our stock, higher trading volume and increased ability to enhance value for shareholders.”

The bank has eight branches across Virginia and Washington DC, and one loan production office in Arlington, Virginia.

John Marshall’s total assets hit $2 billion in the first quarter of 2021, according to its latest results statement published April 21. The bank has reported record earnings for nine consecutive quarters.

The American Bankers Association (ABA) runs a specialist bank index in association with Nasdaq. The ABA Nasdaq Community Bank index has 309 constituents after three were added in December 2020. Over the course of 2021 so far the index has risen by 23.2%.