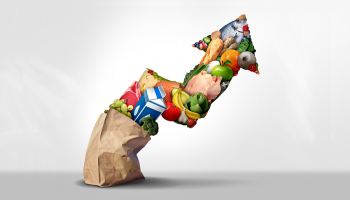 The current elevated level of inflation, which was initially considered transitory, could take longer to subside than previously assessed, according to Federal Open Market Committee members.

In minutes from the groups’ November 2-3 meeting released last week, members remarked that there are no upside risks to inflation, including those associated with strong demand for goods and a tight labor market.

The near-term outlook for inflation was revised upwards, as consumer food and energy prices have risen faster than expected and production bottlenecks and recent wage gains put greater upward pressure on prices than had been expected.

Participants said they continue to anticipate that the inflation rate will diminish significantly in 2022 as supply and demand imbalances but added that uncertainty regarding this assessment has increase.

Some members also expressed concern that an upsurge in Covid-19 cases during the coming winter or an emergence of new virus strains would damp economic activity and intensify price pressures.

In August, US bankers expressed their fears surrounding inflation. Over 50% of bankers said they were positive about future economic conditions in the US — but many were increasingly concerned about the impact of higher inflation.

According to the IntraFri Network survey, 71% of CEOs, presidents and chief financial officers from 473 banks across the US improved their economic conditions and more than half of them expected further improvements during the upcoming year.

Of the surveyed bankers, 41% said that the recent spikes in certain sectors show that inflation could be a real concern in the future.

Consumer prices rose 5.4% in July from a year earlier, according to the most recent data from the Department of Labour — the same level as June and the highest year-on-year increase since 2008.

According to Brookings, the annual rate of inflation from October 2020 to October 2021 was 6.2%, as measured by the consumer price index.