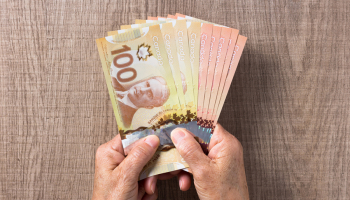 Canadians are more likely to address financial hardships by taking out another loan from the bank, borrow from friends and family, or by selling investments, than they are to tackle debt “once and for all”, according to a new study by Bromwich+Smith (B&S).

In a recent survey gathering data from 1,519 Canadians on their financial priorities, B&S found 39% would take out a new line of credit from a bank or other financial institution, while 33% said they would sell their investments.

Meanwhile, 27% revealed they would borrow from a relative or friend, and just 11% said they would consult with a debt professional.

“The results of the survey paint a picture of people’s financial fears and priorities,” said Laurie Campbell, director of client financial wellness at B&S.

“When it comes to addressing financial challenges – you can raise the bridge or lower the water. Faced with this conundrum it seems Canadians dealing with debt are focused on changing the address of their creditor rather than reducing their debt. This is not always the best option.”

On March 2, The Bank of Canada raised its key rate of interest for the first time in four years, to 0.5%, to control inflation.

Another survey released in January by Canadian accounting firm MNP, revealed 45% of Canadians were not confident they could cover their living expenses in 2022, and 40% said they were concerned about their current debt levels.

In September, Canadian prime minister Justin Trudeau announced plans to tax the country’s banks a further $8.6 billion, raising the corporate tax rate for banks from 15% to 18%.

Reports from Bloomberg at the time revealed the tax would generate an extra CA$10.8 billion, including CA$5.5 billion from a “Canada Recovery Dividend” tax.