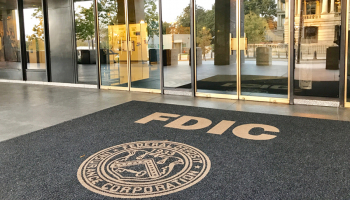 The banking industry was strong enough to withstand a $17 billion or 22% decline in income over the first quarter but “significant uncertainty” remains, according to the Federal Deposit Insurance Corporation (FDIC).

In the FDIC’s most recent quarterly report, combined net income across all federally insured banks fell to $59.7 billion for the first quarter.

This decline was broad-based, with over 62% of banks reporting annual declines in quarterly net income.

More banks put capital aside to protect against potential loan losses, with $19.7 billion more being allocated for provision expenses compared to the first quarter of 2021.

Despite this, net interest margin numbers remained stable as banks are largely well-capitalized to cope with such losses, the FDIC found.

The net interest margin declined by one basis point from the previous quarter to 2.54%. This was four basis points higher than the record low set in the second quarter of 2021, but two basis points lower than the level recorded a year ago.

Banks have also been supported by a continued improvement in credit quality. Loans that were 90 days or more past due fell by 4.5% in the quarter, the equivalent of $4.5 billion.

In a speech accompanying the data release, Martin Gruenberg, acting chairman of the FDIC, applauded the sector for improving practices and being able to withstand challenges but still warned about upcoming uncertainty.

“These factors could impact bank profitability, credit quality, and loan growth and will be matters of ongoing supervisory attention by the FDIC over the coming year.”