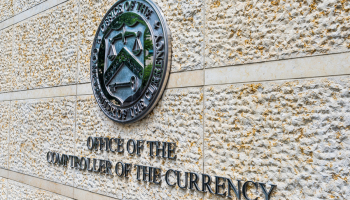 The Office of the Comptroller of the Currency (OCC) has announced several changes to its senior leadership team, with three staff set to depart — two permanently and one temporarily.

Blake Paulson, senior deputy comptroller for supervision risk and analysis, is set to retire from the OCC in August after serving more than 35 years at the federal regulator.

While serving in his current role, Paulson took on a number of responsibilities including chief operating officer, senior deputy comptroller for Midsize and Community Bank Supervision, and deputy comptroller of the central district.

He currently serves as deputy comptroller for the OCC’s Systemic Risk Identification Support and Specialty Supervision (SyRIS) department, which he has led since its creation in 2019. The department provides executive direction and sets goals for nationally chartered trust banks and non-bank service providers.

Gallagher will take on his new role from 1 July, and will lead the agency’s economics, supervision system and analytical support, and SyRIS units.

Meanwhile, Kathy Murphy, senior deputy comptroller for management and the OCC’s chief financial officer, will spend up to one year in the OCC’s new sabbatical program for “executives who have demonstrated exceptional leadership and service to the agency”.

Peggy Sherry, who is Murphy’s deputy in both positions, has been named acting senior deputy comptroller for management and chief financial officer.

Acting comptroller Michael Hsu said the OCC had “benefitted from the strong leadership” of the three departing members, and acknowledged their “passion, drive and professionalism”.

He added: “I am confident that the OCC will be well-served by our new acting senior deputy comptrollers who will provide valuable and seamless leadership while we execute our important mission.”