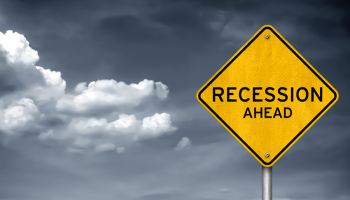 Over 95% of community bank leaders, with up to $10bn in assets, expect a recession to hit within the next 18 months, according to IntraFi.

Although the chair of the Federal Reserve recently stated that a recession is not inevitable, almost half of the respondents of the fintech’s Q2 Bank Executive Business Outlook Survey said if a recession occurs, the primary fault will lie with the central bank.

This is because the Fed has been “raising rates too high and too quickly since the beginning of this year”.

During the course of 2022, the Fed has raised interest rates three times, including a 75-basis-point hike in June, the largest since 1994.

According to Mark Jacobsen, CEO and co-founder of IntraFi, bankers have become less confident in the Fed's ability to curb inflation while guiding the economy to a soft landing.

Jacobsen commented: "To a degree greater than reflected in the equity markets today, most banks do not believe the Fed can constrain inflation without triggering a recession."

While 51% of respondents said the primary reason for a recession would be the Fed's overcorrection, 25% said it would happen due to ongoing supply chain problems.

Bankers are facing other challenges too, and of those surveyed, 54% saw an increase in funding costs over the last 12 months, which marks a 49-point jump from Q2 2021.

Amid the increase in the Federal Funds Rate, 90% of bank respondents expect funding costs to rise over the next 12 months representing a 65-point increase from this time last year.

Survey respondents consisted of bank CEOs, presidents, COOs, and CFOs from 388 unique institutions nationwide. The survey was conducted over the course of two weeks from June 21 to June 30.