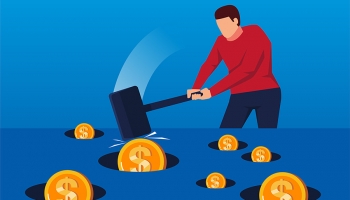 Compliance officers everywhere are likely aware that overdrafts have been a hot topic for decades. On the litigation front, for financial institutions battling overdraft lawsuits, it’s been like playing a game of whack-a-mole. Solve for one claim and another legal theory pops up somewhere else.

On the regulatory front, the banking agencies have been continuously addressing the topic, too. This article will discuss decades-long trends in overdraft litigation, regulatory activity, and suggest some possible actions for financial institutions that are looking to respond to the most recent trends.

It was partly in response to these early overdraft-related lawsuits, and the publicity they generated, that four agencies joined together to release the “Joint Guidance on Overdraft Protection Programs” in 2005.[2] In this guidance, they covered many best practices that are still relevant today. For example, the guidance notes that institutions must consider concerns relating to unfair or deceptive acts or practices when advertising overdraft protection services, and also reminds financial institutions of the need to comply with the requirements of the Truth in Savings Act and the Electronic Funds Transfer Act.

On November 17, 2009, the Federal Reserve Board published a final rule amending Regulation E. Today, the rule is generally known as the Reg E overdraft opt-in rule.[3] The rule became effective July 1, 2010. Since then, the Dodd Frank Act transferred rulemaking authority of Reg E to the Consumer Financial Protection Bureau (CFPB), and while Reg E has undergone some changes under the CFPB’s jurisdiction, the overdraft opt-in rule has not.

To facilitate the opt-in process, the Fed developed a consumer-tested model Opt-in Notice (Model A-9) (though a financial institution could use their own).[4] The rule and commentary required the notice to be given as a standalone form, provided a “safe harbor” for using the model, and implemented strict restrictions against making modifications to the model form. Recently, several court cases are causing financial institutions to rethink how the model form gets used. More on that in a bit.

For anyone who has stayed current on the subject of overdrafts, they already know that, under the current administration, financial institution overdraft practices have been under the microscope. Several agencies have expressed “concern” that financial institutions are “deeply dependent” on overdraft fees. They have also been investigating the impact that overdraft practices have on consumers. That does not mean the various banking agencies are planning any new overdraft rulemaking. In fact, that doesn’t appear to be the case at all, as overdrafts have not made the CFPB’s Regulatory Agenda since a pre-rule item was moved to an inactive status in 2018.[5]

Instead, the CFPB has indicated throughout this past year that they are looking closely at overdraft and NSF practices as part of their supervisory and enforcement efforts. In December 2021, the CFPB released research on Overdraft and NSF fees demonstrating financial institutions’ dependence on such fees.[6] As part of their report, the CFPB warned that any financial institutions (or individuals) engaged in illegal overdraft practices would be subject to enforcement action.

In June 2022, the CFPB reported that, since the beginning of the year, it had been piloting a supervision effort to collect information from 20 supervised institutions on their overdraft and NSF practices.[7] The CFPB indicated they intended to use this information to identify institutions for further examination and would share the information with other regulators.

The CFPB is not the only agency scrutinizing overdrafts. The OCC’s Michael Hsu has given several addresses during his tenure indicating his agency is looking at overdraft fees and encouraging financial institutions to adopt more consumer-friendly practices.[8] In addition, the topic of overdrafts has repeatedly appeared front and center in agency bulletins. Some of which will be discussed below.

It is also worth noting that not only are the agencies revisiting overdraft practices, but Congressional interest in the topic appears to have picked up. While it appears unlikely that any bills will be passed by both houses of Congress, there have been several high-profile hearings in the past year.[9]

And while agency scrutiny and Congressional hearings suggest future changes might be coming to overdraft practices, the biggest current impact on practices and documentation continues to come from lawsuits.

One of the primary trends in overdraft litigation is typically called the “Authorized Positive, Settle Negative” theory, or APSN. An example of an APSN transaction is where a debit card transaction is initially authorized against an amount available in the account. But then, prior to settlement, an intervening transaction creates a situation where there is not enough money to cover the initial transaction. Consequently, the financial institution charges an overdraft fee.

The legal cases typically argue that the account agreements promised the financial institution would set aside funds in accounts at the time of authorization to cover payments for the authorized transactions and position the claim as either a breach of contract or a violation of unfair, deceptive, or abusive act or practice.[10]

Various agencies have weighed in on this practice and most assert the practice should be avoided. Of interest, the agency analysis seems to have evolved from calling APSN “deceptive” or “unfair” to simply labelling it as “unfair.”

For example, in 2015, the CFPB’s Winter Supervisory Highlights noted that consumers could not have anticipated this practice since it was not properly disclosed. [11] This suggests the CFPB viewed the practice as “deceptive.” However, Interagency Guidance from 2016 includes a slide describing APSN as an “unfair practice”.[12] This summer, the New York Department of Financial Services also labelled APSN an “unfair.”[13]

The significant difference between unfair and deceptive is that an institution cannot disclose its way out of an unfair practice. Instead, the practice should just be avoided.

Another trend in litigation is the argument that the financial institution has not adequately disclosed that it is using the “available” balance instead of the “ledger” (or “actual”) balance. The argument typically goes that, because the financial institution did not adequately define “available” balance, the consumer could not determine if they had enough money in their account to cover a transaction and therefore would not know when a fee would be assessed. In Tims v. LGE Community Credit Union,[14] for example, the court, addressing a breach of contract claim, determined that, in viewing the Model A-9 form alongside the other account documentation, the definition of “available balance” had not been adequately disclosed.

It should be noted that the terms “available balance” or “ledger balance” are not defined in any regulations either. In cases, courts have defined the “ledger balance” as the “actual amount of money in an accountholder’s account at any particular time.” The “available balance”, in contrast, is “the actual amount of money in the account minus any ‘holds’ on deposits and pending debits that have not yet been posted.”[15] But without a regulatory definition, institutions are really left to define this on their own.

The litigation over “available” vs “ledger” balance is often paired with the theory that the language in the Model A-9 form is not sufficient.

In such cases as Adams[16] and Grenier,[17] the courts, addressing the Reg E violation claim, focused solely on the Model A-9 form, and did not consider the language in the context of the account agreement or other documentation, since Reg E requires the disclosure to be “segregated” from all other information. The model form simply says “An overdraft occurs when you do not have enough money in your account to cover a transaction” but does not describe what “enough money” means. Therefore, the plaintiffs argue they cannot determine when their account will be charged an overdraft.

Financial institutions usually counter that a specific definition of “available” is not necessary because Reg E offers a safe harbor for using the model. They also point out the regulatory restrictions on making any changes to the Model A-9 form. But courts have routinely rejected this defense and found the financial institutions’ disclosure to be inadequate, suggesting that if the language of the model form does not accurately and completely describe an institution’s practice, then it is inadequate.

The CFPB, for its part, has yet to provide any guidance on this particular issue.

The last litigation trend this article will address is the “re-presentment” situation,[18] which is really a nonsufficient funds dispute — not an overdraft dispute. In this scenario, the merchant submits a request for payment, which is denied due to insufficient funds. A fee is assessed. Sometime later, the merchant submits another request for payment — that is, they re-present the item for payment. If there are still insufficient funds, the payment is again denied, and another NSF fee is assessed. Of course, this can recur multiple times.

Thus, a customer might be assessed multiple NSF fees for what, in their view, is the same transaction.

And that really is the center of the dispute. The consumer argues that this was a single transaction, and should be assessed one fee at most. From the institution’s perspective, each time the request for payment is submitted, that is a unique transaction. And so a fee can be assessed for each transaction.

The lawsuits center around whether the practice has been disclosed, suggesting that the practice is deceptive. Of great interest, however, are statements from the FDIC in March[19] and in August[20] of this year and from the New York Department of Financial Services in June of this year.[21] While both call the practice deceptive and note the need for adequate disclosure, both agencies have also indicated that in some circumstances the practice might be considered unfair. As a result, there may be a need to avoid the practice altogether or, alternatively, to modify the practice to avoid the portion that is unfair. According to the FDIC, to avoid the practice being considered unfair, institutions need to provide meaningful notice at the time an NSF fee is assessed as well as adequate time for the consumer to bring the account balance current before assessing any further fees.

The FDIC August 2022 Supervisory Guidance on this topic also provides financial institutions with some important information. Specifically, the FDIC provides guidance for financial institutions that self-identify and fully correct violations, including the potential of limiting the lookback period to two years from the date of the letter.[22]

In July 2022, the New York State Department of Financial Services identified “double fees” on a “futile” overdraft transfer as another practice financial institutions should avoid.[23] According to the NYDFS, an unfair act or practice occurs when a consumer is charged both an overdraft fee and a transfer fee on a transfer from a linked account where the linked account does not have enough money available to cover the overdraft.

Maybe the most interesting dilemma is addressing the cases around the use of the Model Reg E Opt-In notice and how to balance the Reg E restrictions on making modifications to the model form against the court cases saying institutions need to amend the form to accurately describe their practices. To do this, institutions should work with legal counsel to determine the best approach for their institution. Factors to consider include:

In conclusion, all the activity in this area indicates that overdraft litigation and scrutiny is not going away any time soon. And that makes it important for financial institutions to stay current and responsive to what is happening with litigation as well as agency and Congressional activity.