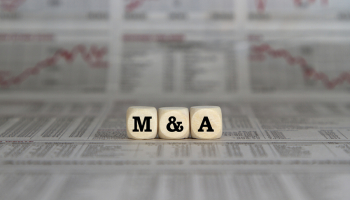 Banks should be exploring merger and acquisition (M&A) opportunities despite recent economic headwinds, according to a new report from McKinsey.

The consultancy giant said transactions made during “uncertain times” have historically been “much more likely to deliver strong total shareholder returns” than deals made during “bullish periods”.

Despite a fairly strong period for M&A deals this year, the total volume of activity is down by 37% for the first nine months of 2022 compared to the same period last year, the consultancy said.

Now could be the time to invest for some US banks, McKinsey’s Clara Aldea Gil de Gomez, Robert Byrne, Sean O’Connell, and Igor Yasenovets wrote in a recent article for the consultancy’s website.

“First, there are usually more assets available to choose from during downturns, and valuations tend to be lower, giving more headroom for positive returns,” they wrote.

“Second, in times of uncertainty, absent regulatory interventions to ‘save’ an institution, nearly all potential deals face a significantly higher level of internal scrutiny, so those that get approved and executed often boast an extra strong business rationale.”

The value of M&A deals in the US banking sector collapsed after the 2007-09 banking crisis and only began to pick up again in 2019.

However, in a separate report, Minneapolis-based consultancy The ROIG Group warned that just 11% of US banks were “well positioned to adopt growth strategies” such as acquisitions.

An analysis of 397 publicly traded US banks found that 56% were “profitable today but the market believes they will be worth materially less in the future”, according to The ROIG Group. Banks in this group needed to focus on improving their customers’ experience while also optimizing expenditure through streamlining their operations.

A further 33% of the banks The ROIG Group surveyed were designated as “revive”, meaning profits were failing to keep pace with cost of equity and customer relationships were “fractured”.

“Revive banks must prioritize their efforts on fixing what is broken, pruning non-customer-facing expenses and underperforming assets, and improve the earning asset mix,” the consultancy stated. “CEOs must be prepared to place large bets to turn the company around.”