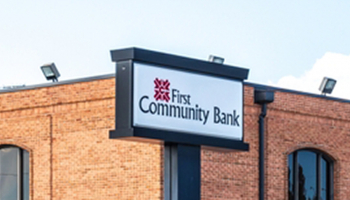 Virginia-based First Community Bankshares is to acquire Surrey Bancorp in a deal worth approximately $113 million.

Late last week the $3.1 billion banking group announced the planned acquisition, which it said would add approximately $500 million in assets to its balance sheet. Surrey has seven locations in North Carolina and Virginia.

Following completion of the transaction — expected to be in the second quarter of next year — subsidiaries First Community Bank and Surrey Bank & Trust will merge, with the former the surviving entity.

Surrey’s CEO Edward Ashby III said: “When considering a long-term partner, we wanted a bank that shared our values of providing the highest level of banking services to our community, valued its employees and performed at a level worthy of its shareholders. In First Community, we found all those qualities and are confident that our combined franchise will continue to generate value for all our stakeholders.”

William Stafford II, chairman and CEO of First Community, added that the combination would boost his bank’s customers’ access to expertise in government guarantee lending, while Surrey customers would benefit from additional scale, products, and technology.

Surrey’s Ashby and another board director will join First Community Bank’s board, and other “key executives and employees” will also make the transition to the combined company, according to the statement.

Earlier this month, Washington Federal announced its planned acquisition of Luther Burbank Corporation for approximately $654 million. The deal will create a banking group with $29 billion in combined assets when it completes in the second quarter of 2023.

Meanwhile, Webster Financial Corporation subsidiary HAS Bank has acquired 4,800 health savings accounts from Inland Bank and Trust, with an estimated $15.5 million in deposits between them.

Finally, Illinois-headquartered Wintrust Financial Corporation’s asset management subsidiary Great Lakes Advisors has agreed to acquire two investment businesses from Rothschild & Co North America. In total, it will see the transfer of approximately $8 billion in assets, according to a statement.