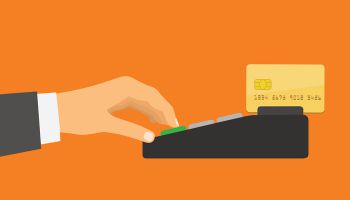 You just know that a new payments technology is starting to gain traction when not only your big-box Target store requires you to dip your chip card instead of swiping it, but your local liquor store does as well.

At least anecdotally, it seems that more and more merchants either have the EMV point-of-sale machines in operation, or at least have a sign on them saying they’ll be operational soon.

It begs the question—now that chip cards and chip readers have hit the stores, all in the original name of avoiding card-present fraud liability, how will EMV—The Next Generation play out? That is, what’s the payback—beyond mitigating the fraud risk—after going through all the expense, certifications, and customer education that’s been involved in transitioning to this new state of payments affairs?

To answer that question, other questions need answering. Is it really true that EMV POS availability is growing? What’s being done to speed up its adoption? What effect is it having on deterring fraud?

And finally, back to the original question: What’s next?

These statistics on merchants jibe with an observation by Ed McKinley, writing in Transaction Trends, the official publication of the Electronic Transactions Association. "Most of the merchants in the middle—think of regional supermarket chains or pizza parlors with five locations scattered around town—have neither the resources of the big players nor the simplicity of the small players. As a result, medium-sized players have been caught unprepared for chip cards,” he says.

Notably, McKinley adds: “[These medium-sized players] haven’t been able to integrate transactions with their loyalty programs, inventory control, payroll, and employee scheduling.” More on this in a bit.

In a report issued in July, Mercator Advisory Group predicts the EMV percentage of total card-present credit volume to go from 43% this year to 100% by 2021.

“Consumers have grown much more comfortable with chip cards over the last 12 months,” says Alex Johnson, director of Mercator Advisory Group’s Credit Advisory Service. “This has thrown the ongoing challenges in activating merchant POS terminals into sharper relief. How merchants, acquirers, and the card networks resolve these challenges will shape the next 12 months of the U.S. EMV migration.”

Adoption—In May, MasterCard reported that chip-active merchant locations increased to 1.4 million as of the end of April. Visa issued a similar estimate in June, adding that an average of 23,000 new merchant locations become chip-enabled each week.

However, both MasterCard and Visa subsequently announced plans and policies designed to speed up the certification process that had produced bottlenecks to EMV adoption. Generally speaking, these provide streamlined testing requirements for acquirers and value-added resellers, as well as additional resources to speed things up. Visa estimates that the new processes could reduce subsequent testing by acquirers by up to 80%.

“Visa recognizes the importance of having the industry help merchants get their chip terminal solutions up and running quickly so that everyone, especially consumers, can benefit from the powerful security protection of chip technology,” says Oliver Jenkyn, group executive, North America, Visa.

Fraud—MasterCard estimates that counterfeit fraud at EMV-equipped merchants decreased by 27% in terms of their overall U.S. dollar volume in January 2016, as compared with January 2015. To put this in perspective, though, Aite Group, in its own study, finds that counterfeit card fraud accounts for 45% of fraud, while allowing that the EMV chip is very effective against this type of fraud.

However, the perspective from issuers paints a different picture. According to a widely-cited study by Lexis Nexis, issuers directly lose $10.9 billion to card fraud each year, driven mainly by credit cards.

Here’s part of the study’s key findings: “Issuers’ opinions are mixed about some aspects of the effect that EMV will have on fraud. The majority of issuers agree that EMV will result in increased card-not-present fraud losses, while driving a reduction in fraud at the point of sale. Despite the EMV rollout, counterfeit card fraud is the fraud type issuers believe is most likely to increase as criminals rush to misuse magnetic-stripe cards before that opportunity ends.”

Looking ahead, according to the report: “Significant investment in fraud mitigation is planned for 2016.” Specifically, 78% say they’ll invest in additional tools such as dynamic and static knowledge-based authentication methods.

One could conclude from this that the chip card adoption road will be bumpy in the near-term, at least until the last of the mag cards go away. A side issue that has risen, still to be resolved, is the current requirement in the United States for chip-and-signature cards, versus chip-and-PIN cards used in other countries, and which merchants generally favor.

Aite Group looked into this recently, exploring the relative costs for installing chip-and-PIN systems and the estimated fraud costs that would deter. Taking lots of factors into consideration, Aite concluded that issuer costs to switch to a chip-and-PIN system would reach more than $2.6 billion, which would result in a five-year fraud-avoidance benefit of about $850 million.

“With very little incremental risk for merchants and significant expense and implementation challenge for the payment ecosystem, it is difficult to justify a mandate to implement PIN as a credit card verification method,” says Thad Peterson, senior analyst, Aite.

So what will it all mean after the fraud liability issue is settled?

As ETA’s McKinley hinted earlier, many merchants, and presumably everybody else in the payments ecosystem, are starting to speculate about how to build on the chip-and-dip possibilities. Remember? McKinley mentioned integrating transactions with loyalty programs, inventory control, payroll, and employee scheduling.

Technavio certainly has given this a lot of thought and came up with a report specifying three trends for the EMV POS terminal market through 2020. In short, they are:

•          A shift toward cloud-based solutions. “Several large retailers and small and medium-sized enterprises in the United States are expected to migrate to software-as-a-service in the cloud from back-end processes,” the report says. For example, “First Data Clover Station is a cloud-based POS solution (in which EMV POS terminal is integrated), which delivers benefits such as inventory management, secure transactions, and increased customer loyalty.”

•          Big data management. “Large amounts of data and its functioning will require highly compatible POS solutions that will work efficiently with the information present in the cloud, such as demographics, payment preferences, and customer buying behavior, to fuel market analytics (pre-marketing and post-sales marketing.)” This, it says, would encourage more customer visits to stores by providing loyalty points, self-checkout systems, and new mechanisms such as visual identification along with voice recognition and biometrics.

In short, and in other words, just as new technologies are converging throughout the financial services industry—big data, analytics, information management (and not to mention mobile, online, and self-service), futurists add EMV into this incredibly dynamic mix.

EMV: Where the  Merchants Are

Tagged under Blogs, Making Sense of it All, Cards, Payments, Feature, Feature3,

More in this category: « Can banks deliver “Simulchannel”? Contactless payments—old could be new again »
back to top