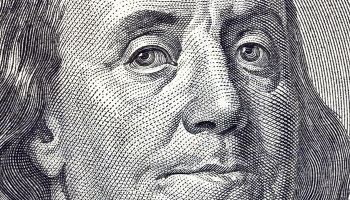 Throughout history, as counterfeiters have become more sophisticated in creating fake currency, so have the measures taken by countries, including the United States, create more sophisticated, harder-to-duplicate currency designs. From the time the Continental Congress adopted the dollar as the unit for national currency in 1785, to 1863 when the Treasury seal was first used along with red and blue fiber-embedded paper, to current redesign formulations, the push to outpace counterfeiters goes hand in hand with the history of money in the United States.

The latest currency redesigns—In 1996, the U.S. government undertook a major anti-counterfeiting initiative: the first complete redesign of paper money since 1928. It started with the redesigned $20 bill which entered circulation in 2003, followed by the $50, $10, and $5 notes in successive years.

The latest change to impact U.S. currency involves a redesigned $100 bill, which will be introduced Oct. 8. The bill will include two new security features: a 3-D security ribbon and “bell in inkwell” image. The security ribbon, which is woven into the paper, reveals images of bells and the number 100; these move back and forth and side to side as the bill is handled. The “bell in inkwell” feature relies on the effect of change, only here the bell printed on the paper changes color from copper to green within a copper-colored inkwell. The net effect of these two innovations is that counterfeit versions will be even harder to create.

The redesigned $100 bill will also retain some existing, and highly effective, security features from previous iterations, as well as a few other new features. For example, if you hold the bill up to the light, a faint watermark image of Benjamin Franklin can be seen next to his portrait, from both front and back. Additionally, raised printing, microprinting, the addition of new symbols of freedom, and the printing of a gold 100 on the back of the note all contribute to making this new $100 bill the most secure to date, and are all things banks, businesses, and consumers should be on the lookout for to help spot fake currency in circulation.

Beyond our borders:Canada—In an effort to deter forgeries in their country, Canada’s recent redesign of four of their bills gives new meaning to the idea of paper or plastic. In Canada’s case, the answer is plastic. Beginning with their $100 bill, followed by their $50 bill, their $20 bill, and, most recently, their $5 bill, Canada has chosen the route of selecting a new substrate on which to create these bills. Instead of the traditional paper-cotton material, the $100, $50, $20, and $5 bills have been replaced with polymer. This makes the currency both harder to destroy (being considerably more durable than paper) and tougher to counterfeit.

However, while Canada’s new monetary material may differ greatly from bills in the United States, they also use additional security measures which are similar those found in the States. For instance, one of the images on their new $100 will appear as a holographic likeness in a clear plastic window that changes colors as you hold the bill at different angles. In addition, they are using raised ink, transparent text, and hidden numbers as a means to raise the level of difficulty in copying their notes, as well.

Tips for spotting counterfeit bills—Whether you’re dealing with newly redesigned bills, or versions of bills that have been in circulation for a time, pay close attention to the following features to spot the real deal from a copy:

The bottom line—As long as there is currency being circulated, there will be counterfeiters trying to emulate that currency. The latest redesign measures taken by countries like the United States aim to thwart counterfeiters in their quest to forge bills, yet these cannot be the only measures taken. A currency counting machine with the ability to detect forgeries is essential for an operation that handles cash on a daily basis. Having the right technology on hand can ensure that no counterfeit currency is infiltrating a cash room and being redistributed to customers.