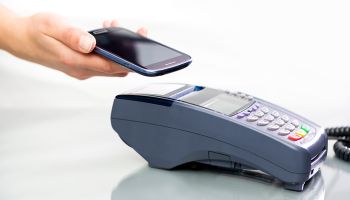 Cash, checks, plastic—they are all so yesterday.

Or at least this morning.*

The entire process of paying for things is rapidly changing. In the near future, people will be as comfortable paying for their groceries or bar bills through a simple wave of their smartphones, wrist watches, or—who knows? Rattling their pearl necklaces?—as they are now with things they actually have to handle.

Okay, that all may not happen this afternoon, but soon, and for the rest of our lives (apologies to “Casablanca”).

The question is, where do banks fit in? Or retailers? Or so-called fintech upstarts seeking to disrupt everybody else?

The answer seems to be: It’s all up for grabs.

The payments territory is like the Wild West, with everybody scrambling for territory.

Celent, in a report issued in November, uses a different but similar metaphor to describe the payments revolution situation:

“Pent-up demand for modernization has built to the point where the dam holding back change is under enormous pressure. New entrants and new ways to pay have moved payments from being a dull (but necessary) backwater to a space that has more startups and more investment than almost all other areas of banking put together,” says Gareth Lodge, senior analyst, Celent.

“Ultimately,” Lodge continues, “because banks have the most to change, the financial institutions able to adapt most quickly and completely will be those that reap the greatest rewards. However, as the payment dam bursts, every player in the payments ecosystem will need a set of robust strategies and partners to navigate the ensuing rapids.”

Evidence that there are new ways to pay, and that people are apt to embrace these new methods, is starting to emerge.

Diebold, for example, just announced a concept for contactless self-checkout for the retail market. It explains it this way: “The new concept combines the core capabilities of the automated teller machine with the convenience of contactless mobile payments and self-checkout.”

Consumers will scan items they want to purchase while shopping in-store via their mobile device. Once a consumer is ready to pay, he or she taps the phone at the self-checkout unit to pay for the items when exiting. Payment is made through preloaded card information found in the consumer’s mobile wallet, or through cash inserted into the terminal. Consumers also would be able get cash back at the same terminal in much the same way as at an ATM.

Another example: MasterCard recently announced a partnership with Coin, a financial hardware and software startup based in Silicon Valley. The two in turn have set up relationships with fitness wearables companies Atlas Wearables, Moov, and Omate. Through this arrangement, not only will these companies’ products track the wearers’ fitness, but also will let the wearers make payments through near-field communication. Other applications may soon follow.

Consumers are playing along

Other evidence indicates that consumers actually are responding to new payments systems. Verizon Wireless commissioned a survey by KRC Research that found a majority (56%) of smartphone owners purchased a product using an app in 2015. Furthermore, the survey showed that 23% of smartphone owners took this step for the first time last year.

What did they buy? Taxi or car rides (think Uberization), airline flights, and restaurants topped the list. (By the way, the Verizon survey found that 55% of all smartphone owners made a mobile banking transaction using an app. Just saying.)

So, again, we’re back to facing the Wild West, or at least a groaning dam.

Celent recently released three new reports, each examining the payments situation from the perspective of the main players—banks, retailers, and fintechs.

“It is time to reimagine the payments relationships between banks, retailers, and fintech, Combative stances and door slamming will only result in lost opportunities for all,” say Gareth Lodge and Zilvinas Bareisis, another Celent senior analyst, in these reports.

In brief, what they have to say:

• Banks—“The disruption in payments is real; however, the disintermediation effect to date has largely been contained. However, banks certainly cannot afford to be complacent. Changes sweeping the industry suggest that there is a lot more disruption ahead with much more significant impact on banks.”

• Retailers—“Given the pressure that banks are feeling, it would seem at first glance that banks need retailers more than retailers need banks. However, while retailers focus on managing their supply chain, banks play a vital role in the financial supply chain for a retailer, including regulated activities a fintech simply can’t supply.”

• Fintech—“Fintech players are attracted to payments for a variety of reasons such as revenue, transaction data, and the opportunity to provide a range of services to merchants. However, confrontation is not always the best strategy. The fintech community increasingly appreciates that banks still have a lot to offer.”

How far will this go, near term?

Aite Group seeks to put some numbers around this Wild West scenario, just as speculators in the 1840s sought to value the gold in them thar hills.

The firm forecasts that, when combined with ecommerce growth, global online volume will reach nearly $6 trillion by 2020, with about 28% of that volume generated by mobile online transaction.

That’s a lot of gold.

Aite observes the situation this way: “Right now, mobile online payments are at the cusp of a growth curve that could eventually subsume any other payment path, but the complexity in this space obscures the way forward.”

Says Thad Peterson, Aite Group Retail Banking and Payments senior analyst: “There has never been a convergence of technology, economics, and demographics like this one. It’s going to be chaotic, with plenty of misdirection and mistakes. The only thing certain is that mobile online payments will change commerce for good.”

* Of course there is also last week’s article about the continuing preference, in some circumstances, for good old-fashioned folding money. Read “Cash remains ‘royal’ for some payments”

More in this category: « What goes around, comes around Cybercrime battle means all hands on deck »
back to top