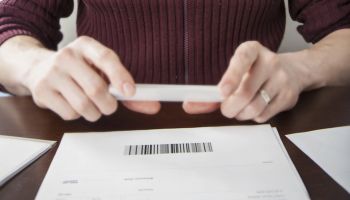 Its main findings include:

• Debit card “armor.” On average end-users turned on and off their debit cards 130% more frequently in January 2015 than in January 2014. This feature allows an end user to manage fraud risk around their debit card by leaving the card off and then turning it on when they need it. This increase could possibly be tied to the increased amount of large debit card breaches seen in 2014.

• “Shoot and pay.” The average end-user taking pictures of bills made more such payments in 2014. In addition, the average number of payments per month each end-user makes has increased by 18%.

Meanwhile, the average value of the payments is consistent at $235 per payment. However, the average monthly number is even higher on iPad, having increased over the year by almost 75%. In addition, iPad end-users make more payments than their smartphone counterparts. Clearly, there is a trend where end-users like the bigger “form factor” of a tablet for payments.

• More money moved between accounts. The average value of an internal account transfer has increased substantially in 2014 from an average of $393 in January 2014 to $475 in January 2015. The number of transfers each end-user makes has stayed very consistent at 3.3 transfers per month.

• Best in class bests the next best. The average mobile channel end-user growth for a financial institution in production for at least one year is 35%. However, the best in class bank or credit union grew their user base by over 60% in 2014.

Clearly there is substantial organic end-user growth occurring in the mobile channel. This is being driven by the popularity of smartphones and by financial institutions deploying innovative marketing campaigns for the mobile channel from grass-roots email campaigns to more fancy TV ads.

• Banking pointedly rises pointedly. Using your finger to swipe and navigate around a smartphone or tablet has increased by 125% year over year. This is an interesting data point as end-users might not be aware they can swipe a finger to navigate. Over time, they learn this is an option and clearly they like it.