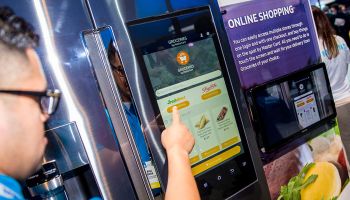 Groceries by MasterCard was unveiled by the payments company during the recent CES—fomerly known as the Consumer Electronics Show. Owners of Samsung's new Family Hub refrigerator will be able to order and pay for groceries from the factory-installed app.

The other night my younger daughter went into the kitchen freezer for ice cream. She filled a small dish with vanilla, and put the box back. Other than a twinge of jealousy—I can’t eat ice cream—I didn’t think much further. That is, not until she returned two minutes later, opened the freezer, and shot a picture of the ice cream box, closed the door, and headed back to her room.

Dad: Dear, can you come back here for minute?

Dad: Why are you photographing your dessert?

[My family does a lot of strange things with smart phone cameras, involving dogs, costumes, and more.]

Daughter: I was shooting the bar code, so I can upload the dessert to my Lose It! app.

Lose It!, I learned, is an app that counts calories, carbs, etc., grabbing much of the data from sources like food bar codes.

It’s kind of funny full circle, because a good 20 years ago, my father had gotten together with a couple of inventors to market their PC software that would allow dieters to figure out much the same kind of information. It was called Nutriplan, and it was ahead of its time and terribly clunky. Using internal tables and such it could do some of what Loseit does.

It also took about 20 minutes per meal, which is part of why it never caught on.

But the operative point is the kitchen refrigerator. A day or two after I learned about Lose It!, stories from the CES (formerly known as the Consumer Electronics Show) began popping up in my inbox, including two “Internet of Things” announcements from MasterCard. One involved a refrigerator and the other involved fitness.

Being a fairly paranoid person, stories by John Ginovsky, our tech correspondent, about the potential exposures of “IoT” have caught my attention—especially one that told the story of an internet-connected refrigerator used as the launching point of a hack. However, I come from an Italian family for which kitchens and food are pretty centric, so “Groceries by MasterCard,” to be launched in mid-2016, caught my eye.

Groceries by MasterCard is a new app that allows consumers to order groceries directly from a screen built into Samsung’s new Family Hub refrigerator, which debuts in May. The app connects the refrigerator to grocers and food delivery services, initially FreshDirect and ShopRite. The family can build grocery lists and fill a virtual shopping cart, and later request that the order be paid for via debit or credit, processed, and delivered. The app includes a four-digit PIN, presumably so younger family members can’t order cases of ice cream on the house. 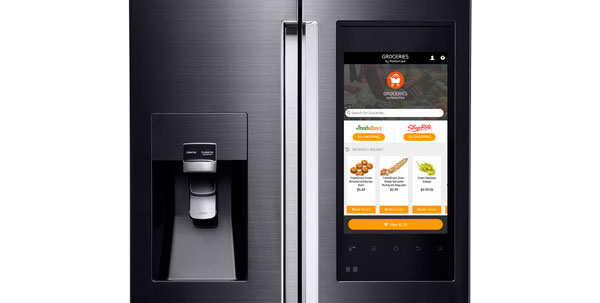 My family shares a shopping list through an app, OurGroceries—except for me. I get paper notes. The app, meant to replace the sticky note on the fridge of weekly wants and needs from the supermarket and the warehouse club, doesn’t play on my Blackberry. Groceries by MasterCard will also permit household members to reach the app’s shopping cart from any other device of their choice. And they’ll be able to scan barcodes with those devices in order to make manual additions to the household shopping cart.

Groceries by MasterCard will come preloaded in Samsung’s fridges. The intent is that once the household has used it for a while, it will, having learned preferences and such, make personalized shopping suggestions. In time, MasterCard says, the app will be upgraded to include recipe and video integration. And the list of participating grocers will be increased via a partnership with MyWebGrocer.

This follows the continuum of digital wallets and other ways of marrying the physical world to the digital world, via shopping and payments. In an interview, Sherri Haymond, senior vice-president, digital payments, at MasterCard says that such functionality may seem on the edge now, but “we think that this is going to become table stakes.” She says that MasterCard projects that by 2020 20%-30% of payments will be digital, whether they enter the system through a refrigerator, a digital wallet, or wearables.

“Most use cases are able to turn into electronic transactions,” says Haymond, adding, having been at CES for a couple of jammed days, that “the pace of change is just crazy right now.”

And the line between shopping, payments, and other functions will continue to blur. The idea of melding budgeting and dietary tracking and such into the Groceries by MasterCard, down the road, seemed to be of interest to Haymond.

APPetite: App it on, app it off

Which brings up the other MasterCard announcement, an expansion of the company’s ability to handle payments via wearable devices. Perhaps coincidentally, on the heels of the Groceries by MasterCard announcement, the company announced a partnership with Coin, a consumer electronics and financial software company, that will enable payments from fitness bands and smart watches. Initially the arrangement with Coin involves devices from Atlas Wearables, Moov, and Omate.

This deal follows on MasterCard’s announcement of its Commerce For Every Device program last October. That was a commitment to develop technology enabling payments to be made via “any consumer gadget, accessory, or wearable.”

So it seems that before too long, via these payments innovations, you’ll be able to “eat and run”—and pay anywhere in between.

From a MasterCard Youtube video about Groceries by MasterCard. Click on the image to view the video. 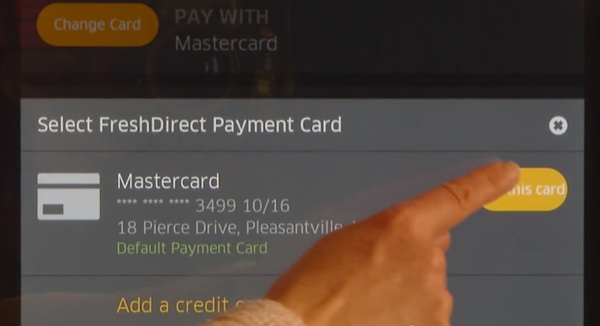 More in this category: « Pounds and pence, as you like it Banking Auf Deutsch »
back to top