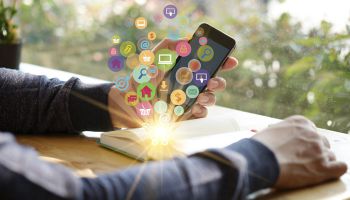 The meaning of "pay by phone" has changed significantly in a couple of decades.

Mike Moeser, by definition, is a payments geek. He’s director of payments at Javelin Advisory Services, and it’s his job to know about, and understand the intricacies of all forms of point of sale payments, from cash to … whatever they invented this morning.

Yet mobile wallets offered by Apple, Android, and Samsung don’t get him terribly excited. He says that none of these providers give consumers much of an incentive to pay with their phones versus a card.

Where he sees much more potential for driving mobile-payments volume is retailer-based mobile wallets. These apps—they are offered by retailers from fast-food outlets to coffee chains to discount stores to shopping malls—offer payments as a supporting player in a broader range of services. And that, says Moeser, makes it worthwhile using one’s phone to pay.

Paying by phone, but with retailer apps

The Javelin 2017-2021 Retail Point of Sale Payment Forecast states that “Retailer-based mobile wallets will fuel the growth of mobile proximity mpayments because they add a critical element to the mPOS [mobile point of sale] value proposition that has been missing: retailer engagement.”

“Some, such as Apple Pay, have experienced strong adoption which might be the result of Apple’s strong brand franchise,” the report states. “Others, such as Samsung Pay, have needed to resort to offering rewards to woo customers.”

But retailer wallets, says Moeser, have a leg-up on wallets that are only for payments. The retail wallets offer multiple services and this underscores that they are part of the retailer’s customer experience and that the retailer owns the customer relationship.

Figures in the report indicate that while it is still early days for all forms of mobile wallets, retailer-branded wallets have a slightly higher rate of adoption (11.96%) over Apple Pay (11.88%) and significantly higher than either Android Pay (7.61%) and Samsung Pay (5.96%).

Role is betwixt and between

On some levels, retailer wallets begin to look like reward credit cards, says Moeser. “It’s a matter of driving more spend onto that wallet,” he says of the competition for volume.

As an example, Moeser points to the Starbucks app.

“For the Starbucks customer, it’s a rite of passage” to sign up for the app, he says.

The free app collects “stars” toward beverage and food rewards; it offers special deals; tracks past orders; enables users to order ahead and pay ahead to skip the often long lines; redeem rewards; manage Starbucks cards … and it also enables users to pay at the point of sale with their phone.

“They allow retailers to do one-on-one marketing,” says Moeser, in a way that puts the message and the calls to action right in the customer’s hands, literally.

Note as well that the app as a marketing platform offers something few other marketing means provide: absolute exclusivity. You won’t find promotions for Dunkin’ Donuts on the Starbucks app, and vice versa.

Rewards and other positive elements of the relationship with the retailer are all causes to open the app, Moeser explains.

Flip side of retailer apps

Where the provider of payments service fits into this picture best awaits discussion of the other side of retailer wallets. While many retailers have them, Moeser believes many won’t succeed. One factor, at least at this point, he says, is that many Americans don’t download apps, even though they own smart phones.

The other downside is this: lack of ubiquity. Cash and cards represent a liquid payments means that is accepted nearly everywhere these days. Retailer wallets are much more specific.

Moeser says he purchased a big screen TV recently and did so with the app of the national electronics chain he was buying it from. He downloaded the app because the store offered a promotional discount for doing so. However, Moeser says he of course doesn’t buy big screen TVs regularly, and he hasn’t had any need to shop at the store since using that introductory discount. So much for his having the app on his phone.

“Consumers are unlikely to have dozens of retailer wallets on their phones,” the report states.

Moeser says this limitation to retailer wallets suggests that banks seeking income from payments work to achieve top-of-wallet status on a selected group of retailer apps that offer high volume. Then the bank must find a combination of incentives that make it worth the consumer’s while to consistently pick their “card” as the preferred payment method on that retailer’s app.

An example from Javelin’s report of such incentives, though not with a retailer wallet, is one offered by JPMorgan Chase. If a Chase Sapphire Reserve cardholders pays in Samsung Pay, they receive an extra bonus point for every $1 spent, up to $1,500 worth.

Interestingly, Moeser says, while retailer wallets might seem like the next generation in “store cards,” the analogy doesn’t stand up too far. And store cards, he notes, have become a smaller and smaller aspect of retail payments. Most programs, where they still exist, are really offered by bank credit card providers, and typically as soon as someone has sufficient satisfactory credit history, they are being offered Mastercard or Visa products that can be used at any merchant.

Today, says Moeser, store cards account for perhaps $1 out of every $20 in retail purchases.