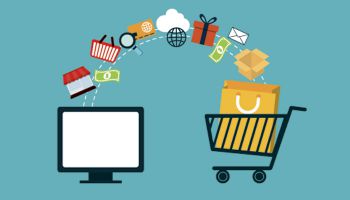 Most people who sell in online marketplaces have a key point in common: "Show me the money!"

Bankers interested in banking the “gig” economy need to know a fundamental—one of the gig world’s challenges is getting paid.

Decades ago, people hosted Tupperware parties or sold home products door-to-door. Today that would be considered part of the “gig economy.” The gig market now, however, is much more diverse and the seller very likely is marketing the results of his or her own labor via the internet. Such goods frequently sell on major, general ecommerce websites as well as smaller, specialized ones. This has become an international phenomenon.

“It’s a huge market, and it’s growing,” says Michael Ting, senior vice-president, digital markets, at Hyperwallet. “Goods” sold may not be physical, necessarily, but can be freelance work of numerous kinds.

“You can sell out of your garage, or you can rent out a room,” Ting explains.

While some very large organizations like Amazon, eBay, and Etsy play a big role in various aspects of the gig market, Ting says it remains a very fragmented economy with more than a dozen new marketplaces popping up daily.

Ting’s present company sets up payment channels for marketplaces and other organizations, but his own previous gig was a stint for Upworks, which claims to be the world’s largest market for linking businesses and freelancers. Ting says the goals of the best marketplaces include making it as quick and easy as possible for a seller to become part of its system; ensuring that transactions are fulfilled, whether they involve goods or services; and making sure that sellers receive promised payments.

“It seems intuitive that speed of payment would be an obvious thing,” says Ting. Yet Hyperwallet’s recent State of Ecommerce Marketing Selling In 2017 indicates that this continues to be a challenge for sellers, and a key factor in which platforms they use for sales—and in their decisions to switch.

Why speed ranks so highly

The survey polled 1,500 ecommerce marketplace sellers based in the U.S. Interestingly, 62% have a separate full-time job, but one in ten say they hope, someday, to make enough money via online selling to permit them to quit their day job. Comparatively few sellers are hobbyists looking for an outlet: While 18% began selling as a result of a “passion project or hobby,” 40% reported that they needed more money to make ends meet, and 42% wanted more money for leisure spending. In fact, over 90% of the sellers surveyed bring in as much as 49% of their total income via selling on ecommerce sites. 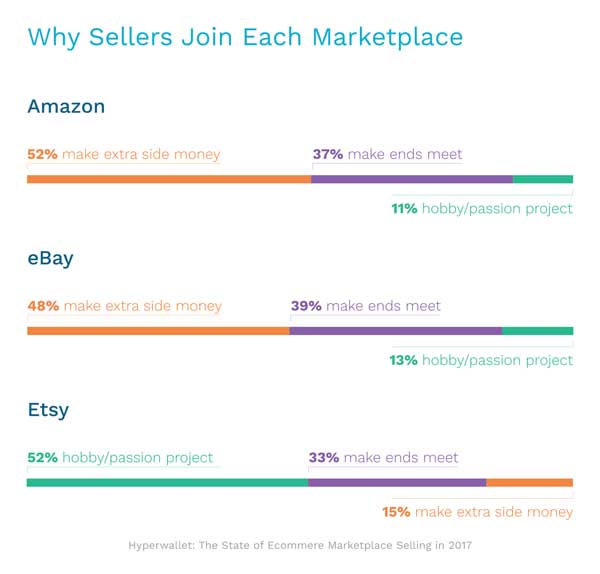 In spite of desires and hopes, it’s easier said than gigged. Nearly one in three responding sellers say that they have at times had to wait more than a week for a payment to be processed and delivered. Cross-border payments were cited as a particular difficulty, which a third of sellers polled said kept them from expanding to selling outside of the U.S. Sellers cited difficulty, inefficiency, and costs as the reasons for avoiding cross-border payments.

Prompt payments are very important to these sellers, with the impact of delayed payments including:

• 13% of sellers have had to miss or delay paying a bill, rent, or other obligation.

• 62% have had to sell personal property to solve a financial crunch.

Ting adds that even where such delays aren’t experienced, and the consequences not so severe, sellers can often become annoyed. Many, he explains, have grown up with technology, and speed of response is an expectation.

What they don’t understand is that payments don’t necessarily travel at the speed of email or an internet transaction. A mismatch exists between how quickly many sellers can ship and deliver physical products, and how quickly payments can be delivered, once the purchaser initiates them. This mismatch can put sellers in a bind where they need payments in hand in order to pay for their raw materials or other inputs for their final product.

Speed of payments ranks highest as a reason for loyalty to a particular ecommerce marketplace—59% cited it—after number of users and number of buyers, according to the firm’s overall findings. The top three ecommerce marketplaces are Amazon, eBay, and Etsy, and respondents using those platforms were asked for their top three reasons for remaining loyal.

Interestingly, only Amazon saw speed of payments ranked highest, at 69%. At eBay, speed of payments came in second among loyalty factors, at 53%. And at Etsy that was even lower, at 48%. The top factors at eBay and Etsy was, in both cases, the number of users/buyers on the platform.

The research found that sellers will switch platforms if they feel that the payment process is too frustrating—13% said that they have switched. Of those who switched marketplace platforms, nearly half did so because fees were too high, and nearly a third changed marketplaces because payments took too long to process.

And nearly 80% of sellers said that they would switch platforms if fees ranged too high.

Simply not being paid at all has also been a more common problem than might have been suspected. One out of four respondents said they had at some point not received payments for something sold over an ecommerce marketplace. And one in four report that customer service at the marketplace companies takes too long or is unreliable. 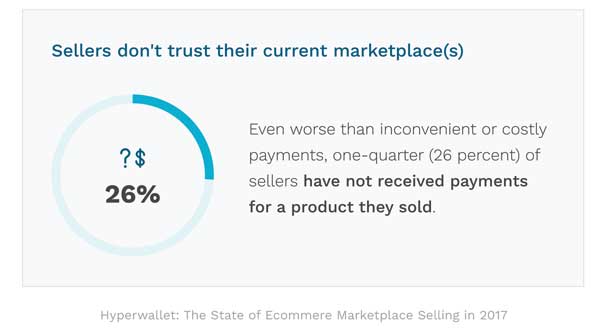 Banks get the message

With ecommerce continuing to grow, Ting says banks see opportunity in working to solve the marketplaces’ payments issues. Where banks have lagged, he says, is in technology. The banks’ payments capabilities often aren’t able to function at the same speed as the platforms.

The other factor is cost, which Ting says some banks are working on. Others, however, still charge hefty fees for cross-border transactions, which Ting credits to their not having adjusted to the “new economy.”

Payments must be seen as a critical part of ecommerce, and represent a key part of what platforms bring to the buyer and seller by establishing the “trust layer” of sales flow.

“Smaller sellers go to the marketplaces because they want that trust,” says Ting.

Without doing this all efficiently and reliably, Ting says, “then you are a glorified dating site.”

A growing challenge: the unbanked

Not addressed in the firm’s study, but of concern to Ting is a curve ball to the marketplace model: the unbanked.

He sees solutions being developed working from tools such as pre-paid cards that would use the ATM system in order to deliver cash into participants’ hands. Alternative payment methods, such as tapping over-the-counter services including Western Union or MoneyGram, would also fill the need.

“So there are a lot of ‘deposit’ products available outside of the traditional bank account,” says Ting.