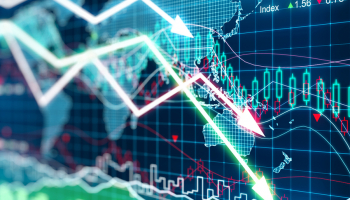 All things considered, a 3% drop in stock price was not bad on premarket trading of JP Morgan given its news on Thursday, but the stock is down more than 29% this year.

Profit declined by 28% for second quarter for America’s largest bank while earning was 12 cents short of most analyst expectations. Investment Banking fees were off by more than half, missing even the pessimistic mark set for second quarter by Wall Street. Morgan Stanley also missed expectations, primarily due to declines in its investment banking business.

The news is bad for banks in general, but particularly for larger institutions that rely heavily on institutional business verses retail business.

Jamie Dimon believes that interest rates will rise more than people think and reduce liquidity. If Dimon is correct, this will have a major effect on retail banking and could hurt the real estate market as well. If there is a silver lining, consumers are still spending and businesses are hiring.

Also, banks are in better shape in terms of cash than in previous volatile markets. Several midsize banks are scheduled for second quarter earnings reports, as well as most of America’s other large banks including Wells Fargo and Citigroup on Friday.

Dimon’s remarks also focused on the war in Ukraine, where he emphasized the result could be potential food shortages.

Americans were already feeling grim before this week’s earnings reports. President Biden’s approval ratings are hitting lows, with only 13% of Americans rating the U.S. economic conditions as excellent or good.

However, on Thursday the Dow Jones index was down more than 600 points, but rallied to close down just 143 points.