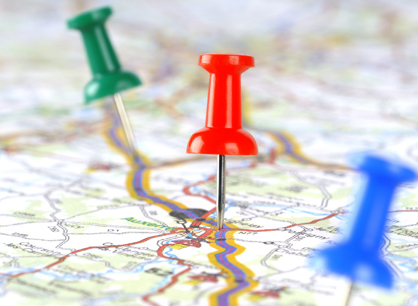 Banks opened only 193 branches during the quarter ended March 31--a drop of nearly 40% from the 319 branches opened in the prior quarter. Even in those states where banks continued to build offices, the net increase in branches was unremarkable. 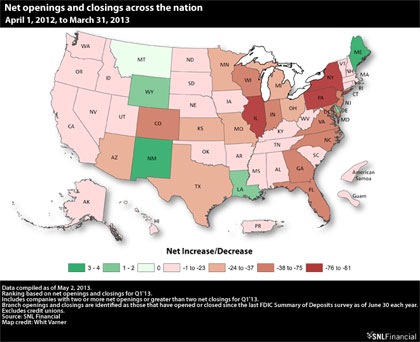 Ups and downs around the country

Over the last four quarters, only five states saw any net increase in branches--New Mexico, Maine, Wyoming, Louisiana, and Delaware. Meanwhile, Illinois, New York, and Pennsylvania experienced some of the biggest net declines in branch count. 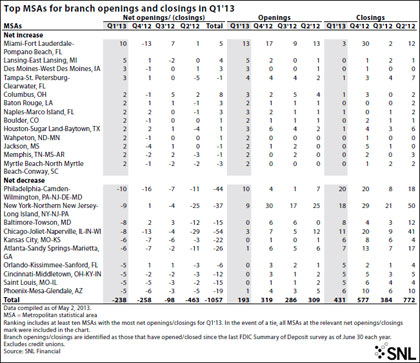 Interestingly, it was the Lansing-East Lansing MSA in Michigan that experienced the second-largest net increase in branches.

Janet Miller, president of bank branch consultancy The Lancaster Group Inc., said her company has done a lot of business in Michigan precisely because of the state's economic woes. Miller said Michigan is "in terrible shape as far as their unemployment," and as a result banks are more actively re-evaluating their branch networks there.

The New York-Northern New Jersey-Long Island MSA experienced one of the biggest net declines in branches during the quarter. Overall this area saw the highest amount of branch opening and closing activity during the year ended March 31.

Kevin Travis, a managing director with strategy consultancy Novantas Inc., called New York City "a highly competitive market" where banks are "fighting street corner by street corner." Still, he said "nobody wants to be the one to pull back first." 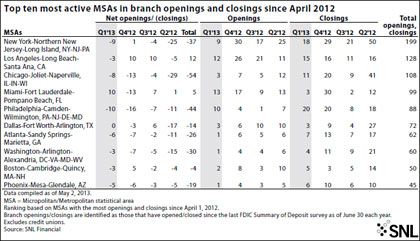 Banks have been closing more branches than they open for several consecutive quarters. Observers say the trend makes sense, given that branch transactions have been declining at roughly 6% per year as customers increasingly turn to mobile devices, online banking, and ATMs.

Travis said this decline is causing many banks "a slow death by 1,000 cuts."

"Sooner or later the industry has to restructure its distribution system," he told SNL.

Banks could have their work cut out for them: Travis estimates that around 25% of the nation's branches are structurally unprofitable. "Even if you assume that the number of locations should remain constant ... the physical facilities at all those locations are not fit for purpose in a lot of instances anymore," Travis said. "They have way too many teller windows, not nearly enough ATMs." The eventual changes will come with cost--Novantas estimates that the banking industry is facing roughly $40 billion in restructuring charges.

On the positive side, Travis said branch closures are not leading to customer attrition in the same way they used to.

"The general assumption was if you close a branch you're going to lose 25% to 40% of the customers that bank there. We're finding that those numbers are much lower and closer to 5% or 6%," Travis said. 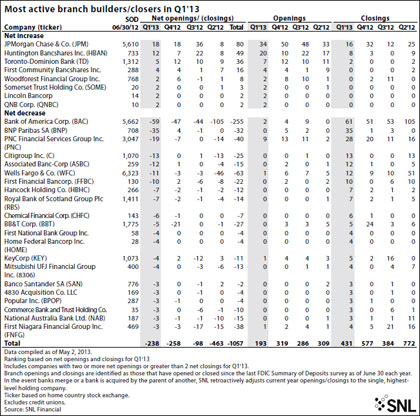 Of course, branches are still valuable in many circumstances.

"There's no way to do in-person sales without a branch," Miller said. "Even if you have a screen in front of somebody and they're standing in one of your branches that are totally virtual, you're still not putting the kind of physical pressure on them to make sales decisions or buying decisions that you would if it was a person seated 12 inches from you."

During the first quarter, some banks continued to grow their branch networks. Once again, JPMorgan Chase & Co. saw the biggest net increase in branches.  SNL Financial data indicates that the company opened 34 locations while shuttering 16.

During an investor presentation in February, JPMorgan said branches are critical to serving its customers, but noted that customer behavior is evolving.

"[W]e are responding by managing our branches to best serve our customers going forward," the company stated, adding that it expects to add a net total of about 100 branches annually in 2013 and 2014.

Companies like Columbus, Ohio-based Huntington Bancshares Inc. and Toronto-Dominion Bank also added more branches than they closed during the quarter.

"Our experience shows that when we open stores, we see significant market share growth," said Nandita Bakhshi, head of retail distribution and products at TD Bank. She noted that the bank opened 41 offices in 2012 and is on track to open 35 more in 2013.

"Our retail growth will be balanced with strategic investments through all of our delivery channels, including mobile, online, ATM and phone," Bakhshi said.

"Our goal is to provide the right network for our customers to do their banking, including banking centers, ATMs and digital banking," Donald Vecchiarello Jr., a spokesman for Bank of America, told SNL. "We constantly adapt our banking center network to fit customers' changing needs, including consolidating centers where we have overlap or investing in new centers where there's increased demand."

But not all big banks net more offices

"These actions include opening, renovating, and in some instances closing or relocating branches. This is all part of our strategy to serve clients with excellence throughout the world's top cities," Brent said.

"All of our research is showing that customers are increasingly using online and mobile channels as well as ATMs for their basic banking needs," PNC spokesperson Marcey Zwiebel told SNL. "As we continue to evaluate our footprint we're taking all that into consideration so that we can continue to serve customers as efficiently as possible."

The story is the same for many banks: Whether they are adding or subtracting branches, they are optimizing in the face of changing technology and new customer preferences.

"This is not what I would call a wholesale walking away from branches," said David Kerstein, president and founder of Peak Performance Consulting Group. "It's just a gradual fine-tuning of their networks." 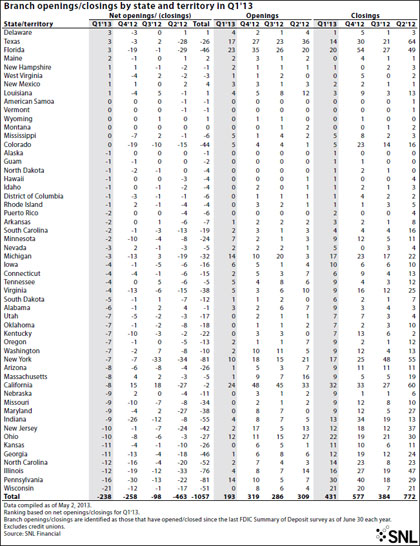