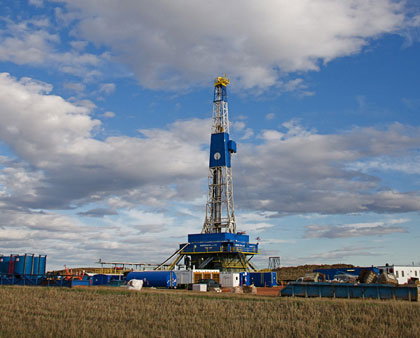 Oil rig near Williston, N.D., is one of the signs of the energy sector's rapid growth in the region. Another is growing population. Photo by Tom Reichner / Shutterstock.com

With the help of a booming energy sector, a population influx, and rising cropland prices, North Dakota community banks enjoy a tailwind to the top of SNL's list of best-performing community banks below $500 million in assets. North Dakota placed more banks than any other state in the top 100 banks. 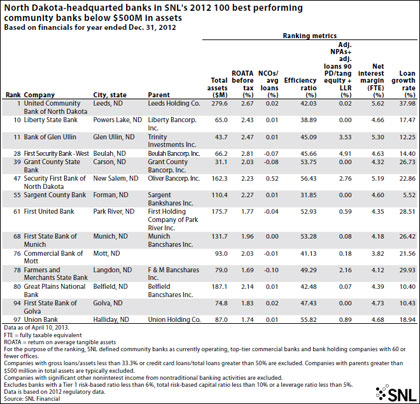 From 2010 through 2012, each of the eight N.D. metropolitan or micropolitan statistical areas experienced population growth, the largest being Williston, in the Bakken shale formation.

Williston's population increased 7.7% and is projected by demographic data provider ESRI to increase 21.7% in 2017 from 2012 levels.

Dickinson and Minot, also located in the shale-rich basin, are projected to increase by 10.6% and 9.7%, respectively. 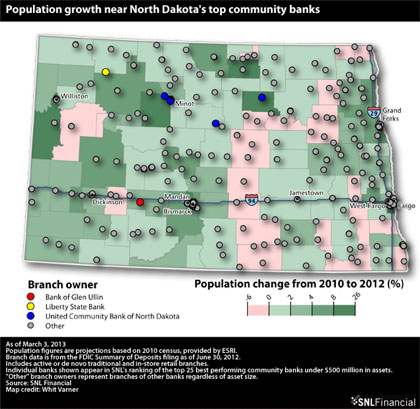 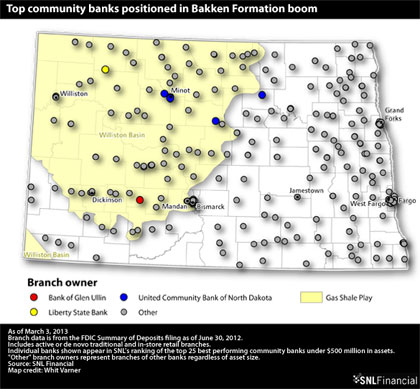 Given the dramatic changes as result of the energy sector and other service-based businesses, demand for housing is outstripping supply.

Additionally, according to the latest figures through February, N.D. boasts the lowest unemployment rate in the U.S. at 3.9%. 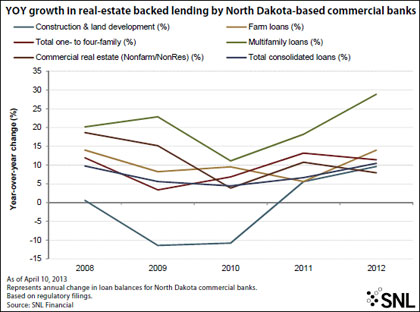 With the expansion of the housing supply and the ensuing development of service-based business, N.D. commercial banks have favorable conditions to grow their balance sheets. In aggregate, they were able to grow total loan portfolios 10.4% in 2012.

Multifamily housing loan balances increased 28.9% in 2012 from the prior year, compared to an 11.4% increase in total one- to four-family loans and 7.9% increase in commercial real estate loans.

Top-ranked United Community Bank of North Dakota had the highest overall loan growth among the top North Dakota banks during 2012 of 40.0%. The bank grew its multifamily loans by 104.7% and its construction and land development loans by 78.4%.

Liberty State Bank, runner-up for the North Dakota banks at 10th, grew its one-to-four-family construction loans by 136.5% during 2012, while Beulah-based First Security Bank -West grew construction and development loans by 281.6%, the most of any N.D. bank in the ranking.

In addition to the energy boom, North Dakota also benefits from rising cropland values. On April 3, 2013, the North Dakota State University Extension Service reported that N.D. cropland values appreciated by 42% in 2012, slightly lower than the 46% increase cited by the American Society of Farm Managers and Rural Appraisers.

"The question is whether this huge increase has capped a 10-year rise in land values, which has been the largest in the past 100 years, even exceeding what occurred from 1973 to 1981 ... North Dakota cropland values are now the highest ever, even when adjusting for inflation."

The report cites higher grain prices over the past five years than in any prior periods, as well as "strong" yields, as reasons for the rising valuations.

The results have been pretty clear in the production of wheat, where the 339.2 million bushels produced makes North Dakota the second-largest producer in the U.S. behind Kansas. For instance, the report cites that the three highest wheat yields in North Dakota have occurred in the past four years and mentions that "this [high grain prices and high yields] has provided several years of strong profit for crop producers, which has fueled their financial ability and desire to buy land."

These dynamics have enabled North Dakota commercial banks to grow farm loans 14.0% in 2012.

In addition to having the highest construction loan growth, First Security Bank-West grew its farm loans more than any other North Dakota bank in the ranking, growing balances 118.6% during 2012. Park River-based First United Bank was next in terms of farm loan growth with 47.3%, closely followed by Farmers and Merchants State Bank with 40.1%. 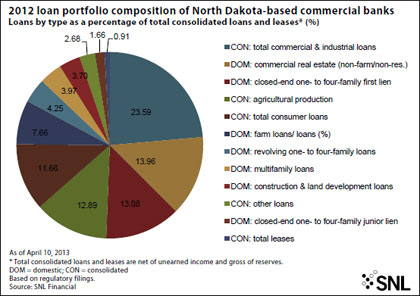