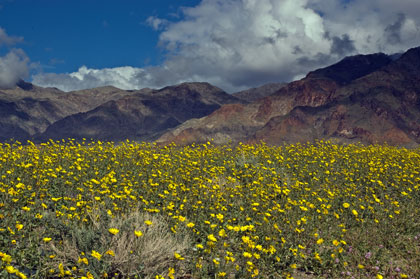 What do flowers blooming in Death Valley have to do with innovation in banking? Read on for the thoughts of Sir Kenneth Robinson, noted expert on innovation, who will plant more than a seed.

The history of the world, and the history of business, share a common theme: A landscape littered by the remains of the once high and mighty that fell to never rise again.

The British poet Percy Bysshe Shelley's sonnet "Ozymandias" sums this up neatly with the very short tale of a statue in the desert-rather, what remains of one.

Only two stone legs and a head still exist of the colossal statue that once stood proud and haughty. Those limbs, and the face of the statue, with its "frown, and wrinkled lip, and sneer of cold command." Beside those traces there is a plaque. As the poet wrote:

"My name is Ozymandias, king of kings:

Look on my works, ye Mighty, and despair!"

Nothing beside remains. Round the decay

Of that colossal wreck, boundless and bare

The lone and level sands stretch far away.

Bankers at ABA's National Conference for Community Bankers were treated to often-wry, always penetrating observations of a modern, Los Angeles-based Briton with a message bearing uncomfortable parallels to Shelley's.

Sir Ken Robinson, an internationally acclaimed expert on creativity and innovation, as described in ABA's program, at one point put up slides that graphically put Earth in its place in the cosmos. First he showed how our planet surpasses Mars and Pluto in size. Yet it is dwarfed by the giants of our solar system, such as Venus and Jupiter. And our sun dwarfs them all.

Yet, large as our sun looms, it in turn is dwarfed by suns that warm and light other solar systems.

Then Robinson put up a photo taken from the Hubble Space Telescope, showing billions of stars. Many, he pointed out, have their own tributary worlds in revolution around those suns.

This sobering view gave one a humbling perspective of how one individual, one industry, one planet, one solar system, amounts to so small a part of the known universe.

Quite a series of thoughts for a morning conference session.

A master of dry humor, Sir Ken, as he was addressed, brought his listeners back down to earth with this gentle chide:

"Whatever you woke up worried about this morning, get over it!"

Robinson, author of Out Of Our Minds: Learning To Be Creative, followed a panel of bankers who spoke on industry innovation. He addressed change, the need to tap creativity to bring it about, and the critical need to keep evolving or to face oblivion, like the empire of Ozymandias.

Robinson worked his being a Brit for full measure, noting that he had learned, in his time in this country, that Americans actually do understand irony. He also noted that he could not understand how the English ever acquired a reputation for being reserved. After all, the story of the British Empire, before and during its run, is one of attack, battle, and defense. How could a people whose modus operandi for generations was to attack other territories be considered "reserved," he asked.

But Robinson's humor about the British and their former empire held an important message, writ large and small.

"Large empires tend to collapse," said Robinson. "The greater they are, the louder they seem to thud."

"Every organization, be it a company or a country, has to start reinventing itself," he said, "or it starts dying."

Robinson pointed to Kodak as a recent example. The company invented the photography business, developing cameras, films, and more essentials of that technology. Yet today, in the age of digital photography, Kodak has faded away. Management failed to see where technology was headed, and failed to remain relevant, failed to lead.

Robinson cited three Japanese companies that once ranked in the top 30 corporations of the Fortune 500. Now, those firms have fallen into the relative obscurity of the bottom hundreds of the 500.

Management theoreticians tend to portray companies as diagrams of form and function, Robinson said, but this encourages thinking of them as if they were machines, structures around which to hang management practices and procedures.

"Companies are like living things," he said. "Organizations are much like organisms. They are made up of people who think things."

The British Empire became complacent and over-reached itself, said Robinson. In time, it faded away, through a combination of wars, economics shifts, and more. The Empire failed to adapt.

Organizations can go the same way, he said.

Or they can rebirth themselves.

He pointed to Burberry, once known chiefly for trench coats made of water-repellent Burberry cloth. The firm still sells the trenchcoats today, but it has expanded to many more items of clothing, licensing, and more. The company's financial reports contain this telling text: "Burberry has five strategic themes to underpin its growth: leverage the franchise; intensify non-apparel; accelerate retail-led growth; invest in under-penetrated markets; and pursue operational excellence."

Acknowledging the world around you

"Ten years ago, people didn't ‘tweet.' If they did, they were encouraged to stop," said Robinson. The rapid advances of technology, in both terms of what devices do, and how humans interact with devices, show how organizations must adapt.

Even within our digital age, reinvention and rethinking have become constants. Robinson noted how people reacted when the iPad came out, and they found it had no USB port.

"When I was a student in the 1970s, I would spend all day in the library," said Robinson. (He added that that this was a "student day," starting promptly at noon, and going for three hours in the afternoon.)

Now, he said, the internet allows students to find in minutes what he would spend hours rooting out of the library's stacks.

"Come on, I haven't got all minute," illustrates how far we have come in terms of demand for speed and delivery.

"There's a saying," said Robinson, that he finds to be true as new generations assess the world. "It's that ‘Technology isn't technology if it was introduced before you were born'."

Really great ideas generate more ideas, he said. Banking has increasingly seen this pattern redefining what a bank is, what a bank does, and how it fits into modern society.

Unleashing innovation in your bank

Humans have powerful imaginations, and "it's from imagination that creativity springs," said Robinson.

Traditional "command and control" management styles don't foster creativity, he insisted. A culture of innovation hinges on innovation arising in an organization reliably and as part of the organization's culture," said Robinson.

Yet in many companies, there is a tremendous disengagement from command and control philosophy.

"People want the boss to go away," he said, "so they can get back to Facebook."

The role of a business leader has evolved, in innovative companies, away from command and control, said Robinson. Being a leader doesn't entail having all the ideas and delegating their execution. Instead, now being a leader entails fostering a culture that creates "an organization that's full of ideas."

To illustrate what this looks like, he picked not a company, but nature.

In 2004, during the winter, something unseen for decades was seen in America's Death Valley: rain.

The result was that the aptly named valley came to life, for a  time. Precipitation allowed growth, and the Death Valley became carpeted with flowers.

"Death Valley wasn't dead," he said. "It was dormant."

Robinson said a company can learn from Death Valley. If innovation is encouraged, and if employees have opportunities to propose ideas, and know they will be taken seriously, "they will innovate."