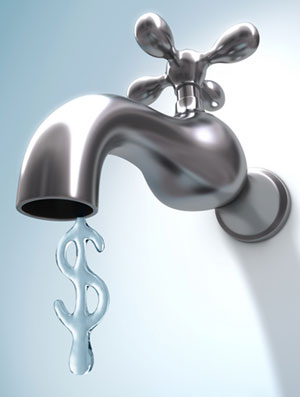 The banks have pushed their dividends higher in spite of roadblocks such as the regulatory burdens of the Dodd-Frank Act and Basel III, the collapse of interest rates, enduring economic uncertainty and sustained levels of elevated unemployment. Top dividend growers are also top producers, according to SNL's analysis. Their five-year median return of 65.17% surpassed the five-year return of negative 20.70% for U.S. listed banks and thrifts.

Republic Bancorp Inc.'s Chairman and CEO Steven Trager described earnings over the last five years as "extraordinary." In 2012, the Louisville, Ky.-based bank purchased two failed institutions--both without loss-share agreements--and paid a special dividend. Republic's 2012 common dividend grew 189.09% and has increased 312.21% since 2007, topping SNL's list of banks that increased their dividends by 4% or more every year for the last five years. Republic's capital management strategy focuses on responding "to great opportunity when it knocks on the door and [keeping] our powder dry," Trager said. 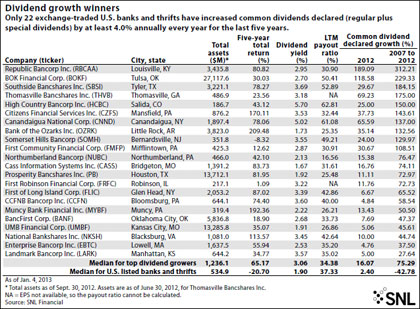 The bank prefers failed-bank acquisitions and organic growth over dividend payouts, Trager said, and management and the board consider peers' dividends when deciding where to peg its own. The 2012 special dividend of $1.10 for class A common stock and $1.00 for class B common stock was driven by the bank's net income for the year and a capital base that allowed for the payout, as well as potential tax ramifications for shareholders.

"The No. 1 priority we're focused on is growing the bank and generating income and serving customers," Trager said. "Dividends are a product of that if we are successful."

Even with the special dividend, Republic's payout ratio is still less than 35%, and management anticipates board approval for a regular dividend in 2013. No word if it will be increased.

The largest bank on the list is $27.12 billion BOK Financial Corp. BOK Financial introduced a dividend in 2005 and has "modestly raised it" every year, said CFO Steven Nell; in 2012, the bank grew its dividend 118.58% and has increased it 229.33% in five years. The bank's payout ratio for the last 12 months is 29.0%, excepting the $1.00 special dividend. Management is aiming for a 35% payout ratio before evaluating a greater increase. Like Republic, Nell said the special dividend was a result of 2012's exceptional earnings for the bank.

"We continue to maintain very high levels of noninterest revenue with our fee businesses, which represent almost half of our revenue streams," he said. "I don't have any fear that our dividend levels would be in jeopardy."

The bank prioritizes its dividend over buybacks because 61.72% of shares are owned by Oklahoma businessman George Kaiser and management has worked hard to create a floating, dynamic market on the NASDAQ. Kaiser has never pressured the bank to pay a dividend or grow it by a certain percentage, Nell said, adding that executives would prefer to deploy capital through organic growth and acquisitions. The bank has studied numerous banks, mostly in Texas, but declined to buy citing its disciplined rate of return.

BOK Financial did make one purchase in 2012, of wealth management firm Milestone Group Inc.; its last bank deal occurred in 2007.

Even as UMB Financial Corp. was upping its dividend year after year, it was deploying capital for acquisitions that bolstered noninterest income and diversified its revenue. The bank has a 50.79% loan-to-deposit ratio and a growing securities portfolio, even though loans have increased for ten consecutive quarters. But UMB also augmented the core bank with three major purchases--asset managers Reams Asset Management Co. LLC and Prairie Capital Management LLC and alternative asset servicer J.D. Clark & Co. Inc.--increasing noninterest income as a percentage of operating revenue to 56.70% for the last 12 months, said CFO Michael Hagedorn.

The bank still managed to increase its dividend throughout its transformative acquisitions, growing payouts 45.61% between 2007 and 2012, according to SNL data. Dividends are a higher priority than acquisitions in the bank's capital management strategy, he said, as management and the board believe investors should be able to rely on a bank in the long term for total returns, dividends and increasing share price.

Hagedorn said the biggest threat to its streak of increased dividends would be a unique acquisition that would entice UMB to retain more capital. Up to now, UMB has financed acquisitions entirely through retained capital and avoided private equity financing or issuing more shares or debt.

"For UMB, if we didn't increase our dividend in any one year, you shouldn't draw the conclusion that management is signaling things are tougher or will be tougher. It might just the simple fact we want to hold more cash in the holding company to possibly pay for an acquisition," said Hagedorn.

[This article was posted on January 25, 2013, on the website of Banking Exchange, www.bankingexchange.com, and is copyright 2013 by the American Bankers Association.]