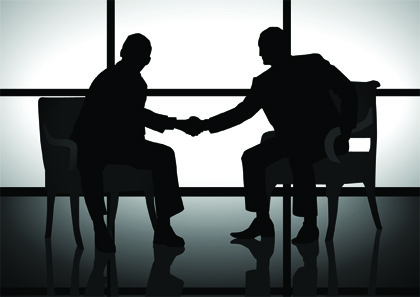 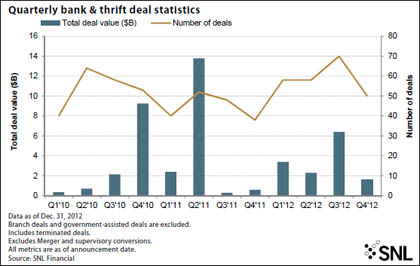 • Most expensive deal. The highest-priced bank deal since Jan. 1, 2010, was announced in March, when Houston-based Cadence Bancorp LLC said it would acquire Encore Bancshares Inc., also based in Houston, for $251.3 million. The deal was valued at 240.05% of tangible book.

Following Cadence on the list was another Houston deal: Dallas-based Comerica Inc.'s agreement to acquire Houston-based Sterling Bancshares Inc. came in at 229.70% of tangible book. 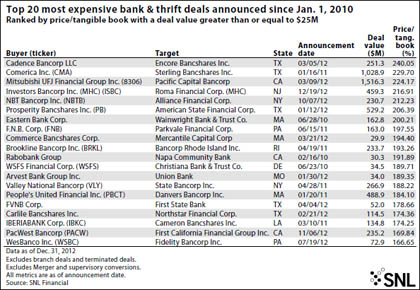 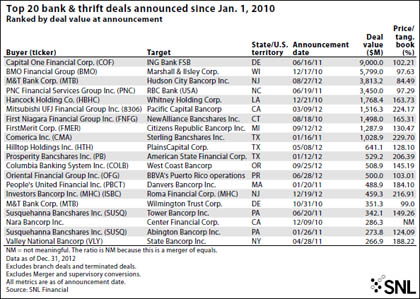 Since Jan. 1, 2011, the Midwest has been the most active region for bank M&A, with 129 deals announced, based on target region, followed by the Southwest with 65. 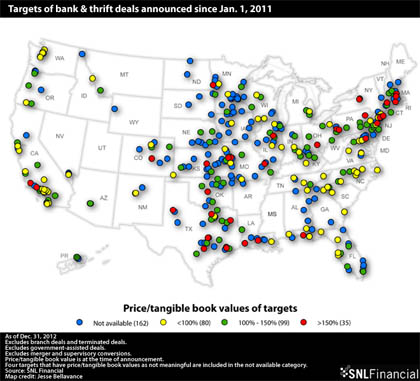 * Newtown, Pa.-based TF Financial Corp. announced Dec. 28, the acquisition of Roebling, N.J.-based Roebling Financial Corp Inc. ($161.8 million) for $14.6 million. It represents 86.2% of book and tangible book value, on a per-share basis. The deal is expected to close during the second or third quarter of 2013.

• Lansing, Mich.-based Capitol Bancorp Ltd. signed a letter of intent Dec. 28 to sell Albuquerque, N.M.-based Sunrise Bank of Albuquerque ($51.5 million) to a group of unidentified investors. Terms of the deal were not disclosed.

• Short Hills, N.J.-based Investors Bancorp Inc. (MHC) announced Dec. 19 that it will acquire Robbinsville, N.J.-based Roma Financial Corp. (MHC) ($1.84 billion) for $459.3 million. On a per-share basis, the deal value was 215.1% of book and 216.9% of tangible book. The aggregate merger consideration to be received by Roma Financial Corp. (MHC) minority shareholders is $113.5 million.

• Louisville, Ky.-based S.Y. Bancorp Inc. said Dec. 19 that it will buy La Grange, Ky.-based Bancorp Inc. for $20.0 million. The deal value marks 103.8% of book and tangible book value, on an aggregate basis. The acquisition is set to close in the second quarter of 2013.

• Danville, Ark.-based Chambers Bancshares Inc. acquired Decatur, Ark.-based Peterson Holding Co. and unit Decatur State Bank, according to a Dec. 8 report from The City Wire of Arkansas. Terms of the deal were not disclosed.

[This article was posted on January 18, 2013, on the website of Banking Exchange, www.bankingexchange.com.]