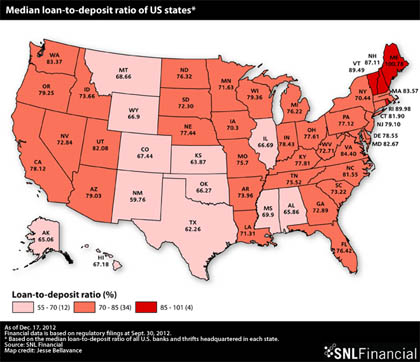 SNL looked at the third quarter median loan-to-deposit levels of banks and thrifts headquartered in each state. The study found that New Mexico had the lowest ratio at 59.76%, followed by Texas and Kansas with 62.26% and 63.87%, respectively. Maine had the highest ratio at 100.78%, followed by Rhode Island and Vermont at 89.98% and 89.49%, respectively. For a larger version of the map, click here or on the image.

The slower growth in loans widened the gap between aggregate loans and deposits to $2.93 trillion from $2.81 trillion one quarter ago.

The ratio of loans to deposits is perhaps one of the best indicators of lending capacity at banks, and the ratio has been steadily heading downward in recent years, reaching its lowest level over the last 19 quarters. The aggregate loan-to-deposit ratio stood at 72.14% at Sept. 30, down by 64 basis points and 126 basis points on a quarter-over-quarter and year-over-year basis, respectively.

Current levels are down significantly compared to the levels of four years ago. In the first quarter of 2008, aggregate loans accounted for 93.01% of aggregate deposits.

This shrinking loan-to-deposit ratio flies in the face of rock-bottom prevailing interest rates and government programs designed to boost lending activity, such as the Small Business Lending Fund. 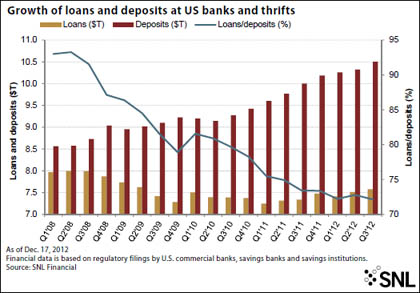 Bank size does make a difference when it comes to the lending business, as bigger companies have higher loan-to-deposit levels compared to their smaller peers. While the largest banks, those with greater than $10 billion in assets, had the highest median loan-to-deposit ratio at 84.71% at Sept. 30, the smallest banks, or those with less than $250 million in assets, had the lowest median ratio at only 66.59%.

Though the ratio has deteriorated for banks of all sizes in the last four years, the mid-sized banks, between $1 billion and $10 billion in assets, saw the highest decline in their loan-to-deposit levels. The median ratio for these mid-sized banks has fallen to 79.71% at Sept. 30, from 96.54% in 2008. 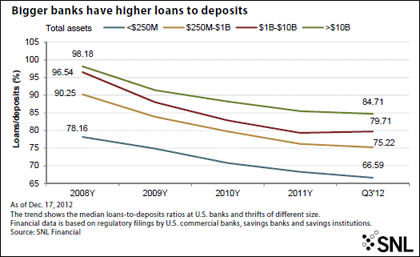 SNL identified banks and thrifts that saw the greatest changes in their loan-to-deposit ratios during the three months ended Sept. 30. The analysis included 15 operating banks and thrifts with total assets greater than $1 billion on a top-tier basis at Sept. 30.

The median loan-to-deposit ratio of these 15 companies was 92.65%, much higher than the median of 80.59% for all companies with greater than $1 billion in assets.

Minneapolis-based Marquette Financial Cos. saw the greatest increase, adding 1,865 basis points to its loan-to-deposit ratio during the quarter. However, most of that increase was thanks to a sharp decline of 16.3% in total deposits, while its loans grew by 5.5% during the third quarter. This is the first time that the company's lending portfolio has grown in the last 17 quarters. Prior to the third quarter, its loans had been consistently shrinking since the second quarter of 2008 and had more than halved to $663.8 million at June 30, 2012, from $2.3 billion four years ago. During that period, the company has shifted its focus from construction and land development loans to commercial and industrial loans and nonfarm, nonresidential commercial real estate loans, which represent 82.93% of its lending portfolio at present. 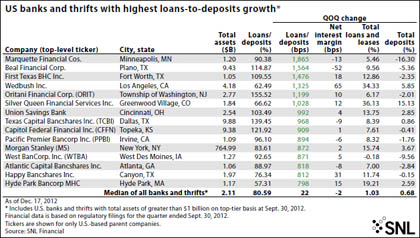 Silver Queen Financial Services Inc., Greenwood Village, Colo., also makes an appearance on the list with notably high growth rates of 36.1% and 15.1% in its loans and deposits, respectively. Over 90% of its lending portfolio consists of one-to-four family home loans and nonperforming assets accounted for only 0.62% of total assets at Sept. 30.

Some of the companies on the list have a loan-to-deposit ratio head and shoulders above the rest of the industry. Total loans at Oritani Financial Corp., Township of Washington, N.J., represent 155.52% of its deposits, which is the highest on the list. The company has been growing its lending portfolio consistently over the last 25 quarters. Oritani has more than tripled its loans to $2.1 billion at Sept. 30, from $667 million six years ago. Commercial and multifamily real estate loans account for almost 90% of its portfolio.

Seven of the 15 companies that saw the highest decline in their loan-to-deposit level reported actual declines in their lending portfolio during the quarter, while the others failed to grow their loans faster than deposits. New York-based Goldman Sachs Group Inc., the largest company on the list, saw its loan-to-deposit level slide to 93.71% at Sept. 30, from 102.92% at June 30. Its deposits grew by 7.3% during the three months ended Sept. 30, while total loans were down by 2.3%.

Youngstown, Ohio-based United Community Financial Corp.'s loans were down by 12.5% quarter-over-quarter to $1.1 billion at Sept. 30. The company's increased provision for loan losses led to a net loss of $26.9 million for the three months ended Sept. 30. Having offloaded nonaccrual assets totaling $66.3 million during the quarter, the company was also one of the largest sellers of nonaccrual assets, according to a recent SNL report. 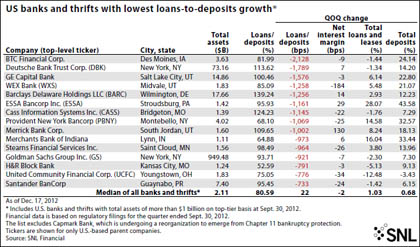 Total loans at Wilmington, Del.-based Barclays Delaware Holdings LLC accounted for 139.24% of its deposits at Sept. 30. Despite the company's lower growth rate in loans compared to deposits, its net interest margin improved by 14 basis points to 8.2%.

South Jordan, Utah-based Merrick Bank Corp. recorded a sizable increase of 130 basis points in its net interest margin, which stood at 22.65% for the quarter ended Sept. 30. Its fellow Utah institution, Midvale-based WEX Bank, posted a net interest margin of 21.92% at the end of the quarter. While Merrick Bank is practically purely focused on consumer loans, WEX Bank's portfolio is concentrated in commercial and industrial loans. WEX Bank's loans grew by only 5.5% compared to deposits that were up 21.1% during the quarter.

[This article was posted on December 29, 2012, on the website of Banking Exchange, www.bankingexchange.com, and is copyright 2012 by the American Bankers Association.]