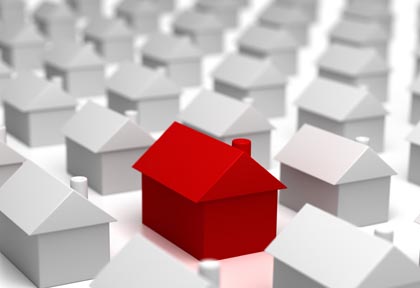 When crunching the numbers for TransUnion's annual forecasts for the mortgage markets, Tim Martin found something he'd not appreciated up until now: a split in the whole of outstanding mortgages that casts a more favorable light on current home borrowing than would be the case in the aggregate.

Recently TransUnion announced forecasts in both the home-lending and credit card delinquency areas. Trends seen in both areas were instructive, but the mortgage wrinkle speaks to more than credit.

Riding on the back of "normality"

The national mortgage loan delinquency rate is projected to fall to 5.06% by the end of 2013, from an estimated 5.32% at the end of 2012. (TransUnion classifies a mortgage as delinquent if it is in arrears for 60 days or more.) While that is good news, in its way, it is still not "great" news. That's because the "normal" rate of mortgage delinquencies should come in at around 1.5% to 2%, according to Martin, group vice-president of U.S. housing in TransUnion's financial services business unit.

On the face of the projections, Martin observed, while they are encouraging, "we would have hoped for a projection that called for a more substantive drop in delinquencies. If the pace of improvement does not pick up, it will take a very long time to get back to ‘normal' delinquency rates."

Martin pointed out that it took three years for mortgage delinquencies to rise to peak levels, and estimates that, given economic conditions and expectations, it could take nine years to return to normal delinquency rates, overall.

To illustrate, Martin described outstanding delinquent mortgages as a pool. "We're not adding a lot of new borrowers to the pool," said Martin. "However, we're not draining the pool that fast."

What's different? "Pre-recession, it was unusual for a borrower to go more than six months delinquent without either being able to cure their situation or go through the foreclosure process," Martin explained.

However, over the course of the recession and its aftermath, a combination of legislation, regulation, moratoria, and legal settlements has slowed the passage of delinquent loans out of the system and into foreclosure.

Also at work is a trend TransUnion has flagged in earlier work--the increasing tendency for consumers to protect their credit card lines first, as their ultimate source of liquidity, followed by their auto loans, and then, finally, by their home loans. Consumers with less at stake in their homes don't feel the traditional pressure to stay current on their mortgage, that used to be traditional.

Stuck in the transition process

The image of the proverbial "pig in the python" comes to mind, but it's a very long pig that's in the snake.

"The slow improvement pace that we are experiencing right now seems to be less about new borrowers not being able to make their payments and more about existing borrowers who have been delinquent for a very long time," said Martin. "For example, our analysis shows that the delinquency rate would fall to around 2.5%, or pretty much normal, if we simply took borrowers who haven't made a mortgage payment in over a year out of the calculation."

"Newer mortgages are performing well," Martin elaborated, and the portion of vintage mortgages that are delinquent is pretty stable.

"So it's not a credit quality issue so much anymore--it's more like the bad bank idea."

Martin referred here to the concept of backing bad loans out of the system. This was actually the original main purpose of the federal TARP program--to lift the chunk of bad credit out of the financial system for separate processing.

This is similar to the "bad bank" concept pioneered by Mellon many years ago, where bad loans were put into a bank chartered to be a giant workout entity. Other organizations have over time adapted variations on the theme and TARP was to have been something along those lines. However, a subsidiary purpose envisioned in financial crisis cleanup legislation became the centerpiece of TARP, as it related to banks: capital injections. These are the government holdings gradually being retired now.

Various government and private sector programs have attempted to work out solutions with similar effect, to reduce delinquent loans. But the overhang of delinquencies continues to linger in the overall numbers, Martin explains.

"There isn't even one state that is near normal," said Martin. On a state-by-state basis, TransUnion forecasts that delinquencies will improve in 34 states and Washington, D.C., with only 13 states seeing increases, by the end of 2013. This hinges on improving house prices and falling unemployment over the year. But the numbers remain historically high.

Washington's foot is on the brake

Martin was asked if TransUnion detected among its financial services clients any loosening of the mortgage purse strings in the wake of his findings. TransUnion performs these studies in part to identify opportunities for its clients.

Martin said he'd seen, and expected, no shift in the short-term.

The lack of closure that lenders face, with many Dodd-Frank mortgage issues still unsettled, keep lenders extremely conservative, he pointed out.

Some lenders are "dabbling," he said, for their best customers. But none of them are "driving in" with force, he added. He predicted that with the exception of government-guaranteed and secondary market mortgages, purchase mortgages won't pick up until the Dodd-Frank issues have been settled.

"It's going to take us a very long time," said Martin.

"The credit card delinquency rate continued to remain low in 2012 after reaching its lowest level since 1994 in the second quarter of 2011," said Chaouki. "We expect much of the same in 2013 as consumers have come to rely on their credit cards for liquidity with continued high unemployment rates and a stagnant economy."

The slight upward shift in delinquencies Chaouki indicated comes from rising originations, among other factors. Elaborating, the executive said that the growth in originations has in part resulted from nonprime borrowers receiving more credit cards, and becoming a greater portion of the nation's credit card base.

TransUnion noted, in both its mortgage and credit card research, that it's projections are based on a series of assumptions.

"The forecasts would change if there are unanticipated shocks to the global economy affecting recovery in the housing market, or if home prices unexpectedly continue to fall," the firm stated.