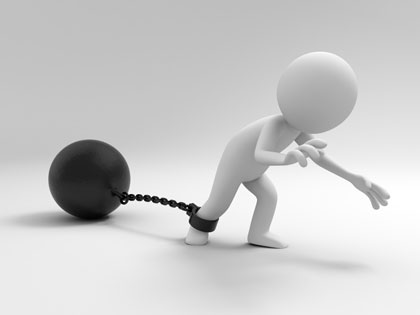 The number of new severe enforcement actions issued to banks and thrifts each quarter may be hitting multiyear lows, but the percentage of the industry operating under those actions still remains comfortably (perhaps "uncomfortably") north of 10%.

This is an improvement from last year's analysis, when 1,042 banks and thrifts were under severe enforcement actions, then accounting for around 13.87% of the industry.

However, this decline is somewhat tempered by the fact that 56 of the 1,042 banks and thrifts in last year's analysis have since failed--and mergers, internal reorganizations, and other actions precluded another 61 institutions from being considered in this year's analysis due to the fact that these companies are no longer considered to be "currently operating." [Thus, the adjusted total would have been 925, to put the current 909 in perspective.--Editor.]

Severe enforcement actions, as defined for and included in this analysis, include: prompt corrective action directives, cease and desist orders, and formal agreements/consent orders handed to a bank or thrift by a federal regulator. 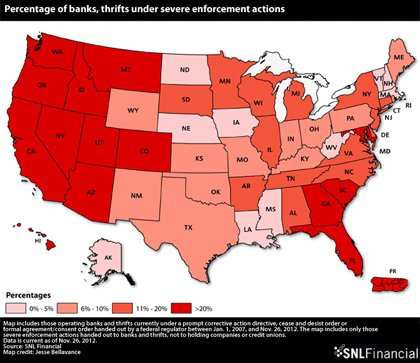 Only Alaska and Vermont had no banks and thrifts under severe enforcement actions this year. Alaska's sole bank under an action in last year's analysis, Alaska Pacific Bank, based in Juneau, had its cease and desist order, issued by the Office of Thrift Supervision in 2010, lifted by Comptroller's Office (OCC) this August.

West Virginia was the only other state besides Vermont to have zero companies on the list in the 2011 analysis, but First National Bank, based in Ronceverte, entered into a written agreement with OCC in October. In addition, Belington-based Freedom Bank Inc. received a severe enforcement action from FDIC in January.

On the other side of the spectrum, 14 states as well as Puerto Rico have more than 20% of their banks and thrifts under severe enforcement actions.

When it comes to sheer number of institutions under severe actions, as opposed to percentage of institutions, Florida stands on top with a nation-leading 77, followed by Illinois at 75, Georgia at 73, California at 51, and Texas and Minnesota tied at 45. 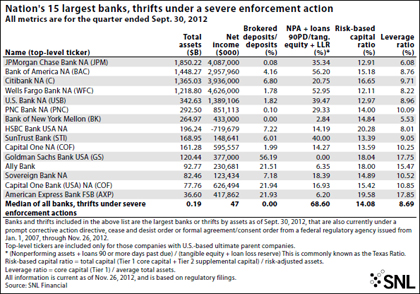 While the median asset size for all banks and thrifts under severe enforcement actions was only $186.7 million at Sept. 30, the nation's largest banking institutions are no stranger to severe enforcement actions. All four of the country's largest banks--JPMorgan Chase Bank NA, Bank of America NA, Citibank NA, and Wells Fargo Bank NA--are operating under three separate severe actions. Since last year's analysis, all four companies have entered into written agreements in February with the OCC related to their respective consent orders received in April 2011 tied to deficiencies and unsound practices in residential mortgage servicing and foreclosures.

In addition, Citibank NA was hit with a severe action in April for deficiencies in its Bank Secrecy Act/anti-money laundering compliance. Among other items, OCC states that the bank "has internal control weaknesses including the incomplete identification of high-risk customers in multiple areas of the bank" and that the bank "failed to adequately monitor its remote deposit capture/international cash letter instrument processing in connection with foreign correspondent banking."

Wells Fargo Bank NA entered into another written agreement with the OCC in December 2011 related to "illegal conduct and/or unsafe or unsound practices in connection with the marketing and sale of certain derivative financial products to certain municipalities and other nonprofit organizations (‘counterparties') in certain competitively bid transactions, during at least 1997 through 2006." Wells Fargo stated that the business units in question stemmed from its purchase of Wachovia Corp. in 2008 and that all employees involved with the transactions were no longer with the firm.