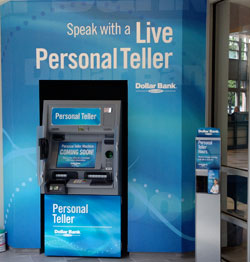 "We've gotten responses from customers like, `Wow! I wasn't expecting that! I thought this was an ATM and then suddenly Whitney was talking to me'," says Ben Benack, vice president at the bank. In this case, "Whitney" was a human teller sitting at a station miles away in the bank's operations center, communicating both visually and audibly through electronics with the customer.

Benack explained the bank's motivation for trying out these new machines and related some of the results they've seen in the 12 weeks since going operational. He spoke during the ABA telephone briefing "Leveraging Financial Self-service and Branch Transformation Technology to Reduce Costs, Enhance Customer Service, and Drive Market Differentiation. (For information about obtaining a recording of the conference, go to http://www.bankingexchange.com/old//Training/teleweb/Pages/default.aspx.)

Dollar Bank is a $6.6 billion independent mutual bank with 62 branches, roughly divided between Pittsburgh and Cleveland. "We compete against five of the top ten banks in the United States, and 15 of the top 50. It can be tough to compete against those larger entities. At Dollar we look to a combination of technology and customer service."

For several years, the bank had been interested in upgrading its remote teller channels through a relationship with NCR Corp., and through it, uGENIUS, which specializes in online video banking. Two recently added functionalities got the bank firmly on board, he says: the addition of drive-through capability, and the versatility of the new ITMs to also function as regular automated teller machines.

"Those two things made it very key to us to say it's now time to get moving on something we had been interested in for a good while," Benack says.

The bank set several specific objectives for the pilot, including: increased customer time and place convenience, introduction of extended weeknight and weekend hours, learning how self-serve and ITM technology can drive lower-cost branch design and customer service enhancement, and expanding the branch footprint and/or filling gaps in existing markets.

Deployment proceeded in several steps. An ITM was set up in the bank's operations center as a key test device for the software being developed. It became the initial employee pilot in a prelaunch phase, and will also serve as the testing and training device for new releases.

Then, at each of the two busiest, full-service branches in Pittsburgh, they installed a machine in the vestibule and another in a drive-through lane. Back at the operations center, five teller stations were set up to communicate with the remote machines.

Customers in those specific markets were informed through announcements, emails, and Facebook, that the hours for ITM use extended from 8 a.m. to 10 p.m., Monday through Saturday, a 50% increase.

Plans are underway to install another drive-through ITM at a new branch that is under construction.