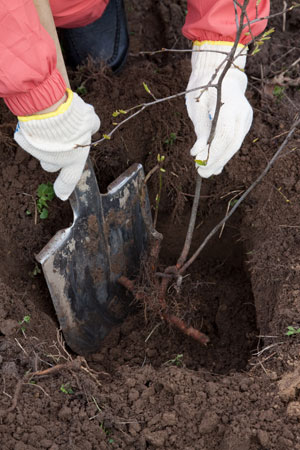 While bank branches continue to decline nationwide, parts of the West Coast and Southeast are bucking the trend, as their population density and anticipated long-term growth continue to make them centers of retail banking activity.

Expense reduction programs and the rising popularity of online banking aside, banks remain committed to strong branch presences in these areas, indicating that the branding and convenience that physical branches afford will continue to play vital roles in the competition for new customers.

Where branches remain warm
Among metropolitan areas with more than 1 million residents, the Greater Miami area led all metros in branch growth, with the bulk of the rest of the top 11 landing on the West Coast. The Los Angeles metro was second, followed by Greater Portland, Ore., and the metro surrounding San Jose, Calif. Also making the list were San Francisco, Seattle, San Diego, and Greater Sacramento, Calif.

Deposit growth, too, was strong in these regions.

In the West, San Francisco and Greater Portland were among the metro areas with the most deposit growth, as was the Greater Charlotte, N.C., metro in the Southeast.

To be sure, net branch growth was not robust anywhere, given the industry's penchant for cost-cutting in the wake of the downturn and the ongoing shift to online and mobile banking. But prominent metro areas in the West and Southeast nevertheless added to their total branch counts over the past year.

New branches are often smaller and staffed with fewer people, observers say, and this is likely to continue, as customers do more daily banking online.

And, nationally, branch counts are on the decline and are expected to continue to drop in number.

Boomers: where the money is

But the physical buildings are not dinosaurs yet.

But Brown noted that the massive baby boomer generation, as a group, grew up with branches and still prefers to do at least important transactions in person at branches, and banks know this. Warm-weather states such as California and Florida tend to attract retirees, too, and so this older generation will continue to factor strongly into banking in such states for years to come.

"Right now, baby boomers are the ones with the money," Brown said. "So branches will be relevant for some time."

States such as California and Florida were pummeled by the housing bust of the late 2000s and have struggled mightily since, with crippled housing markets and lofty unemployment. But observers say such states remain attractive long term: They have large economies and dense populations that inevitably will grow faster than many others, thanks to favorable climates and the likelihood of future job growth.

JPMorgan Chase & Co., for one, committed to adding branches and building out its West Coast footprint after it acquired the banking operations of Washington Mutual Inc. last decade. In fact, among the megabanks doing retail business on the West Coast, including Wells Fargo & Co. and Bank of America Corp., only JPMorgan grew its total branch count from 2011 to 2012. JPMorgan, Brown said, surely played a notable role in putting some West Coast cities in positive territory in terms of branch counts.

But Brown said several smaller banks have opened branches in key growth areas, too. He cited Umpqua Holdings Corp. as an example. Umpqua this year announced plans to open a flagship branch in downtown San Francisco and has said it intends to add more offices in the area.

Brown said that, for instance, the surging technology industry is fueling economic vitality in San Francisco and nearby Silicon Valley, "and so of course banks want to be in and around that."

And such pockets of strength are more likely to emerge in large, diverse states like California than in smaller areas. 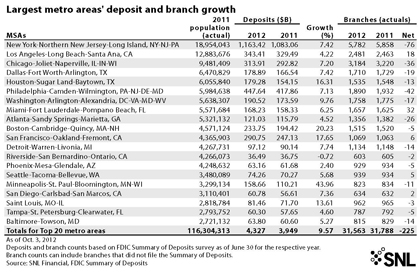 In 2012, moreover, major metros in the Southeast and particularly the West have begun to show positive signs of recovery.

From June 30 of last year through the same date of this year, unemployment fell by a full percentage point or more in the Miami, Charlotte, Los Angeles, Portland, San Francisco and San Diego metro areas, among others.

Home sector picking up, merger interest grows
Housing, too, is rebounding, after a long, brutal slog.

The latest S&P/Case-Shiller Home Price  Indices, for example, showed that home prices increased from June to July of this year in Miami and Charlotte, as well as in Los Angeles, San Francisco, San Diego, Portland, and Seattle.

Meanwhile, observers expect that deposits will consolidate in the hands of fewer banks, particularly in regions such as the Southeast that, while recovering, are still peppered with community banks struggling with lingering credit problems and mounting compliance costs.

"I think more and more banks are starting to realize they need to find solutions, and for many that means M&A," William Wagner, a managing director with Raymond James in North Carolina, told SNL.

Wagner anticipates that, in populous areas of the Southeast, for example, plenty of buyers will emerge over the coming years. He said that larger banks view the region as long-term growth territory and community and regional banks see it similarly. The latter banks consider acquisitions as a way to compete with the larger players.

Markets such as Charlotte and Miami will for years to come "attract people and money," Wagner said.


[This article was posted on October 19, 2012, on the website of Banking Exchange, www.bankingexchange.com, and is copyright 2012 by the American Bankers Association.]