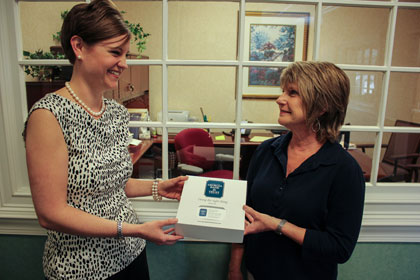 Life in a foxhole isn't Dan Blanton's idea of a good time.

Yet that's where he and the staff of $1.7 billion-assets Georgia Bank & Trust Company of Augusta had been living, he says, through the recession. The bank, along with many others around the country and in hard-hit Georgia, had its share of difficulties, and took its share of hits. Blanton, president and CEO, says that his people had been hunkered down, and he himself knew how they were feeling.

So, with results beginning to pick up, Blanton decided it was time for something dramatic. The bank's 22-odd business calling officers got this message: Clear this date and stand by. No one was told why, just told be in and be available.

On what Blanton informally dubbed "calling day," a few weeks ago, the bankers were issued boxes of chocolate chip cookies--the cookies were from the supermarket, though the boxes were customized to give the bank's name and message.

Marching orders: Go out and bring people cookies. Blanton says the officers were told they had to call on two new noncustomer firms for every existing customer they visited. And off they went.

Blanton says he didn't send the troops out with any hopes of a big win. The idea was to change the mood, to move on from worry and hunkering down to positive energy.

At the end of the day, the bankers' reward was a cocktail party, where each officer shared their experiences. Some new business, chiefly deposits, came along with the upbeat mood. The promise of some future credit requests also came along.

At the end of the party, Blanton felt his mission had been accomplished, and a new tradition started. He plans to have the team out doing these "cookie blitzes" every six months. Many of the members of the Georgia Bank & Trust of Augusta team that took to the field to get out of the foxhole.