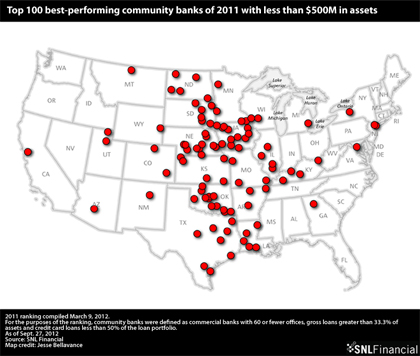 Just as students nationwide prepare to sit for midterm examinations, SNL checks the half-year progress reports of  2011's top-performing community banks with less than $500 million in assets. Commercial banks and savings institutions reported $34.5 billion of net income for the second quarter, an increase of $5.9 billion in profits compared with the second quarter of 2011. Through the first half of 2012, SNL data shows that many of the top 100 community banks report improved efficiency and asset quality.

For the purposes of the original ranking, community banks were defined as commercial banks with less than $500 million in assets, 60 or fewer offices, gross loans to assets greater than 33.3%, and credit card loans less than 50% of the loan portfolio. 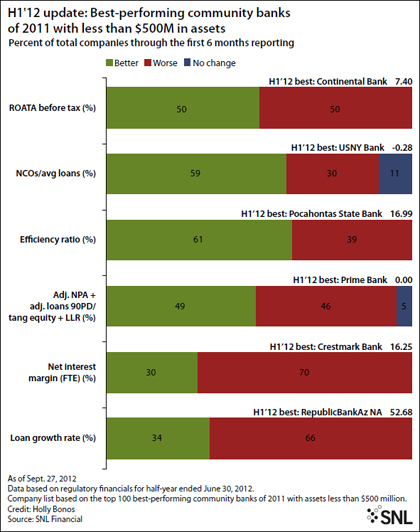 To view larger version of all charts and tables, click on the image

The story for net interest margins for community banks is more one-sided, as 70% of the institutions reported a decrease in net interest margin in the first half of 2012 from the end of 2011. The trend of squeezed margins closely mirrors the best-performing regional banks. Crestmark Bank continues to lead the top 100 community banks with the highest net interest margin of 16.25%, boosted by a 33 basis-point improvement compared with 2011. Crestmark is largely a provider of working capital solutions for companies through factoring and accounts receivable financing. Of its loan and lease portfolio, 94.4% are loans with a remaining maturity or repricing frequency of less than three months.

While growing loans continues to be a challenge for the sector as a whole, the challenge among community banks features more prominently than the top regional banks. Only 34% of the top banks increased loan growth rates, while 66% saw lending slow. Noteworthy is RepublicBankAz NA, which reported the highest annualized loan growth of 52.68% as Arizona-based banks begin to  climb back from the abyss. The growth of its overall portfolio was bolstered by the near doubling of its commercial and industrial loan portfolio over the past six months.

Looking at performance for the first six months of 2012, none of 2011's top-performing banks stood out in all categories. Peoples State Bank and Victor State Bank were each able to improve in five of six metrics. Amerasia Bank, the top-ranked community bank of 2011, was able to narrowly increase return on average tangible assets before tax by 4 basis points, from 3.34% in 2011. Fourth-ranked Prime Bank achieved an annualized return on average tangible assets before tax of 2.87%, an improvement of 26 basis points. The bank also improved its Texas ratio by 1.38 percentage points compared to 2011, bringing it to the minimum of 0% along with eight other institutions. 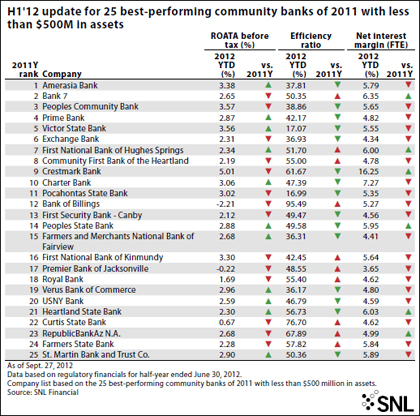 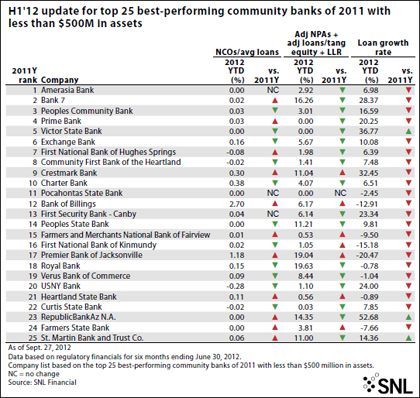