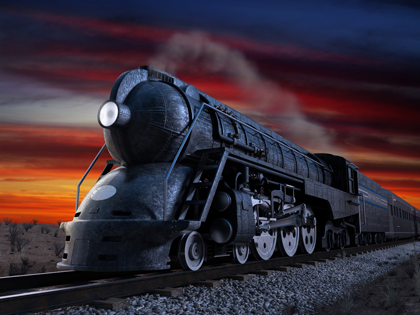 Tax policy and GAAP rules--admittedly, not the sexiest of topics. But an increasing number of banks appear to be reversing their deferred tax asset valuation allowances as memories of the financial crisis fade.

In basic terms, deferred tax assets result when an institution reports income for financial reporting purposes differently than it reports income for income tax purposes. Often net operating losses and allowance for loan losses make up the biggest chunk of a bank's DTAs.

Accounting standards require an institution to evaluate whether it is "more likely than not" that it will have enough taxable income in the future to be able to recognize those deferred tax assets. "More likely than not means there's more than a 50% likelihood that they'll be able to use the benefits in the future period," explained Robert Storch, chief accountant in the FDIC's Division of Risk Management Supervision.

If evidence suggests that a bank is unlikely to be able to use its deferred tax assets, the company must establish a valuation allowance. This was a common occurrence in the wake of the financial crisis, when many banks reported losses. A bank is stuck with this valuation allowance until it can prove that it is on the road to profitability.

"If you've suffered losses for the last three years, that's a huge amount of negative evidence, so that's a hard hurdle to overcome," said Raymond Kelly, a tax partner at Marcum LLP and national leader of the firm's corporate tax compliance practice group. 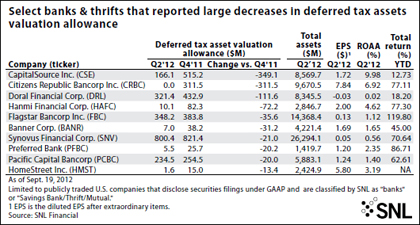 Even if a bank feels it is ready to reverse its valuation allowance, certified public accountants told SNL that it can be difficult for accountants and regulators to come to terms with management's judgment.

"Management's judgment is usually rosier than an accountant, and even more so than a regulator," said Manuel E. Pravia, a principal in the tax and accounting department at MBAF. "Financial auditors--and, to an even greater degree, regulators--look at it with a jaded eye: 'You say you're going to make money. Well, show me; don't tell me.' "

Kelly agreed that regulators can be particularly stringent. "I always tell my clients there are two different fights that you fight: There's a GAAP fight for your financial statements and a regulatory fight with your regulators," he said. "The regulators are very much cut and dried. They don't get into the esoteric view of the world that, 'Hey I'm going to be profitable, I have a look-forward financial statement,' that the auditors do."

Overcoming losses and proving that a bank is on a sustainable path to profitability may be difficult, but it is not impossible, as several banks have shown in recent quarters. As the financial crisis becomes more of a distant memory, more banks appear to be reversing their valuation allowances.

"In our regulatory reports, we don't actually collect any data on reversals of deferred tax asset valuation allowances," the FDIC's Storch said. "But from what I've heard at different banker events and that sort of thing, it seems like there are more banks beginning to reduce their valuation allowances as asset quality has improved and their charge-offs have reduced and their bad debt provisions for financial reporting have reduced."

BNCCORP Inc. is one recent example. On Sept. 14, the bank announced the reversal of "a significant portion" of the valuation allowance recorded against its deferred tax assets. The Bismarck, N.D.-based company said it expects to record a net benefit of approximately $8.8 million in the third quarter related to the reversal. BNCCORP shares jumped 10% that day. 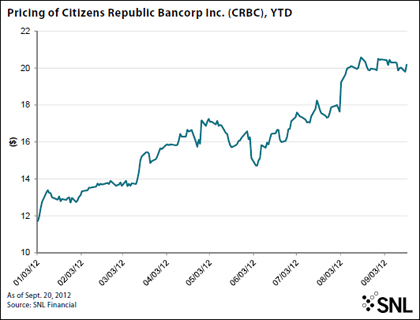 Flint, Mich.-based Citizens Republic Bancorp Inc. is proof that a struggling company can bounce back, reverse its valuation allowance, and thrive.

After  tackling persistent credit quality problems, Citizens Republic recorded its first profitable quarter in three years in July 2011. A year later, its quarterly earnings soared to $7.35 per share as the valuation allowance on its deferred tax asset was eliminated. The company recently announced  plans to sell to Akron, Ohio-based FirstMerit Corp.

Todd Reinstein, a partner at Pepper Hamilton LLP, said reversing a valuation allowance is a vote of confidence in a bank's future. "It's a positive sign obviously for a company," he told SNL. "There's a positive effect on your financial statement because of that."

As Kelly put it, a reversal tells the world that a bank is "back on track."

"You've demonstrated to your regulators and to your auditors that, 'Hey, I'm feeling comfortable with the bank, it has gotten its problems behind it, credit quality has improved,'" Kelly said. 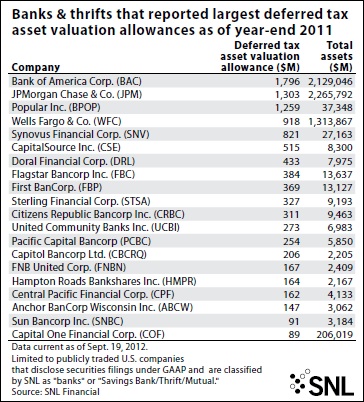