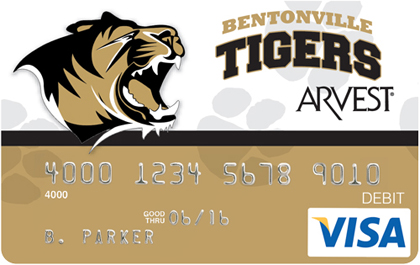 Jason Kincy's daughter plays shooting guard for the Bentonville, Ark., Tigers ladies basketball team, and every time Kincy makes a debit card purchase, he scores points with the team. He does that by showing his pride in the high school team by pulling out an Arvest Bank affinity debit card emblazoned with the team's logo and colors.

Kincy, who happens to be vice-president and marketing director at Arvest, is one of nearly 30,000 Arvest customers who supports a local cause, school, or charity through the $13.6 billion-assets bank's affinity debit card program. The bank, which operates through regional management in a four-state network of 250 branches, began introducing the program to schools about 18 months ago and has since widened eligibility to more types of organizations and expanded its reach through more of its territories.

When a school or cause becomes part of the affinity program, new debit card customers can ask for the special card at no extra charge, Kincy explains. Those who already have an Arvest debit card must pay a $5 card replacement fee, which covers the bank's costs of reissuing. Arrangements with the local organizations vary from group to group, with some simply gaining some exposure through the effort and others obtaining some type of financial compensation from the bank. This takes the form of a licensing fee or a donation per card issued. The bank has 42 arrangements thus far, and Kincy projects that total to come to around 60 by yearend.

While school teams and charities have comprised most of the partners so far, Kincy says the bank has had inquiries from other organizations whose members indicate interest in showing their affinity at the checkout point of sale--even some churches and some Native American tribes have shown interest.

"Really, anywhere you have a group of people with a common interest, you have potential," Kincy says.

In some markets the bank has enjoyed an exclusive with this idea, while in others competitors have also latched onto the concept for debit programs. Kincy says the local play works well for organizations with a "community banking" approach to their markets.

"We offer our debit cards to some really small schools that would not even be on the radar of the very large banks," says Kincy. Groups sometimes engaged actively in marketing the cards, in ways a very large organization wouldn't likely deem cost-effective. But for those whose compensation hinges on cards issued, there's a natural incentive there.

Making it work behind the scenes
Kincy's department becomes involved with every program, both in designing the card's look and making sure it meets the requirements of Visa's rules.

One issue that comes up, now and then, with school teams is their unauthorized use of the logos of major league teams. For a local team using the logo in a local market, this hasn't generally turned into a legal issue. However, putting a pro team's logo on a card issued by the bank under Visa raises the visibility and isn't permitted. Where a logo would infringe on pro team's rights, the marketing department helps the group find an alternative look that still works with its name.

Establishing programs also involves going through approvals and agreements with school boards, in some cases, and with school administrators, in others.

"It's just not something they'll enter into lightly," Kincy explains.

Building on local "brands"
The bank has been offering the program in about a third of its markets. In some cases the

bank reaches out to potential partners. In other cases organizations that have seen Arvest affinity debit cards contact the bank with their own ideas.

"This isn't so much a moneymaker for us," says Kincy. "It's really about exposure."

And about retention, of course. Who's going to dump and cut up the local team or cause?

Idea Exchange, a place where good ideas can be found and shared.

We first learned about this story through a tweet from Arvest Bank’s official Twitter account, @ArvestBank. We found out more through a good-old-fashioned phone call to Jason Kincy, vice-president and marketing director, who actually took part in one of ABABJ’s first social media feature stories. Kincy frequently speaks and writes about social media to banking audiences.