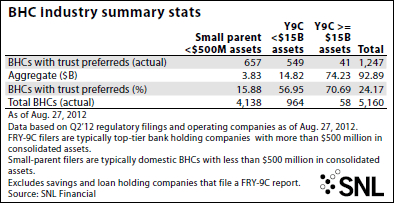 Banking Exchange Editor's Note: The proposed Basel III risk-based capital standards would remove the grandfathered trust preferred capital that some community banks have continued to benefit from, under the Collins Amendment to the Dodd-Frank Act. Objections to that part of the proposal were covered in last week's Basel III report. This story from SNL presents the big picture of what's going on in the markets on this score. To access ABA's Basel III page, click here.

By Nathan Stovall and Andrew Wolcott, SNL Financial LLC. This article originally appeared on the SNL website under the title "So long, farewell, auf wiedersehen TruPS." The article and the exhibits here appear with the permission of SNL.

Banks continue to redeem trust preferred securities in droves, slowly erasing the memory of the capital instrument once favored by the industry.

Trust-preferred securities, or TruPS, have become less relevant on bank balance sheets in recent years as institutions have built regulatory capital through earnings and common and preferred equity raises. This has coincided with new TruPS issuances drying up and banks redeeming the securities. The last issuance of TruPS from an institution of any size came in the fall of 2010, and not long after that, a number of large banks began redeeming TruPS since they knew the securities would lose their qualification as Tier 1 capital under the Dodd-Frank Act and effectively become expensive debt.

Redemptions have recently accelerated dramatically, coming in droves since regulators proposed capital rules in early June that confirmed TruPS issued by all banks--excluding small bank holding companies with less than $500 million in assets at year-end 2009--not just institutions with more than $15 billion in assets, would lose their regulatory capital status.

Since the proposed capital regime has come to light, banks such as JPMorgan Chase & Co., Citigroup Inc., BB&T Corp., SunTrust Banks Inc., Bank of America Corp., and others have announced or completed plans to redeem TruPS totaling at least $27 billion, according to research conducted by SNL.

Many of those redemptions occurred before the end of the second quarter, causing TruPS to make up even smaller portions of banks' Tier 1 capital bases by the end of the period. The amount of Tier 1 qualifying TruPS at consolidated bank holding company filers--the vast majority of which have more than $500 million in assets--fell to $89.3 billion in the second quarter from $111.0 billion in the first quarter, according to SNL data.

The redemptions and related preferred equity raises have been dominated by banks with more than $15 billion in assets. Those institutions long expected TruPS to lose their regulatory capital status along with the passage of the Dodd-Frank Act two years ago and the recently proposed capital regime only confirmed the change. 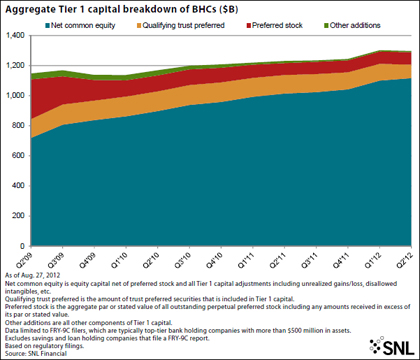 For a larger PDF version of this graphic, please click here or on the image above.

The shift has not been as pronounced at smaller banks, though TruPS have also become less relevant on those institutions' balance sheets. Many banks below $15 billion in assets are still holding onto their TruPS since the securities will be phased out over a much longer time frame, losing just 10% of their capital contribution per year under the proposed capital rules.

SNL data show that consolidated bank holding company filers with less than $15 billion in assets saw TruPS fall to 9.09% of their Tier 1 capital in the second quarter from 9.29% in the first quarter and 12.56% in the end of the second quarter of 2009.

Even with their declining relevance, TruPS still sit on the balance sheets of many banks, particularly larger institutions. Roughly 70% of banks with more than $15 billion in assets held TruPS at the end of the second quarter, but that number has declined from close to 76% in the first quarter. 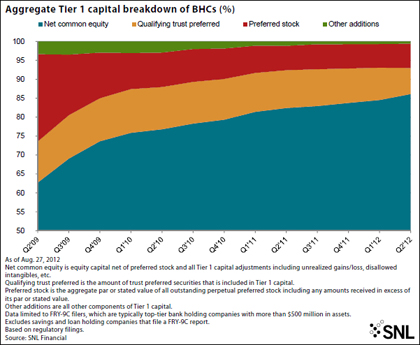 For a larger PDF version of this graphic, please click here or on the image above.

Nearly 57% of consolidated bank holding company filers with less than $15 billion in assets count TruPS as capital, while just 15.88% of small-parent filers have TruPS.

Fitch Ratings argued in a Sept. 5 report that future TruPS redemptions could depend on the strength of the institution and the coupons associated with the securities. Fitch said TruPS previously issued with lower coupons are less likely to be redeemed by financially healthy banks since they may find them a useful part of their Tier 2 capital. Fitch also said that it expects "very few" TruPS redemptions from financially stressed banks since those institutions will lack the capital necessary to complete the transaction and have limited access to new capital.

However, Fitch acknowledged that TruPS with higher coupons are more likely to be redeemed by financially-strong banks as they prepare their balance sheets to comply with the proposed capital regime. The TruPS in most of the recent redemptions carry coupons higher than 6% and occasionally as high as 8%. Those coupons are not only greater than the 5% to 6% coupons associated with preferred equity recently issued by large banks but they are also far more costly than the yields investors required in some recent debt offerings from sizable institutions.

Many banks that have that opportunity likely will take advantage of it and redeem outstanding TruPS. And as more redemptions occur, fewer institutions will hold and rely on the securities that once served as the favorite form of cheap regulatory capital for the industry.