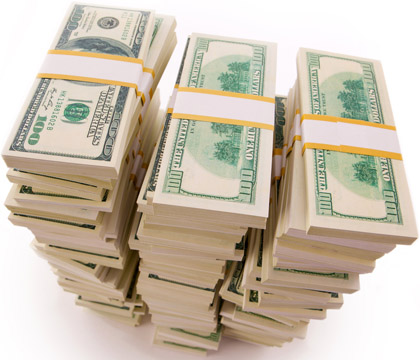 The good news is that community banks hold about $324 billion in equity capital. But the bad news is that they need to collectively raise $90 billion more.

Siegel is managing principal at StoneCastle Partners LLC, and a big believer in community banking’s future. His firm manages over $3.5 billion in client assets invested in community banks, and has made over $2 billion in direct bank capital investments.

He explained that StoneCastle, which started in 2003, stopped making new community bank investments in 2007, as its analysts began to detect changes in lending philosophy that were taking some banks that might have been attractive investments out of the firm’s comfort zone.

“We saw a lot of strategic drift, and we withdrew,” explains Siegel. More recently, the firm has been seeing an improvement to community banking’s condition and it may become active again.

In the meantime community banks must deal with the world as it is. The Collins Amendment took away future use of trust preferred forms of capital, or effectively did so for exempt banks, by destroying the markets it depended on. For community banks, that leaves common equity--the regulators’ preferred form, now--and preferred stock.
Strengths of the sector
Siegel is no cockeyed optimist, but he sees community banking through a lens that picks up factors about the sector that others have long taken for granted, or haven’t seen.

“Your banks do well what they’ve done well for years,” Siegel told his listeners. “That is to be boring. Banks are supposed to be boring.”

As an investor, Siegel likes banking best when it is predictable and without surprises. Indeed, he said, “regulators are not your enemy--they are your partner.” He said that the high degree of oversight the government maintains on banking provides a high comfort level to investors.

Financially, conditions have been better than some might think, if one takes the right perspective, according to Siegel. For example, he pointed out that 2% of U.S. banks failed last year. Not a positive, true. But it looks much better to an investor, he allowed, than the high-yield bond sector, which saw a 15% default rate.

And during the crisis, while the headlines were blaring bad news, said Siegel, over 5,000 banks not only didn’t lose money, but some of them turned a profit despite what was going on. And now, while many banks remain on FDIC’s problem list, he said, few institutions are degrading so that they will join the list.

As the chart from Siegel’s presentation shows, smaller banks exhibit many financial characteristics that are favorable compared to other institutions. 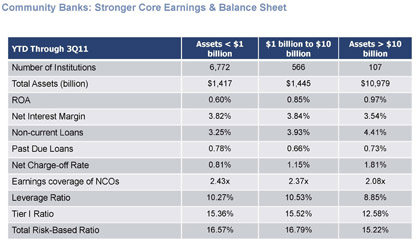 Why capital remains tough
In spite of those positives, capital continues to be a challenge for many institutions, though Siegel’s co-panelist Al Laufenberg of Stifel Nicolaus believes things will loosen up in the second half of 2012. (Read coverage of Laufenberg’s speech.)

Siegel explained that there are multiple reasons, and that the situation is evolving.  Some of his points:

Pricing gap. What investors are willing to value a bank at, versus what management thinks the bank is worth, continue to diverge.

Contingent capital. More and more investors are agreeing to invest in community banks, but with strings attached. For example, capital could be agreed to, but only if the bank hits some threshold triggering the agreement. This might be a downside trigger--such as hitting a level of weakness--or an upside trigger, such as shrinking the bank to the point where the infusion would be the factor pushing the bank’s capital ratios up to levels demanded by regulators.

Competitive investments. Smaller banks tend to rely on existing shareholders and board members for new capital because it is difficult to attract other investors unless the bank is “pristine” or is involved in an FDIC-assisted deal. 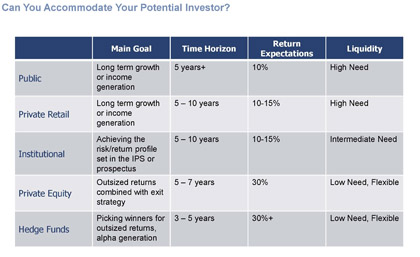 Each of these categories of investor have their own goals, time horizons, and expectations out of their investment. Likewise, their needs for liquidity differ. Note that the “private retail” segment includes local high net worth individuals, doctors, dentist, lawyers, and more. Source: StoneCastle Partners LLC  Click for larger version

At the same time, Siegel said that the community banking segment is shaping up for consolidation. While many are blaming this on the rising compliance burden, notably under the Dodd-Frank Act, that’s only part of the picture, said Siegel.

The age of banking leaders plays a key role, he said. The average age of community bank management teams is over 60 years old, said Siegel. Organizations without viable succession plans will need to look for acquirers. And for some institutions, the simple costs of operations have risen sufficiently to have many considering mergers in order to spread fixed costs over more assets.

The quest for capital that will result from these industry shifts will have banks looking to both traditional local sources, including the board, and to outside sources such as hedge funds and private equity.

Siegel said that bankers need to realize that they will be “selling” their bank to players with very different mindsets. Bankers are conservative by nature and, as a rule, all about risk management, said Siegel. That is how they make their money, in the end--judging risk and then taking compensation for the risks assumed. Loans, the main investment form, are typically illiquid, and have an average duration of five years.

Investors from hedge funds and private equity, by contrast, bring an entirely different thinking to the industry. “They are in the business of picking winners,” said Siegel.

Community bankers also need to consider why private equity is interested in their institutions, Siegel said. The analytical work necessary to evaluate a smaller bank differs little from that to weigh an investment in a larger community bank. Hence, said Siegel, if a private equity investor is looking at a smaller bank, and is willing to put a great deal of capital into it, that might not be such good news.

“You may serve as a platform for those investors,” said Siegel, “which I would not recommend.”

1. Be honest. Your regulatory data is public and can be crunched by the best. Siegel gave the outlines of his firm’s own RAMPARTS ratings system. “Qualified and knowledgeable investors know your positioning and results,” he said.

3. Have a vision, and make it clear. Why should you get capital instead of another bank?