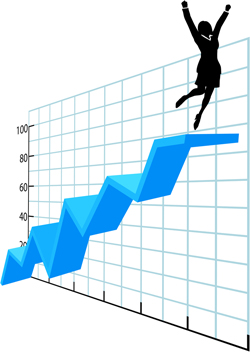 By Chris Brown and Laura Varas, Hearts & Wallets. For more about these frequent contributors, see the end of this article

The “women investors” opportunity has been making headlines.

The topic appears on conference agendas and, as researchers into customer needs and competitive trends, our firm of Hearts & Wallets is hearing more inquiries from broker-dealers, retirement plan providers, and investment managers about women investors. Women are a hot commodity as a marketing demographic for financial investment and retirement services.

Why? And why now?
Women ring the bell more often
A June 2011 study by Barclays Wealth and Ledbury Research found women were more likely than men to make money investing in financial markets.

One explanation is that women’s lower confidence about investing leads them to own lower-risk investments and to hold investments longer, strategies that have worked well recently. Academic research by finance professors Brad Barber and Terrance Odean, titled Boys Will Be Boys: Gender, Overconfidence, and Common Stock Investment, found that women outperform men on a risk-adjusted basis.

On the other hand, a headline at blog.themillionairenurse.com dares to blare a commonly-held notion: “Women investors: An oxymoron?,” and continues by asking “Do women make poor investors? Are they just afraid or not interested?”

The provocative headlines are a sign of the growing influence of this group of personal investors within the financial services industry.
Women represent a powerful investor segment
Mainstream financial services firms are ramping up their focus on women. Companies including TIAA-CREF, Wells Fargo, Raymond James, and Charles Schwab have programs in place to help its representatives address the unique needs of women investors. For example, Carrie Schwab-Pomerantz is leading Charles Schwab's "Women Investing Now" program with the goal of empowering this emerging segment of personal investors.

The reality is that women’s influence over family finances, along with their earning power, has been increasing for some time.
Women control or influence at least $16.2 trillion of U.S. household assets and are now sole head of 32% of U.S households, an increase of 18% in the past five years.

According to the Department of Labor statistics, single women represent about 19% of U.S. households, while single men represent only about 15%. However, both single and family households headed by a woman tend to control less money than similar households headed by a man. Analysis using Hearts & Wallets’ annual Investor Quantitative Panel, a nationally representative survey of more than 4,500 American investors, shows that sole female households control only about 13% of investable assets (much lower than the 19% of households that they represent), while female heads of households control only 4% of investable assets.

The growing monetary influence of women occurs mostly in married families. The Department of Labor’s Bureau of Labor Statistics shows that the contribution of wives’ income to family earnings has increased from 27% in 1970 to 36% in 2008. In 2008, the dominant structure was income from both wife and husband, representing 57% of households. Families with income only from the husband represented only 18% of married couples, down from 36% in 1967.

Perhaps the most compelling statistic is that, in 2008, 22% of wives out-earned their husbands! 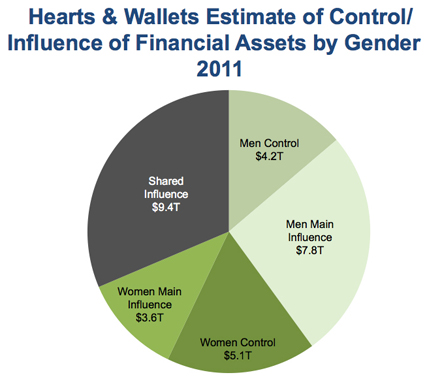 Going beyond simple gender segmentation
All this diversity suggests that to describe a group of people as complex as women as a “segment” may be an oversimplification. After all, there aren’t many talks on “men investors” on the agenda at any conferences we’re aware of.

In fact, portraits of three types of women--mothers of young children, widows, and middle-aged working women--show important differences, which financial services professionals should understand to better serve this demographic:

• Mothers with children under 13 have the highest anxiety about their financial futures (37% have moderate/high anxiety). Their #1 most-difficult financial task is “retirement planning,” yet they are among the women least likely to use a paid financial professional (only 16 % do), probably because the #1 most-important attribute they seek in a provider is “has low fees.”

• Widows, three-quarters of whom are already retired, have slightly lower anxiety (31% have moderate/high anxiety.) They are much more likely to use a paid financial professional (39%.) Their #1 most difficult task is “handling market volatility emotionally,” and the #1 attribute sought in financial services providers is “explains things in understandable terms.”

• Middle-aged working women have the most difficulty “choosing appropriate investments” in terms of financial tasks.

The “women investors” market segment really splits into at least three parts moms with kids under 13, widows, and middle-aged working women. But there’s more to it yet.

But these women turn out to be a little different, depending on whether the woman is the breadwinner or the “second” income. If it seems like targeting the breadwinners would make the best strategy, think again! Those who work, but are not the breadwinner in their family, tend to have higher household income, own more household investable assets, make higher allocations to retirement accounts, and are more likely to use a paid financial professionals.

Perhaps women who work, but do not bear the primary responsibility for income generation in their households, have the skills, interest, and the time to engage with investing. Perhaps there needs to be a different model to support female breadwinners.
7 ways women investors differ from men
Most firms aren’t ready for this level of detail on the nuances of different types of women investors. So even though looking at women as a group is a simplification, it is a useful one. Here are seven observations about what makes women customers of investment advisors different from men:

1. Women investors demand significantly more from financial services providers than men. Women investors are much pickier than men about their financial suitors, both in terms of firms and advisors, and the reasons for these preferences. Women want more from financial services firms than men for every attribute measured, in many cases by 10 percentage points or more.
2. Women find several key financial tasks more difficult than men, notably retirement planning, and are getting less help with this task. 56% of women find retirement planning difficult as compared to 51% of men.
3. More women than men also describe themselves as very inexperienced about investing and “anxious about their financial future.” A much larger number of women, 41%, say they are very inexperienced with investing as compared to 27% of men. More than one-third of women (35% of women versus 26% of men) feel moderate-to-high anxiety about their financial future.
4. Women are 50% more likely to be concerned about “making assets last throughout retirement/outliving my money.” (45% of women versus 31% of men) This heightened level of concern extends to all retirement issues.
5. Women are less likely than men to seek help for the tasks they find difficult. For example, only 12% of women seek help for retirement planning, resulting in an advice gap of 44%.
6. Only 15% of women have a good understanding of how their primary financial provider earns money, a key trust driver, as compared to 25% of men. Understanding of how the firms they work with earn money among women customers of leading firms is also lower across the board, and notably lower for certain firms.
7. The top three attributes women seek in a financial services provider is “has low fees” and “fees are clear and understandable,” and “explains things in understandable terms.” Women ranked these attributes at least 10 percentage points higher than men.
Overall, a demanding demographic
More women rate firm attributes as more important than men on every single dimension. As a result, it may be challenging for providers to deliver upon all that women want, while still keeping fees low, which is very important to 51% of women.

Hearts & Wallets believes the key will be in articulating service dimensions: women want to know what they’re paying for, how to evaluate providers, and how much they’re being charged. In fact, men want this, too. It’s really quite reasonable.

Once the value of services has been articulated, and a fair cost associated with it, providers might well find that some women are willing to pay for the investment services that they really want.

The diversity in the types of women--from mothers to widows to breadwinners to working women who provide their household’s second income—means there is a tremendous opportunity to be creative and build different bundles of services for different groups of women, along with different pricing options.