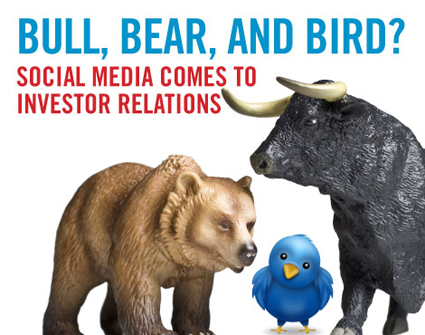 
When Renasant Corp., parent company of Mississippi-based Renasant Bank, announced its acquisition earlier this year of American Trust Bank of Roswell, Ga., it didn’t just send a news release. Renasant also posted the news on Twitter and Facebook.
Renasant, with $3.6 billion in assets, is one of the first publicly traded U.S. banks to use social media channels to communicate with shareholders and the investment community. Megabanks Citicorp and TD Bank are among other early adopters.
Will conservative banks “get social” for shareholders?
Perhaps reflecting their traditionally conservative stance, banks have been late to the party when it comes to embracing social media for investor relations purposes. Even old-line industrial companies such as Alcoa, the aluminum producer, are ahead of most banks when it comes to experimenting with innovative ways to share their investor news using the latest technology.

“We view social media’s role within investor relations as one that will only become more significant in the months and years ahead,” said Bradley Scott, product manager for investor relations at SNL Financial, a leading provider of investor relations websites, news, and data to banks. “Companies of all sizes are beginning to see the value of social media and that utilizing new technologies and communication methods can be beneficial to investors and ultimately their company’s performance.”

While investor relations departments may be slow to join the social media revolution, other bank departments are showing less hesitation. Globally, the number of banks and financial institutions using Twitter has soared from only 54 in early 2009 to nearly 1,400 today, according to Visible Banking, an Internet-based social media tracking service. The number of financial institutions using Facebook has grown from 128 in early 2009 to more than 700 today. At most banks, these social media platforms are being used to communicate with customers and the community, not with investors.

“As one begins to adopt it, others will quickly follow,” Heaps said. “The reality is that it takes one.”
Slow evolution from traditional channels towards websites and video
Until recently, the communication channels that investor relations officers traditionally used to reach out to shareholders, analysts, and investors had changed little during the past generation. They include news releases distributed over wire services, such as Business Wire or PR Newswire; quarterly conference calls with investors; presentations at investor conferences; road trips to meet with investors; and formal filings with the U.S. Securities and Exchange Commission, such as forms 10-K, 10-Q, and 8-K.

That began to change when, a little more than a decade ago, companies began using investor relations websites. Reminiscent of today’s angst about using social media, some executives failed to see the significance of investor websites and put little thought or resources into them. Gradually, that has changed to the point where investor relations websites are now considered by many companies to be a primary communication medium for reaching the public.

“The first thing that anyone in investor relations should do when thinking about social media is to first have a good website,” Heaps said. “The website is the home of your information and it where your investor proposition resides. It (the investor relations website) should be viewed as an effective communication channel and not merely as a depository for PDFs and data.”

The latest wave of new technology to hit investor relations is much broader than just popular social networking sites such as Twitter and Facebook. Online video is becoming more commonplace as an investor relations tool and a host of niche web services provide innovative new ways of sharing news releases, annual reports, PowerPoint slides, and other traditional workhorses of investor relations communications.

Canadian-based TD Bank Group is making greater use of online video. Ed Clark, group president and CEO, is one of several executives highlighted in videos embedded in TD Bank’s new interactive annual report. The bank also displays its videos on its own company channel on YouTube and has an active presence on Twitter and Facebook. Not surprisingly, IR Magazine honored TD Bank this year for having the best investor relations program in the financial services sector. 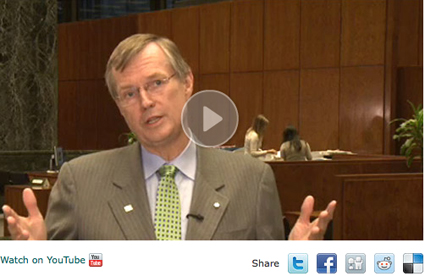 Ed Clark, Group President and CEO of TD Bank Group, in a video included in the bank's new interactive annual report and posted to YouTube. You can view the presentation here.
Following a trend that is rapidly becoming a common practice in investor relations outside of the banking sector, Citicorp’s chief financial officer, John Gerspach, posts a video each quarter on the bank’s YouTube channel and on the company’s own “new.citi” site in which he summarizes the quarter’s financial results. The video is posted on the same day as the earnings news release. Citicorp also shares videos from its presentations at investor conferences on YouTube.
Analysts and institutional investors see videos such as these as offering “high value” to help improve their understanding of companies and their quarterly results, Heaps said. Producing videos of this type no longer requires studios, camera crews, or expensive equipment, he added, so it is a technique that companies of all sizes can implement.
Outside the banking community, innovation’s quicker
While considered leading edge for the banking sector, even Renasant, TD Bank, and Citi’s efforts fall short of those of the more progressive companies in other sectors in terms of using new media channels to expand their investor communications.

Alcoa, for instance, makes broad use of Facebook in its investor outreach. During its most recent quarterly earnings announcement, Alcoa not only posted a link to its news release on Facebook but also posted the company’s updated PowerPoint presentation and instructions for joining the investor webcast. It has nearly 14,000 followers on Facebook and 2,600 on Twitter, so using these social media channels allows Alcoa to reach a much larger audience than merely posting its results to its website and using the traditional communication media.

Dell, the computer company, has been one of the most innovative companies when it comes to using new technology for investor relations. It is one of the few companies with a blog dedicated exclusively to investor relations. The blog includes video and commentary about the company that provides additional insights into Dell’s operations, products, and strategy.
Social becomes part of the game
One argument often raised by critics against social media is that analysts and institutional investors don’t use it for professional purposes. Even if true, Heaps says that argument misses the point.

“Even if they (investors) aren’t signed up for Twitter, the bloggers they are reading are,” Heaps said. “It’s really about the food chain and how information is disseminated on the Web today.”

An increasing number of studies show that analysts and professional investors are beginning to use social media to gain additional information about the companies they follow. One recent study by Rivel Research Group found that a majority of institutional investors say they read financial blogs and about a third use Twitter to track companies.

“If you ask investors if they are using social media, they may say no, but if you ask them if they are reading (financial blogs), you will get a much different answer,” Heaps said. “They may not associate blogs with social media, but blogs are very much a part of social media.”

“We’ve received great response from reporters,” Oxford said, adding that journalists often forward messages they see from the company on Twitter (called a “retweet”), which helps expand the company’s exposure.

“Many people have begun to rely on social media to get their news,” Oxford said. “They look there before they check the wire services.”
Risk in social media for IR?
Oxford dismissed the concern often expressed that using social media for investor relations is too risky.

New technology that some still see as experimental today appears destined to become part of the standard toolkit for investor relations officers in the future.

SNL’s Scott said their company views social media as “a major component of our long-term product strategy.”  He said SNL has been revamping their platform for investor relations websites to accommodate video, online slide presentations, and social media.

Prominent investor relations blogger Dominic Jones, founder of IRWebReport.com, made the case for social media in a recent blog entry: