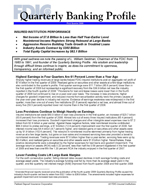 The banking industry overall, and all but one size category, saw positive earnings for the first quarter, compared with a $36.9 billion net loss in the fourth quarter, although earnings were 61% below a year ago. Community bank earnings, however, took it in the gut in the first

quarter, with all classes of community banks registering sharper drops compared to past periods than did the largest institutions, FDIC reported in its first-quarter 2009 Quarterly Banking Profile report. (To see the video of the FDIC press conference, click here.)

The $1 billion-$10 billion groups’ first-quarter loss marked its third quarterly loss in a row. This group also saw a loss for calendar 2008. That was the only category to do so for the whole year, in spite of the negative returns for all categories in 2008’s fourth quarter. Losses were reflected in these periods across both the commercial bank and savings institutions subsets of this size category.

Causes for first-quarter troubles
Regarding the first quarter, FDIC blamed the poor performance on the following factors:

• Increased goodwill writedowns. FDIC reported that goodwill impairment charges and other intangible asset expenses shot up by 157%, to $7.2 billion from $2.8 billion in the first quarter 2008.

These findings were cited for the industry as a whole, in FDIC’s official statements. Two other major issues came out in detail during the FDIC press conference on May 27, announcing the report’s release. These were a funding issue for community banks, and the issue of commercial real estate loan performance. Both are treated later in this report.

Working in the other direction, especially for larger banks, were two factors: realized gains on securities and other assets held, and sharply higher trading revenues.

“First quarter results are telling us that the banking industry still faces tremendous challenges, and that going forward, asset quality remains a major concern. Banks are making good efforts to deal with the challenges they’re facing, but today’s report says that we’re not out of the woods yet. As I see it, we’re now in the cleanup phase for the banking industry. It will take some more time. But in the end, we’ll have a stronger banking industry that’s better able to meet the demand for credit as the economy recovers.”

FDIC Chief Economist Richard Brown noted that the recession is the longest since the 1930s and is clearly taking its toll on loan performance and therefore on the banking system.

“The earnings report released by the FDIC today demonstrates that banks are continuing to work through the problems presented by a difficult economy. Though first quarter earnings are down from what they were a year ago, they are the highest they have been in four quarters, and two out of every three banks increased their assets in the first quarter.” [Click here for the full text of Chessen’s statement.]

However, these industrywide figures are misleading.

“Most of the improvement was concentrated among larger institutions,” the FDIC report noted. Officials explained that larger banks typically have a stronger percentage of their funding from wholesale sources, which typically adjust more quickly than do the retail funding sources that represent the strongest source of community bank funding.

More such chargeoffs may be in the offing. FDIC reported major increases in noncurrent loans, spanning the entire spectrum of major loan types.

FDIC reported that the rate of noncurrent loans now stands at its highest level since 1991.

Officials stated during the agency press conference that large numbers of institutions with commercial real estate loan exposures have high past-due rates in that part of their portfolios. Indications are that these rates have not yet reached their peaks.

Weakness in CRE lending “has not hit with full force, at this point,” said Richard Brown, the FDIC economist. John Corston, associate director for FDIC’s large institutions and analysis branch, predicted that the industry will see more trouble from CRE and construction lending in coming quarters, as the impact of a shrinking economy is felt more than it has been up until now.

While there will be further losses in the residential area, Corston’s point was that recognition of loans that are troubled seems to be coming to an end. The bad eggs have all been marked, so to speak.