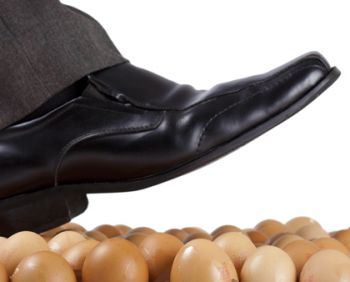 One false step can cost your company "face." Reputation risk means more for financial companies than temporary embarrassment, however.

After being blamed for their contribution to the mortgage crisis and economic recession, banks have experienced a steady procession of scandals, regulatory enforcement actions, and public relations missteps in the past several years.

Not surprisingly, the public's view of the banking industry has been increasingly unfavorable. In 2011, 86% of opinions shared on social media about European and U.S. banks were negative.1 Today's challenging climate, however, actually presents banks with an opportunity: Those that actively manage their reputation can generate more value from this intangible asset.

In the current business landscape, a company's reputation is more valuable--and more vulnerable--than ever before. Recent research found that 80% of the value of Standard & Poors 500 companies was attributable to intangible assets, including goodwill and reputation. 2 The greater availability of information and the emergence of social media have spawned myriad tools for tracking a company's reputation.

Bloomberg investment terminals now provide information about more than 120 environmental, social, and governance indicators as well as financial performance metrics on the companies that they monitor. These indicators, which are considered by some to be more forward-looking than historical data on financial performance, also affect reputation. Similarly, CSRHub offers corporate social responsibility and sustainability ratings on more than 7,000 companies. It culls its data from, among other sources, "best of" or "worst of" lists and social media.

Addressing the range of stakeholders

The challenge for executives of banks is to understand how stakeholders respond to reputation issues and take the necessary steps to mitigate risk. This task is complicated by the fact that each type of stakeholder views reputation differently. Banks need to manage four primary categories of stakeholders: investors, shareholders, employees, and customers.

Since the market calculates the value of businesses based on anticipated future earnings, a poor reputation can be an indicator of systemic problems, which can have an adverse effect on revenues. For this reason, investors increasingly analyze metrics able to provide a more complete picture of a company's performance.

Two large banks demonstrate a contrast in the impact of scandals on reputation. In 2011, when UBS disclosed a $2.3 billion loss caused by a rogue trader, the value of its shares fell about $4 billion in one day. CEO Oswald Gruebel resigned a week later. Investors' interpretation of these events as evidence of deeper issues were validated a year later, when UBS paid a $1.5 billion fine to settle allegations related to rigging the London interbank offered rate (Libor).

In contrast, when JPMorgan Chase acknowledged a $2 billion loss from its own trader (a loss that ultimately grew to $5.8 billion), the emphatic response of CEO Jamie Dimon convinced investors the incident was an aberration. As a result, the event didn't lead to lasting damage to the institution's reputation. 3

In the past, when a financial institution became embroiled in a crisis, shareholders typically would take their money elsewhere. Today, large pension funds, institutional investors, and activist shareholders seek to use their influence to alter the makeup of the board of directors and senior management.

Glass Lewis, a shareholder proxy firm, uses a pay-for-performance model that evaluates whether a company's top five executives are paid in line with the company's relative performance.

Glass Lewis' analyses have led the firm to advise shareholders to oppose some executive pay raises and vote against the reelection of certain board members. 4

Scandals that lead to heightened regulatory scrutiny can also draw the ire of bank shareholders. When Barclays had to pay a $450 million fine to settle Libor-manipulating allegations, American CEO Robert Diamond was forced out as part of an effort to rebuild regulators' trust. 5

Reputation has a pronounced impact on a financial institution's ability to attract and retain employees throughout the organization, not just top executives. A bank's approach to salary and professional development can contribute significantly to its overall reputation.

Morgan Stanley, for example, has changed its compensation structure for brokers in an effort to demonstrate a renewed focus on creating long-term value for the bank and its customers. For bonus pay, employees receive 50% of the total in stock over four installments. To date, Morgan Stanley is the only large institution to adopt this type of structure.

While the strategy has the potential to shore up its reputation and distinguish it from the competition, Morgan Stanley also runs the risk of losing employees to other banks. Its executives have expressed a belief that in the long-term the strategy will strengthen the institution's position and attract a different caliber of employee. 6

In addition to salary and opportunities for advancement, a positive work environment and support for local communities can burnish a bank's reputation. 7

A number of companies, such as Glassdoor and MyBankTracker, rank financial institutions according to measures such as work environment, governance, and corporate citizenship. Fifth Third Bank is among the institutions that publicize their corporate social responsibility efforts in order to highlight their contributions to the greater good and show that they care about more than generating revenues. 8

The largest banks have a different customer mix from regional and local banks. Therefore, it is critical for bank executives to understand and address the needs of their unique mix of customers.

In September 2011, Bank of America introduced debit card fees, a move that seemed to embody the public's worst perceptions of big banks. The resulting outcry and negative media coverage compelled Bank of America's executives to reverse course after only a month.

The misstep helped to build momentum for "Bank Transfer Day" and "Move Your Money Day," national movements urging customers to shift their assets to local banks. More than 650,000 people transferred their money to community banks in the month after Bank of America's announcement--a minuscule portion of the bank's 58 million accounts but a blow to the bank's reputation among consumers. 9

Meanwhile, regional and local banks generally are viewed favorably by customers and noncustomers alike, and this goodwill provides a valuable opportunity for institutions that can offer the right products and build a strong reputation for customer service.

Hancock Bank, which has 90 branches on the Gulf Coast, provides a potent example of the impact that reputation building can have on revenues. After Hurricane Katrina in 2005, with many residents lacking access to money due to power outages, Hancock set up makeshift branches--sometimes on no more than card tables--to serve its customers. The bank also distributed $3.5 million to noncustomers, a strong signal of its commitment to serving the community. As a result of its actions, Hancock won thousands of new customers and grew by $1.6 billion in the four months following Katrina, exceeding its total growth in the previous 95 years of the bank's existence. 10

The size, markets, and competition of an institution can influence how it approaches reputation management with each stakeholder category. Therefore, banks must develop a customized and balanced approach to maintain a positive perception. The following guidelines provide some direction.

Each institution should engage the groups that matter the most to its business, understand their priorities, and develop strategies to build positive perceptions among these stakeholders.

A comprehensive approach to risk management must consider the impact of events on reputation. Since reputation management spans functions and departments, effective execution often requires careful coordination across the organization.

Reputation should be discussed in bank boardrooms as a consideration in strategy, new product development, business expansion (including mergers and acquisitions), customer engagement, and employee attraction and retention.

Savvy financial institutions already have begun to incorporate the consideration of reputation into their business strategy. Although reputation doesn't appear on the balance sheet, bank executives should recognize that stakeholders are tracking developments closely.

1 "Public Opinion on Banks in the US and Europe on Social Media in 2011," Amplicate, January 2012, http://amplicate.com/social-media-analytics-reports/18-39-banks-in-the-us-and-europe/